You are here: Home / Reviews / Is Apple Pay Really Safe? What you need to know

When answering this question, One has to look at recent events that were in the headlines from not so long ago. In January 2014, one of the biggest retailers in the country, Target, announced that more than 70 million credit card and personal information of customers were compromised in a hack. This was an epic event in the history of retail industry.

Home depot reported that 56 million customer accounts were compromised. There was a lot of discussion pursuant to these events and banks and credit card partners introduced new technology to mitigate these risks. We have come a long way since the first credit card was introduced in 1950 by Diners Club. Millions of cutomers have come to depend upon their credit cards.

The question is how much can we trust our retailers and online merchants to protect this information given the recent spike in hacking incidents? 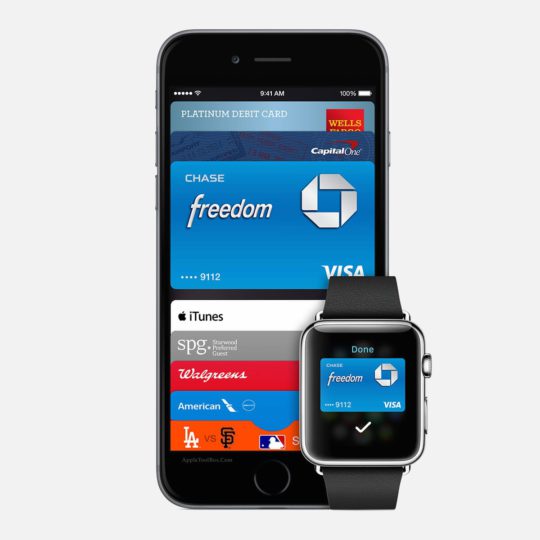 Paying in stores that accept contactless payments with Apple Pay uses Near Field Communication (NFC) technology between your device and the payment terminal. NFC is an industry-standard contactless technology designed to work only across short distances. Apple includes the NFC chip on your iPhone 6 models. When you make a payment using Apple Pay, it doesn’t use your debit or credit card number; instead, it employs a randomly generated number assigned to your card called a token. These tokens change with each transaction you make, so no one can duplicate them.

That’s a lot safer than a traditional credit card, which if lost or stolen can be used multiple times before you get around to cancelling it. Scrambling the actual credit card information makes it way safer than using the actual physical credit card with the merchant.  Although banks in US were initially slow to adopt and warm up to Apple Pay for multiple reasons, recently 27 new bank partners signed up to use Apple Pay. You can now also use Apple Pay at your Exxon Mobil gas station. Slowly but surely, Apple Pay is winning over the critics and is proving to be a very safe alternative to the physical credit cards that we have been using for ages.

THE CASE OF STOLEN IPHONE

Given that your device whether it is an iPhone 6 variant or Apple Watch can facilitate your Apple Pay transactions, what happens if these devices are stolen? Can some one use your device to make fraudulent purchases? Apple is very clear on this issue. Their website suggests that If you turned on “Find My iPhone” on your iPhone or iPad, you can simply suspend Apple Pay by placing your device in Lost Mode using Find My iPhone instead of immediately canceling your cards. This is a big help as we know the pain that we have to encounter in calling each of the card companies and attempt to cancel the cards when misfortune strikes.

Your credit and debit cards will be suspended or removed from Apple Pay by your bank or your bank’s authorized service provider even if your device is offline and not connected to a cellular or Wi-Fi network. You can also call your bank to suspend or remove your credit and debit cards from Apple Pay. As you can see there are multiple options to handle the issue around a stolen device.

There are other offerings as well in this budding e-wallet industry. Samsung has their Samsung Pay program and Google offers the Android Pay program. On the heels of Apple’s offering of Apple Pay, several retailers tried to bring their own unique offerings as well. A well noted program was the one offered by CVS pharmacy via their CurrentC program. It should be noted that this was subject to a hacking incident when it was offered.

When it comes to financial tranactions online, hackers are always trying to exploit and breach. One has to be careful when conducting financial transactions online. It is important that you pay attention to the screen and web page and remember that Apple Pay never asks you for your credit card during the transaction. Hackers are always trying to exploit the lack of knowledge on the customers part including trying to get around Apple Pay.

As Apple Pay has gained momentum this year, we are yet to find instances of any major hacking incidents that have impacted the customers that are using Apple Pay. Apple has taken major steps to make it very secure. Besides the NFC based chip architecture, Apple has integrated Touch ID and a complex passcode architecture into the mobile wallet system.

With all the headlines around Apple vs FBI recently, one can definitely feel more comfortable with the notion that your Apple Pay transactions are pretty safe when compared to using physical credit cards in transactions. In the next few weeks we will cover and show you how to set up and use Apple Pay on your iPhone and Apple Watch.

We would love to hear your comments if you are planning to sign-up and use Apple Pay or if you have started using it. Similarly for the folks that are sitting on the fence with this new technology, please share what your main concerns and insecurities are when it comes to switching to this new technology offering.