After a long time of waiting, hearing rumors, and talking about several potential teams, Pangu released the next jailbreak. The Pangu team has once again took over with the release of jailbreak for iOS 9.1 today.

The tool is now called Pangu v1.3.0 with compatibility to jailbreak only 64-bit devices. In a nutshell, those that will be able to take advantage of this version are users with iPhone 5s and up and iPad mini 2 and up.

Before we actually go into details on the steps to jailbreak your iOS 9.1, it’s important to note that this tool was made available thanks to the  kernel bug from Lokihardt. Unfortunately, it was fixed in iOS 9.2.

There are a few things iPhone and iPad users should be doing before they can jump straight to Jailbreak their device. First, it’s important to backup your device via either iCloud or iTunes. You never know what will go wrong during the jailbreaking process and you don’t want to lose all your data if any of that actually happen.

Second, turn off Touch ID and Passcode (Settings > Touch ID & Passcode) and Find My iPhone from Settings > iCloud > Find My iPhone. Keep in mind that you will only have to disable these features temporarily. Once you’ve successfully installed Cydia, you can always turn them back On. 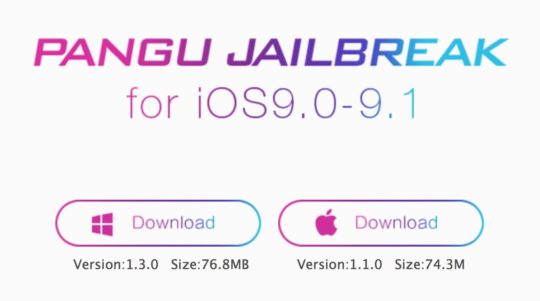 How to Jailbreak iOS 9.1 using Pangu

Step 1: Download the latest version of Pangu for Mac or Windows from their official site

Step 2: Connect your iPhone or iPad to the computer

Step 4: The Jailbreak will then begin and you’ll be required to turn on and off Airplane mode

Step 5: Pangu will install their app to your home screen. Tap on that when instructed

Step 6: Additionally, they will also ask to have permission to the Photo Library

After awhile, your iOS device will be rebooted. And your iPhone is now jailbroken with Cydia installed. Launch the application so that it can reload all packages and you’re done. If you’re one of those unfortunate users that can’t take advantage of this tool, please know that iOS 9.3 Jailbreak is on its way.