Apple reached a new milestone today. According to the latest tweet from Tim Cook, the appstore earnings set a new record for the month of July. This month also marked the highest-ever monthly billings and money paid to developers.

Developers have earned more than $50 billion so far!

This new milestone announcement comes from Apple at the heels of the announcement that the company sold its 1 billionth iPhone this month.

As users anticipate the release of the next generation iPhone on Sept 16th, Apple is proving that its revenues from Appstore are going to be a fundamental catalyst for its bottom line numbers moving forward.

The services revenue reported this quarter saw a 19% spike over the same period. With Apple choosing to allow more freedom to its third party developers via Siri integration and a new Watch 2.0 expected this fall, the Appstore is bound to see new records as we move forward. Apple has also changed the terms of payments for its third party developers. According to the new terms, the developers will be able to keep incremental revenue share for their app sales. 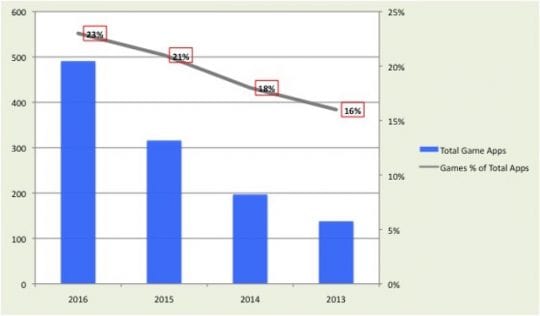 Interestingly, the number of apps that are game based have been growing as well. The percentage of game related apps has grown from 18% in 2014 to 24% in July, 2016. Given the success of Pokemon Go, one can assume more interest in this category from the third party app developers.