Apple released Mac OS X 10.6.4 on June 15 in both standard and server editions. The update includes the recently released Safari 5.0 and fixes a number of issues we have documented with the Mac OS X 10.6.3 release.

Among the highlighted improvements:

The new release is available via Software Update or from the following download links:

There is a routine that will eliminate 99% of show-stopping issues after any incremental Mac OS X update. If you’re experiencing such a problem (i.e. a disruption of your workflow), start with option #1 and continue to work your way through the process until your problem is resolved.

Download the Mac OS X 10.6.4 combo updater, which weighs in at a hefty 887MB but is a troubleshooting godsend. Quit all open applications and run the installer.

Booting your Mac in Safe Mode then simply restarting normally is one of the most overlooked, most effective procedures for solving a variety of issues after an incremental Mac OS X update. The reason for its efficacy: booting in Safe Mode forces a disk directory check, clears potentially problematic cache files and performs other routines, detailed here.

Downgrade to Mac OS X 10.6.3. Although this option eliminates important security fixes included in Mac OS X 10.6.4, along with any other enhancements, it may be the best option if a problem is interrupting your workflow and options #1 and #2 prove ineffective.

Reinstall (if you don’t have a current Time Machine backup). Insert your Snow Leopard installation disc, then restart while holding down the C key. When prompted, choose the normal “Install” option. Make sure to select “Preserve Users and Network Settings.”

After installation, you’ll be left with an earlier iteration of Mac OS X 10.6.x (most current retail discs include Mac OS X 10.6.2), but an otherwise largely intact system. Download the Mac OS X 10.6.3 combo updater and apply it if your disc has an earlier version of Snow Leopard. You may need to restore some saved username/password information, browser information, etc.

Some users have reported graphics issues, including lags, stalls or slowdowns in video playback, artifacts or corruption (particularly when moving windows) and more after updating to Mac OS X 10.6.4.

Users have also reported complete system freezes when exiting a screen saver, sometimes in conjunction with VMware. This problem may be accompanied by the error message “A serious error has occurred inside your computer’s OpenGL graphics drivers.”

Other users have reported issues with Steam from Valve and some Blizzard games including Starcraft 2.

“The recent 10.6.4 update from Apple has noticeable performance issues for NVidia graphic chip owners running high-performance games. If you wish to avoid this, you should consider waiting to install the 10.6.4 update until Apple has had the opportunity to address this issue.”

These issues may be related to OpenGL changes made in the Mac OS X 10.6.4 update.

Speculation now holds that some cases of this issue may be caused by graphics card heat problems, which can cause degraded performance or the aforementioned artifact/garbling issues. As such, two new potential solutions have emerged.

Rest SMC. Some users have reported that resetting the SMC, which may restore proper fan behavior, thereby cooling graphics components resolves this issue.

smcFanControl. Other users resort to the utility smcFanControl, which can control fan speed. Users report success in setting the fan speed to roughly 5,000 RPM when engaging in graphics-intense activities.

Failing the above, try the fixes outlined in the “What to do if you have a serious problem right after updating” section.

Some users have experienced persistent crashes in Adobe Photoshop CS5 and After Effects CS5 after the update.

Adobe released Photoshop CS5 12.0.1, a minor update that addresses some crash issues that have occurred in conjunction with Mac OS X 10.6.4, particularly some problems related to fonts.

If you are still experiencing crash issues after the update to Photoshop CS5 12.0.1, try the font troubleshooting procedures outlined in this Adobe TechNote.

Some users have reported loss of internet connectivity after the update to Mac OS X 10.6.4. These users have active IP addresses but cannot access any outside network services.

Set manual IP address. It appears that some instances of this issue are caused by DHCP problems and can be resolved by manually setting the Mac’s IP address; follow these intructions.

Boot in Safe mode and apply combo update. Booting into Safe Mode may temporarily restore your Internet connection, at which time you can reapply the Mac OS X 10.6.4 combo updater, which may resolve the problem. To boot in Safe Mode, hold the Shift key while your Mac is starting up. After booting in Safe Mode, download the Mac OS X 10.6.4 combo updater, which weighs in at a hefty 887MB.  Quit all open applications and run the installer.

A handful of users have reported significantly slower system startup after the update to Mac OS X 10.6.4. There are a variety of causes and corresponding fixes for this issue (which crops up for some users after virtually every Mac OS X update), but there are three commonly successful, easy procedures that can eliminate the issue in most cases.

Before beginning these procedures, note that the first boot after a Mac OS X update often takes longer than normal. If subsequent restarts occur at a normal speed, you don’t have a problem.

Booting your Mac in Safe Mode then simply restarting normally is one of the most overlooked, most effective procedures for solving a variety of issues after an incremental Mac OS X update, including performance problems. The reason for its efficacy: booting in Safe Mode forces a disk directory check, clears potentially problematic cache files and performs other routines, detailed here.

Download the Mac OS X 10.6.4 combo updater, which weighs in at a hefty 887MB.  Quit all open applications and run the installer.

Log in and/or startup items can exhibit compatibility issues with new Mac OS X releases, and therefore slow down startup times. Your best bet is to remove all of these types of items that come from third parties, then add them back individually or in groups to identify the problematic ones.

Login Items. Open System Preferences from Apple menu (upper-left corner of the screen) then click “Accounts.” Choose your current account from the left pane, then click the “Login Items” tab in the right pane. Deselect all items except those installed by Apple, such as “iTunes Helper” (you may need to click the lock box in the lower left of the screen to make changes). Save the changes, then restart and check for performance issues. 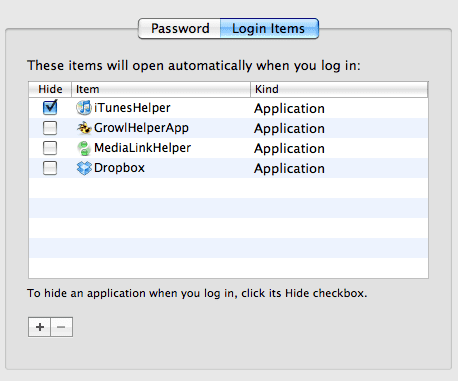 Startup Items. Look in root level of your startup drive (e.g. Macintosh HD). Navigate to Library/StartupItems. Remove all items to a safe location. Restart and check to see if  you still have slow startup.

You can also use Activity Monitor to check for processes that might be causing the slowdown.

A handful of users have reported Wi-Fi connectivity issues after the update to Mac OS X 10.6.4. These problems include inability to connect to wireless routers (such as AirPort base stations), slow transfer speeds, spotty connections, dropped connections and more.

Reset SMC. Some users have reported that resetting the Mac’s SMC (system management controller) at least temporarily resolves this issue.

Reset router settings. Try resetting your wireless router’s settings. For AirPort base stations, this can be accomplished using the AirPort Utility. For third-party routers, this can generally be accomplished by either holding down a button on the back of the unit (see your unit’s manual for details) or logging into your router’s configuration page by opening a browser window and entering the address 192.168.1.1 (you may need to enter the username: admin and password: password1) then using the reset function.

Change or turn off wireless security You may want to try toggling the settings on your wireless router, switching from WPA to WEP or vice versa, or, as a last resort, turning wireless security off altogether. For AirPort routers, this can be accomplished with the AirPort Admin Utility. For other routers, this can usually be accomplished by accessing the router’s configuration page — open a browser and enter the address 192.168.1.1.

Several users have reported an issue in which Spotlight refuses to work or causes a systemwide crash after the update to Mac OS X 10.6.4.

Remove corrupt dictionaries. In some cases, this issue can be solved by moving (to a safe location) all items out of /Library/Dictionaries–or moving in fresh dictionary files from a backup or alternate system–then restarting.

If this solves the problem, download the Mac OS X 10.6.4 combo update, which weighs in at a hefty 887MB.  Quit all open applications and run the installer.

Spotlight re-index. It appears that at least some instances of this issue can be attributed to problematic Spotlight indexing. Re-index your startup drive and any external USB drives by following these instructions:

If the above process doesn’t work to resolve your mouse/keyboard freezing issue, try downloading Hidden Files to view invisible files on your mounted drives. Delete the file .Spotlight-V100 from your startup drive and any connected USB drive then restart.

A number of users have reported an issue in which subjects are missing from messages in Mail.app after the update to Mac OS X 10.6.4.

This problem can generally be fixed via the following process: