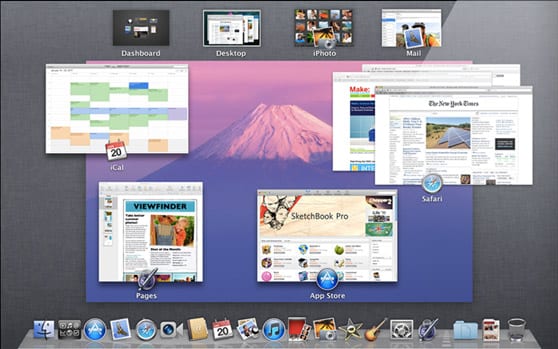 Apple has recently announced the next update to the OS X operating system— OS X lion. The ideas for this update come from Apples features on iPad. Even without knowing that these ideas were geared around iPad features, it is quite apparent just looking at the layout of the new features that they are iPad inspired.

The first thing to talk about is the update to the track pad gestures. All of the new features are integrated with the new gestures; instead of the gestures being in application based. They now seem to be working through out the OS seamlessly. These new gestures for those who learn them and use them will really speed up their navigation. One example is swipe to navigate. This allows you, for example, to swipe two fingers and move between tabs in Safari. Another example is very iPad-like. Tap to zoom works just like iPad, tap and it will zoom custom to the content on the screen where you clicked.

The first new feature for Lion Os is Launch Pad. It is a utility that makes your desktop work just like the iPad home screens. You can navigate through them page by page ordering them by how often you use them. You can put your applications into folders just like the folders on the iPad, and iPhone. When you click a folder, the little black bar containing the applications in that folder is exactly the same as the open folder for iPad. The new gesture for Launchpad is a five finger pinch. You can then scroll from page to page by two fingers swiping horizontally.

The next big feature is Mission Control. Mission Control is basically an update to spaces and expose integrated into one feature when used with full screen viewing(discussed later). The gesture to bring up expose is a three finger drag up. Mission Control shows you as Apple describes it as “a birds eye view” of what is happening on your computer. All of the open applications come up, and you see all of the individual windows grouped together by application. Once you click on one of the application groups those windows come to the center and forward, (the other application window thumbnails shrinking) you then can choose which one of those windows to pick, or click outside of them to go back to all of the open windows.

The other features that are included in this update that are not iPad based are equally as useful, and user-friendly. These updates are Resume, Auto Save, and Versions.

Resume saves everything that you are doing on your computer. If you shutdown, or restart your computer, Resume can bring back up everything that you were doing— everything saved and where you left it on the computer. Auto Save does exactly what the name suggests. You no longer need to manually save a document you are working on. (This feature only works for applications built of OS X Lion.) Also it saves the document in one place, but multiple copies called Versions. When you open a document back up after previously working and closing it, Auto Save will take you to where you were when you closed the document. Versions allow you to see the changes that you have made to a document. You can browse through them just as you do with the current Time Machine feature. They appear in a scrollable stack. There is also a lock feature that allows you to prevent unintended changes to be saved.