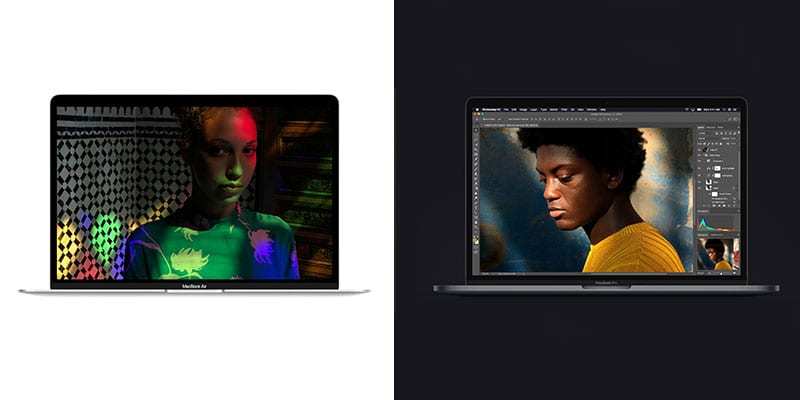 Buying a new MacBook is a big decision. It’s also a bit more difficult now that there are two neck-in-neck contenders for the best MacBook you can buy: the new 2019 MacBook Pro and the refreshed MacBook Air.

These are fairly different laptops aimed at different sections of the market. But if you find that you’re not sure what part of the market you’re in and you’re having trouble deciding between the devices, we’re here to help you out.

Below, we’ll compare some of the specifications and features of the new MacBook Air against the new 13-inch MacBook Pro. The real battle here is between the two entry-level, 13.3-inch models, but we’ll including the higher-end 13- and 15-inch model for comparison’s sake.

In a nutshell, the MacBook Pro is a more powerful machine. While the MacBook Air’s 8th-generation Core i5 chip is no slouch, it still doesn’t pack the punch of the 8th-generation quad-core Intel processors in the entry-level MacBook Pro. It’s also a low-power Y-series chip, which is another differentiating factor.

Of course, it’s worth noting that most people buy “too much” laptop. Unless you’re a video editor or you work with processor-intensive programs, the MacBook Air will be zippy enough for just about anything else you throw at it.

The higher-end MacBook Pro models are even more powerful than the entry-level MacBook Pro. The base tier 15-inch model sports a 2.6GHz 6-core 9th-generation Intel Core i7 processor and can be spec’d out to an 8-core processor. The higher-end 13-inch model has a 2.4GHz quad-core chip.

When it comes to other display specs, the MacBook Pro edges out the new MacBook Airs. The max brightness on the MacBook Pro is 500 nits, compared to the Air’s 300 nits. As of July 2019, all MacBook models feature True Tone technology. That wasn’t true before.

The MacBook Air, as you might expect, is slightly lighter than the smaller MacBook Pro — it’s 2.75 pounds versus 3.02 pounds. But, as far as the actual profile, both machines are going to be fairly slim.

If portability is a big factor, we recommend checking out both models in-person. It may surprise you how similar they are, which  pretty much negates the Air’s old advantage. Keep in mind that the MacBook Air is still slightly thinner, especially since it has a bit of a slant to its chassis.

The 15-inch MacBook Pro is, of course, larger and heavier than the two 13-inch models.

The 15-inch MacBook Pro has a larger battery, but still averages about the same in video playback.

The MacBook Pro has the Touch Bar, which features Touch ID baked right in. Of course, the Touch Bar is a love-it-or-hate-it feature — and even if you have it, you may find that it isn’t all that useful.

The MacBook Air, on the other hand, has a built-in fingerprint scanner for Touch ID. It does not have a Touch Bar, which may appeal to users who just aren’t fans of the OLED display strip taking away their function keys.

When it comes to ports, you’re only going to get Thunderbolt 3 ports on either the MacBook Air or the MacBook Pro. The only difference between the models is how many.

Without getting into the weeds too much here, it’s worth pointing out that the GPU on the MacBook Pro models are going to outperform the graphics chip on the MacBook Air.

The MacBook Air has an Intel UHD Graphics 617, compared to the Intel Iris Plus 645 or 655 of the 13-inch MacBook Pro or the AMD Radeon Pro 555X of the 15-inch model. If you need more graphical power, opt for the Pro models.

As always, check Apple’s Certified Refurbished site. There’s a good chance you’ll be able to find the model you want much cheaper than new.

For the vast majority of people, the 2019 MacBook Air is going to serve them very well. It’s thin, light and portable but still packs enough power for most school, work and entertainment tasks. In other words, it’s the best bet for most Mac users.

The entry-level MacBook Pro packs a bit more of punch as far as processor performance and graphics, but is slightly more expensive. It also a slightly brighter display and a Touch Bar. It’s well-suited for office and school, and could even fare well for some minor photo or video editing tasks.

The higher-end MacBook Pro models are going to be significantly more expensive. The cheapest 13-inch model starts at $1,799. But both higher-end MacBook Pro devices have their own set of benefits. They have four ports instead of two and feature better graphics and processors out of the gate. They’re well-suited for video editing tasks and other CPU-intensive workflows, particularly the 15-inch model.

A note about the keyboard

The 2019 MacBook Air and all current MacBook Pros models have the butterfly keyboard. Among Mac users, it’s one of the most contentious design decisions Apple has made in recent times.

Mostly, that’s because the keyboard has a habit of failing over time. Apple has released several iterations of the butterfly keyboard that help mitigate — but don’t solve — this problem.

In any case, every MacBook Pro is covered under Apple’s butterfly keyboard replacement program. If your keyboard starts failing, you should be able to get it replaced for free.

What about the non-Touch Bar model?

At the time of publication, Apple does not sell any MacBook Pro with a Touch Bar. The aging entry-level MacBook Pro has been refreshed with a better processor and a Touch Bar.

Despite that, the non-Touch Bar MacBook Pro is still available on the secondary market and on Apple’s refurbished site. You can probably find it at a fairly low price point, but we don’t recommend it.

For one, the non-Touch Bar MacBook Pro was released in 2017. That means that it sports an aging 7th-generation Intel Core processor. Compared to the 2019 MacBook Air, it’s a slightly faster chip (and the device itself has a brighter display). But people don’t need that extra bit of power for web browsing or routine productivity work.

Similarly, the non-Touch Bar MacBook Pro has an older butterfly keyboard without recent changes that make it more robust. According to anecdotal user reports, it’s more prone to failing than the current MacBook Pro keyboards.

Which MacBook are you thinking of buying? Apart from price, what is the one biggest feature that you will look for when it comes to buying a new Mac?