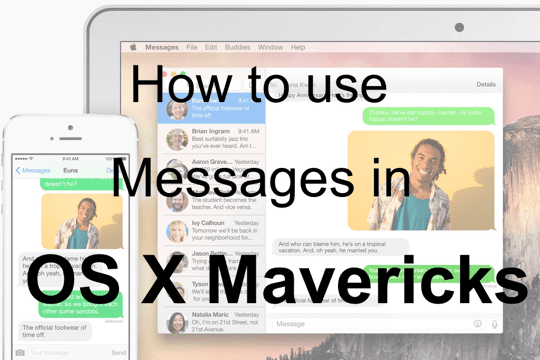 In OS X Yosemite, Apple has improved the Messages app by adding features that make it more similar to Messages on iOS devices. The basic functionality is still essentially the same, but you can now do things like start a screen sharing session and send a voice clip.

Messages has blossomed into a very usable messaging app, and in Yosemite it works much more seamlessly with other Apple devices such as an iPad, iPhone or iPod Touch.

We’ll assume that you’re already accustomed to the basics of using Messages, and that you are signed in with your Apple ID.

Some of the new features in Messages on Yosemite include:

Messages also has a new interface in keeping with the flatter look in Yosemite and the extensive use of transparency. It looks very attractive, and blends in well with the rest of the OS.

To use your Mac to send and receive SMS messages via an iPhone, check out our earlier article which describes how to use Continuity.

You can also share your screen as described here, so we will not cover those features here.

To start a group conversation, click the Compose new message button and then type the names of the people that you want to add.

When you’ve added several people to a group message, all participants’ messages are shown in the main message window:

One of the great new features in Messages is that you can send an audio clip, much like you would do in iOS 8. With a contact selected in the friends list, click the microphone icon (e.g. as shown in the previous screenshot at the lower right) then record a message.

Once you have finished recording just click the Stop button.

Next you’ll notice the Cancel and Send buttons, as below. Unfortunately, it’s not possible to preview the message like you can on iOS, and there’s no way to send video clips either.

The audio quality of the messages you record isn’t amazing, but bear in mind that it’s highly compressed using the AMR voice format, which is designed for voice transmission over low bandwidth mobile networks.

Once you have sent the message, the recipient should just be able to play it without leaving the Messages app. On an iPhone for example, if the receiver only has iOS 7 they will just see a .amr file attachment, that they can click to play in another app.

If you want to see the attachments and pictures that you’ve sent to any of your contacts, select the contact then click Details at the top right of the message window.

You will see a grid of previous photos and attachments for the entire message history:

If you want to delete an image for example, right-click any picture to bring up a menu which provides two opens: Open (to view in Preview) and Delete to send to the Trash.

You can also hold down the Command key to select multiple items:

Unlike iOS 8, message attachments cannot be automatically deleted after a specific time interval. Therefore, all the images that you’ve ever sent to a particular contact will be stored in Messages indefinitely, until you manually delete them.

Do Not Disturb mode

If you want some peace and quiet, there is a new Do Not Disturb mode which acts on a per-thread basis, so that you can just mute a particularly noisy conversation without having to turn on Do Not Disturb for everything on your Mac.

Do Not Disturb can be found in the Details section of any message, as shown below. Tick the checkbox below the contact’s name to enable it – notice the moon icon beside the person’s name in the side panel.

Although Do Not Disturb is definitely a great feature, unfortunately there’s no way to silence conversation threads for just a few hours; you need to remember to turn it off later. In future, it would be a welcome addition if you could choose a specific time period, much like offered by Facebook Messenger.

Messages in OS X Yosemite has become a useful and powerful app that can handle all your messaging needs with other iOS users, or indeed anyone else on a Mac.

With every new release of OS X, Messages is becoming more versatile and capable (such as the ability to send SMS messages), and we look forward to seeing that continue in the future.