You are here: Home / News / Meet your child’s new teacher: the iPhone

We all knew that it would come to this. Robots lecture in a monotone while they float in front of the blackboard. Implanted chips in our brains seamlessly download the complete works of Shakespeare. We all remember the Jetson’s, right?

Well, we aren’t all the way into the future yet, but there are certainly hints of alternate reality (AR) teaching machines in the near future. The children now in school have been called variously the Gamer Generation, Digital Natives and the ‘net Generation. No pressure, right?

A group of Spanish researchers wondered just how wired into technologies youngsters are and how learning differed between traditional teaching and electronic device educational games. In their study, “Evaluation of learning outcomes using an educational iPhone game vs. traditional game” in the May 2013 issue of Computers & Education,researchers developed a new iPhone game. The game was to teach children real curricula and the study tested it against a traditional game format teaching the same information. 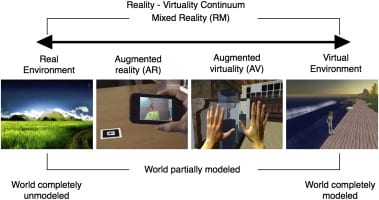 Spain is a particularly fertile ground to study mobile-based (M-based) learning. Under Spanish Education Law, play is considered to be a basic human need. Play can be used to teach concepts and information anytime and anywhere and has fun as the motivator. If the new paradigm performs as well as a teacher in class time, then the future of education planning may turn out to be very different from what we once envisioned.

Can M-based learning be considered a valuable educational resource? The researchers worked with 150 educational professionals at all levels to invent a traditional game and an iPhone game. The games were used to teach children multiculturalism, tolerance and solidarity — real information required to be learned by the students. The iPhone was chosen because of its Alternate Reality features, its ease of use and familiarity.

Students learned about the world’s three poorest continents, Africa, Asia, and Central and South America. The students were directed to collect food from those continents to distribute to poor people. They learned aspects of culture, indigenous animals, monuments and meteorological phenomena typical of the continents. The participants were taught respect for other people by helping them with different tasks.

The study involved 84 children from eight to 10 years of age who attended the summer school of the Technical University of Valencia (Spain). Two children played the developed minigame simultaneously on two separate devices, competing to find an element. Using their iPhones’ camera’s capabilities, the players explore the activity room to find the objects asked for by a guide character.

When one child found the element, he or she had to tell their partner. Ten different markers were distributed in the room. The iPhone game was unique in that the children playing each other competed and then collaborated in the same game. The children then played a traditional custom-guided game and learned the same concepts.

There was no statistical significance between the two learning methods, just as the study’s authors predicted. The students had about 70 percent correct answers in both game formats. Points for motivation go to the iPhone, with 96 percent saying they would like to play the iPhone game again and 90 percent liking the iPhone version better:

[quote] ….(T)he children have achieved similar knowledge improvements using an autonomous game (iPhone game) as using a custom and guided game (traditional game). This is an encouraging result because children can learn not only in the classroom, but also anywhere and any time without requiring full control over their learning process.[/quote]

As the study indicates, M-learning may have a robust future, providing a supplementary educational role. There will always be a place for the teacher in the classroom. But, by using new technologies for the usual drudgery of drills and review while the student has fun at the same time, the teacher can be set free to teach.