Micron Technology, The Boise, Idaho-based company provides a range of high-performance memory technology, including DRAM, NAND and NOR Flash. The company may be partnering up with Nanya technologies in Taiwan to produce NAND chips according to a latest report published in Nikkei Asia.

Consumers today can purchase iPhones with varying amounts of NAND flash memory, running from 32 to 256 gigabytes (GB). Reports in 2016 suggested that Samsung will be the key supplier of NAND chips to Apple starting in 2017.

A report in Barron identified some of the potential NAND suppliers for Apple in 2016.

“For iPhone 7, it was reported that Apple will likely use planar (2D) NAND in 32/128 GB models, 3D NAND in 256GB models. Main NAND suppliers likely to be SK Hynix (32GB), Toshiba/Sandisk (128GB) and Toshiba/Sandisk/Samsung (256GB). Apple will likely source controllers for the 256GB model from an external supplier as its Anobit controller is not compatible with 3D NAND.”

This could potentially change as Micron technology announces new partnerships and leverages synergies with Intel to spearhead 3D Manufacturing technologies for NAND chips.

This week Nikkei Asia reported that Micron and Nanya technology of Taiwan are expected to jointly make an investment of some 130 billion New Taiwan dollars ($4.11 billion) amid speculation that they will launch the production of NAND flash memory chips.

Currently, NAND memory chips are not produced in Taiwan. If Micron starts making them, this would be a first time for Taiwan to position itself in the NAND supply chain.

Increased demand for NAND chips have already caused prices to increase. There is also a shortage on the capacity side which has often constrained smartphone manufacturers like Apple. 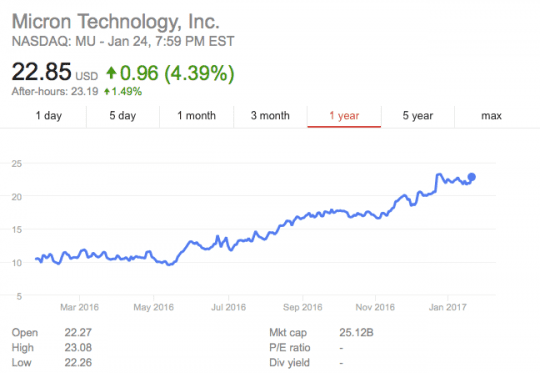 If Micron is able to increase new capacity lines via Taiwan, it could become a significant supplier for new Apple iPhones in the future. The company(MU) has also seen a surging stock price since the middle of 2016 and is currently trading at an all time high.