You are here: Home / iPhone / How the iPhone Continues to Make My Life Better 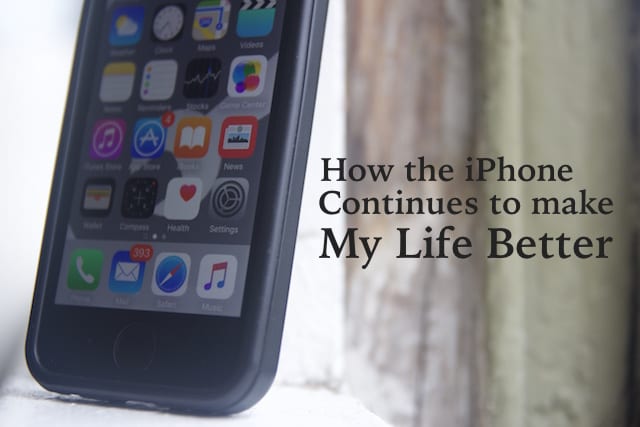 Apple always takes the opportunity to let us know what the company’s primary goal is, making their customers’ lives better. In so many ways that’s exactly what many of their products do. However, like with anything, it’s easy to take for granted how much better life is thanks to products like the iPhone. 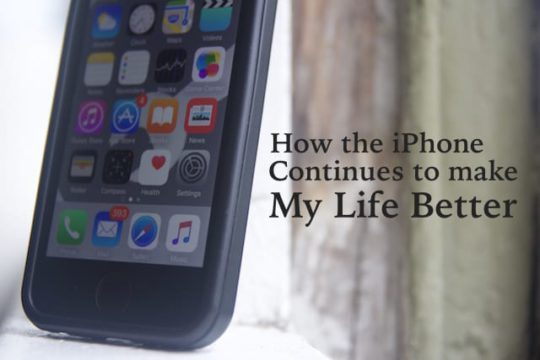 It’s helpful from time to time to sit back and reflect on how much life has changed over the past decade. I thought it would be a neat idea to dig into some of the ways the iPhone has changed my life for the better.

In many areas, I’m to the point where I can hardly remember what life was like before I had an iPhone. However, I do still have some memories from before Apple revolutionized mobile technology forever. For example, I’ll never forget my first cell phone, which weighed about the same as a bowling ball and wouldn’t fit into the BFG’s front pocket. But thankfully, times have changed for the better.

Navigation is an excellent example of an area that’s never been the same since the iPhone. I’m 28 years old, and it was barely over a decade ago when I started driving. By that time, stand alone GPS devices were already around, so I don’t have many memories of big foldable maps and printed out MapQuest directions. Instead, I’ve been using my iPhone for navigation ever since Google Maps was available.

In my opinion, this is what makes the iPhone the most successful product ever. That is it’s immense versatility. It’s only one product, but it can used for hundreds if not thousands of different things. The iPhone has also replaced tons of other products, like the stand alone GPS devices. You don’t see many of those these days, because the iPhone has become a much better GPS device than the stand alone products.

For the longest time, I used Google Maps. However, I’ve always been drawn to using Apple’s built-in apps when I can, mostly for simplicities sake. So, when Apple Maps was released, I quickly gave it a shot. Unlike many horror stories I heard throughout the first year Apple Maps was released, my experience has been good. There were few, if any times I can remember getting wrong directions or ending up lost while I was using the app.

The caveat, however is that many times Apple’s built-in apps can be too simple. While the Maps app has been no exception, iOS 10 may breath new life into Apple’s Maps app in the form of third party app integrations. Only time will tell whether it catches on, but it certainly has potential. 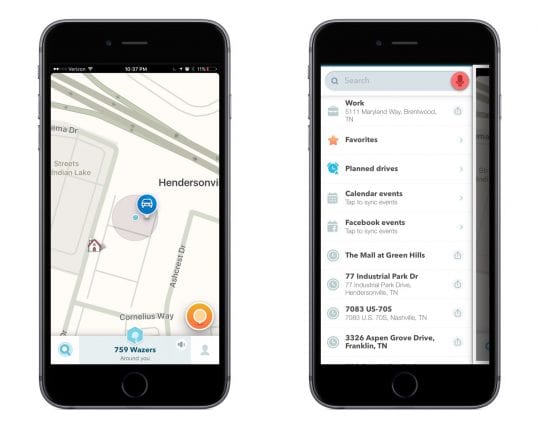 For the time being, however, I will be sticking with Waze, which is easily the best navigation app available in my opinion. Waze is unique because it uses real time data from the millions of other users to provide updated information. Alternative routes are easy to check, and the app will even provide alerts for cars on the side of the road and objects in the road.

I have been recommending Waze to almost everyone I know lately, so if you haven’t given it a shot, you’re missing out.

I’m sure there are plenty of people who still prefer to carry around a notebook or a sheet of paper to jot down tasks. There is certainly nothing wrong with that, but I’ve found the extra functionality that comes with digital task management is worth making the switch.

Again, managing my day is another thing that was much more difficult a decade ago. I used to be the type who carried around a notebook to keep up with what I had going on. The problem is I kept losing my notebooks, they were always a bit bigger than I preferred and I could never settle on the best system for long hand task management. And yes, I tried tiny little pocket sized notebooks too, but they were just too burdensome to write in. 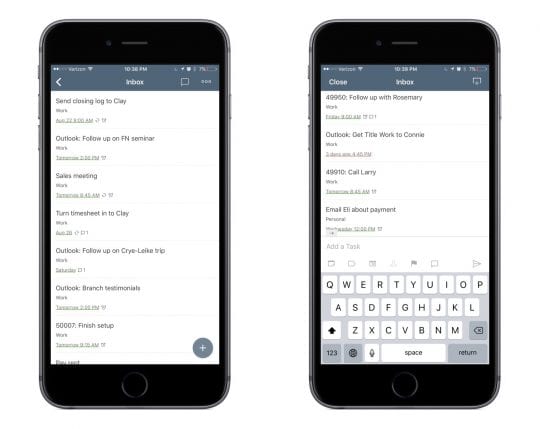 Enter the iPhone. It’s a device I always have on me, and the ease and benefits of managing tasks digitally has made it a no brainer to use as my task management tool. On the software side, I have settled on Todoist as my task management app of choice. Apple’s native Reminders app is capable of serving the needs of many iPhone users, but Todoist is loaded with additional features.

For me, the first major benefit of Todoist is its availability cross platform. Many unfortunate souls, like myself, are stuck using a PC during their day job, so applications which are available cross platform are appealing. I use Todoist both at work and in my personal life to manage all my different tasks.

Todoist prides itself on being available everywhere and on every platform. For example, there is a native Windows application and even an Outlook plugin, which I use for work. Rather than rely on a complicated folder hierarchy approach to email management, I can simply add emails as tasks. The other applications are a nice supplement to using Todoist on my iPhone.

Managing money is another area where technology has really made my life simpler. Personally, I’m glad I don’t live in the day of manually balancing checkbooks and carrying a wallet around full of cash. 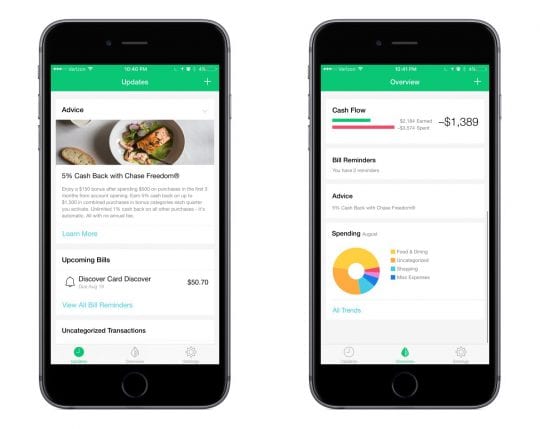 Instead, I use Intuit’s excellent free personal finance management system called Mint. My debit card is hooked up to my account, so every time I use it, the transaction is automatically added. Mint is a web based application which also has a fantastic native app for your iPhone. If you have ever looked into personal financial management apps, I’m sure you’ve already heard of Mint.

The budgeting feature is probably my favorite thing about the software. As I mentioned, transactions are automatically added, and overtime you can train the app to place certain transactions into specific budgets. That way you can stay up to date on your spending habits in near real time.

The iPhone is essentially the evolution of Apple’s iPod. At its heart, it is a media consumption device. While millions of users still primarily consume music on their iPhone, I personally gravitate towards Podcasts. That’s not to say I don’t listen to my share of music. I have been a happy Apple Music subscriber for some time, but I mostly listen to podcast.

Before the iPhone, Podcasts weren’t really a thing. But now, the ability to have thousands of hours of entertainment and knowledge in my pocket is mind blowing when you think about it. When I really sit back and think about it, I’ve probably listened to Podcasts on my iPhones over the years more than I’ve done any other activity. So I don’t hesitate to say the iPhone has really changed my life in this area as well. 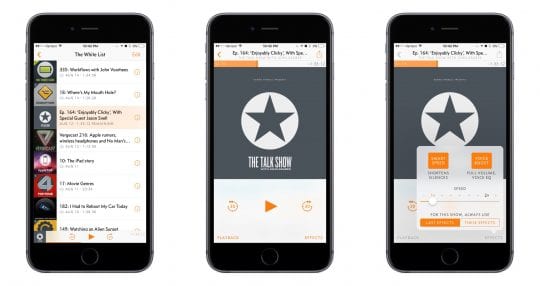 Currently, I’m using Overcast as my podcast player. The primary reason is an impressive feature called Smart Speed. When activated, Smart Speed eliminates dead noise between people talking. The result is hours of saved time when listening to podcast all while retaining the same voice speed. If you’ve ever tried to listen to a Podcast at 1.5x speed, you know how annoying it can be. Instead, when listening to a Podcast using Smart Speed, it still sounds normal. You just don’t get all the pauses and dead space during playback.

I hope this gives you a look into how the iPhone has made my life better in so many ways. It is a good exercise to take a step back think about the things that make life better so that we don’t take those things for granite. I realize that at the end of the day, an iPhone isn’t all that important. It is just a hunk of metal after all, but it certainly helps us enrich the areas of our lives which are important, and I think that’s what makes it such a special product.

Let us know in the comments if you liked this style of article and we will certainly do more.