Arm yourself with maps you can use even when you have no signal with the new map app for the iPhone and iPod Touch called ForeverMap Europe. This app was developed by Skobbler GmbH and can be downloaded in the App Store. It is compatible with the iPhone, iPod touch and iPad; it also requires iOS 3.1 or later.

The Google Maps app is great but it doesn’t store maps on your device. When you look up a new spot, it has to go online – but what if you are in a signal black spot or abroad, or have a Wi-Fi only iPad touch or iPad? This app is great for these situations when you are lost in a new place without a map. ForeverMap Europe takes a bludgeon on this problem by parking 1.3 GB of pan-continental maps on your device, so that you’ve always got a guide available right in your fingertips. 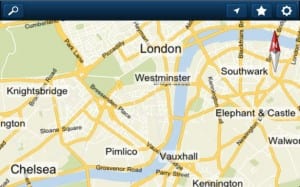 The maps come from the user-generated OpenStreeMap (OSM) project, which bounces between having good times and bad times dealing with Google’s information. According to the designers of this app, a current version of ForeverMap 2.0 includes features such as offline search, location finder, route calculation and information on places of interest.

This is wonderful in providing users with a fully interactive, offline map solution that can be used anywhere, anytime and without limitations. ForeverMap 2.0 also includes extensive Wikipedia references such as history and information about landmarks, significant buildings and much more, which essentially converts the app into an intuitive electronic tour guide.

Sadly, the app’s interface could do with improvement since the app can become quite frustrating at times because of the confusing user interface. The user interface can also be a bit more friendlier for users to allow easy navigation throughout the app. Route planning, for example, requires you to find a location, tap, hold and then pick ‘Directions to/from here’ rather than just having ‘to’ and ‘from’ fields. You also can’t alter the route, although we’re told this will change.

Another down side to this app is that it eats up quite a bit of memory since it has a 1.3 GB download size and roughly 2.2 GB install size. So, users with a lot of applications on their device might find it slowing down the processing, which has been clearly acknowledged by the app’s developers.

Some users have reported that they are unsatisfied with this product because it is far too basic. One user, for instance, stated that: “Very simple maps with important missing items (like airports for instance). You might be able to search an address, as it suggests, but only if it actually exists on the map… (A friend’s address, where he’s lived for 10 years – a proper address with an English post code, not the middle of nowhere) isn’t found because the street doesn’t exist on the (supposedly) updated map. ”

However, all in all, this is one of the most comprehensive Europe map apps available in the App Store today. If you are planning a trip, the ForeverMap Europe app is definitely an app to have in your iPhone or iPod Touch.