You are here: Home / News / How does Samsung’s AR Emoji stack up to Animoji?

Unless you have been living under a rock for the last couple of days, you should know by now that the Samsung Galaxy S9 lineup has been unveiled. Aside from being a solid upgrade from the Galaxy S8, the Galaxy S9 takes Apple head-on in more ways than one, but the most notable has been AR Emoji.

What is AR Emoji?

The move to integrate AR Emoji into Samsung’s already feature-packed device marks another attempt to mimic Apple in some form or fashion. Animoji was introduced alongside the iPhone X and allows users to create cute personalized messages.

These messages are created with the help of Apple’s depth sensor technology. This the Animoji to mimic all of your face and head movements. Which means that you can brighten a loved ones day with a lovely poop emoji. Or you can opt for a more family friendly ‘unicorn’.

With AR Emoji, Samsung is essential allowing users to create a personalized emoji, that is supposed to look just like them. Samsung takes this one step further, making it possible for users to customize their emoji in every facet. Customization options include adding glasses, hairstyle, clothes, and more.

This has an eery feeling to Bitmoji which has become quite popular, especially for those who live the Snapchat life. Bitmoji, for reference, allows you to customize a little emoji in its own right but allows the user to customize all aspects, including the general build, of the emoji.

After the AR Emoji has been created via the camera application on, the Galaxy S9 will then create 18 different stickers, which act as animated GIFs. From there, you can quickly send these to your friends in either GIF form, or just a basic PNG.

While Animoji does not feature the sheer number of customization options as AR Emoji, Apple’s fun messaging option is a bit more polished. In my brief time with the Galaxy S9, I created an AR Emoji of myself and was left feeling a bit awkward.

I can see how the Samsung fans out there will call this a great feature and it will be a focal point of many commercials over the year. But, the end result of the AR Emoji looked more creepy than it looked any fun.

Apple “limits” users to a select choice of characters, each more fun than the last. Best of all, the face tracking technology works much more smoothly than what is offered by Samsung’s rendition. Animoji accurately tracks how I move my head and what emotions are being shown on my face.

Another nice feature offered by Animoji is the fact that it can be properly shared with all of my friends, regardless of which operating system is being used. I’ve sent quite a few Animoji already, and I have never seen or heard a complaint about it looking awkward, even for my Android-using friends.

Final Verdict: Animoji by a mile

The Galaxy S9 is not even available to purchase anywhere, so AR Emoji could be tweaked through software updates. The issue is that Samsung has a notoriously terrible history of not providing timely, or reliable, software updates. 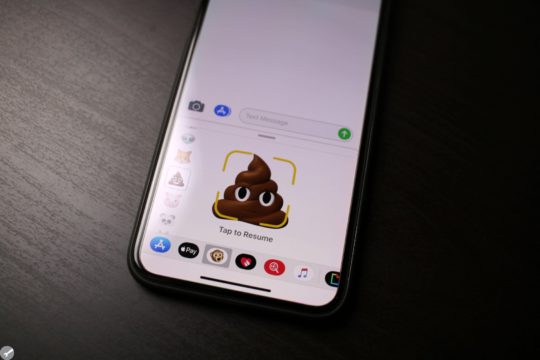 On the other side of the pillow, Apple has had time to fine-tune Animoji, and is preparing to release yet another character with iOS 11.3. Animoji takes the crown for “fun personalized gifs” and it’s not even close. AR Emoji feels like just another gimmick being offered, and one that will likely fizzle out over time.

Of course, there’s a chance that Apple eventually releases a similar feature, making it possible for users to create a mini Animoji of themselves. That’s a logical timeline to expect, but maybe Apple has something else up its sleeves to continue showing why it’s an industry leader.