You are here: Home / News / Security Breach after Jailbreaking iPhone with Pangu 9.3.3 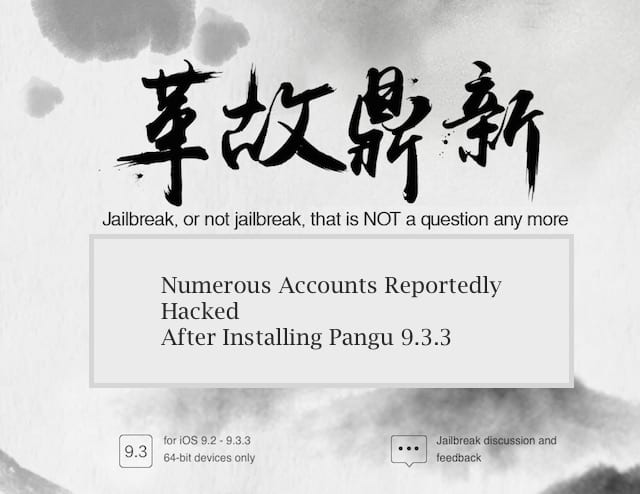 Recently, the jailbreak version of iOS 9.3.3 was released by Pangu, a Chinese company that specializes in providing software to jailbreak your iPhone. This morning, we learnt that there has been a tonne of security issues with folks that installed the jail break software on their iPhone.

On the the reddit forum, Jailbreak , numerous users reported that their paypal accounts and other financial accounts got hacked and monies were missing.

Most of these users used pangu’s official website to download the jailbreak following their official announcement on Twitter this week. The software was well received by the community of folks that prefer to use the jailbreaking software instead of the Apple’s official iOS updates. 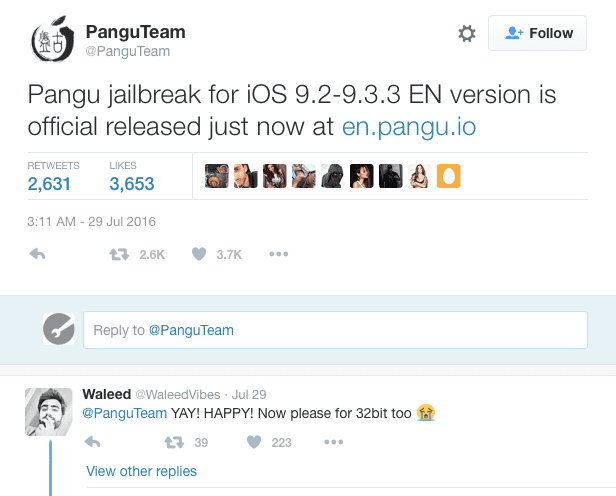 Here are some sample comments from the users that have experienced this problem and reported on reddit yesterday.

/u/t0mbanks Clarifaction: While the IP address they listed is from Seoul, it is a confirmed proxy IP address. Waiting for him to reply.

/u/Kolokythas also had his paypal account accessed from someone in Beijing after jailbreaking. No prior history of account breaches

/u/vany365 had to cancel his CC after $600 unknown charges. Happened after jailbreaking. No prior history of breaches

/u/manuman888 paypal account was also accessed after jailbreaking. **more info from u/manuman888 :I jailbroke Sunday morning on the 24th and my account was accessed on the 27th and today as well. They moved money from my bank account to my balance and didn’t do anything the next time (assuming it’s the same person).

/u/dwyyyyyyanewade PayPal account also had an access from China. Facebook was accessed by safari from China a few minutes ago. PP app on PC, the pp store was installed. Now deleted.

/u/maxshah912 Fraudulent charges via Paypal after jailbreaking. Had PP store, jailbroke via PC

Please spread the word and think twice before downloading a jailbreak software onto your iPhone. If you are going to still pursue jail breaking by using Pangu 9.3.3, we suggest that you wait till these security issues are addressed by the company. For those of you that have already downloaded the software, please check your settings and account information and if necessary change the passwords et al.