You are here: Home / Reviews / Technology, Grandparents and an Apple

Right here in India where I live, the summer vacations have just started. With holiday mood in full swing and the fact that my grandparents were coming over to our place, I couldn’t help but be very excited.

My grandparents arrived, and we exchanged niceties. My parents, grandparents and my sis all sat down on the sofa and started talking.

After some time the conversation turned to technology. And the topic (obviously) reached on me spending too much time on gadgets. As I argued and tried convincing them all about all the beneficial uses of gadgets, support trickled in from an unexpected source.

Whipping out his iPhones (yes he has two) he declares that gadgets are not the devil in disguise. He talks about messaging and photography and iTunes and all fancy features of the iPhone as I sit flabbergasted.

He has Facebook, Twitter and Instagram (while I have none of these) and the entire extravaganza that any teen dreams of. My paternal grandad, ’Jeje’ on the other hand isn’t amused.

He is waiting on Apple to release the dual SIM feature so that he doesn’t need to carry two devices with him.

While my maternal grandad whom I call ‘Aja’ owns an iPhone 8 and an iPhone X, my ‘Jeje’ owns a Nokia he bought nine years ago which has a dial keypad. He finds it incredibly difficult to use, and the phone is always wrapped in layers of old plastic which ensures that the device remains scratch and dust free. (Very important for people of his generation!). 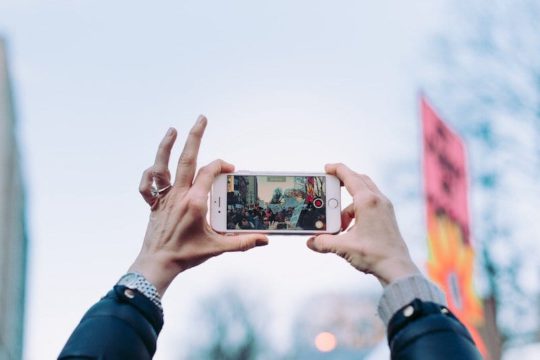 IP67 or 677, it doesn’t matter, folks like my Jeje are going to make sure that gadgets live dust free in their plastic bubbles.

While my tech-savvy Aja is an exceptional exception, my Jeje is the complete stereotypical Indian grandad. He gets muddled up with gadgets. The only chips he knows are Lays, a mouse is a rodent, and a screen is a curtain.

Words like ping, lol, dm, and Snapchat are the equivalent of gibberish to him. Okay maybe that’s a little exaggeration, but he’s definitely the least tech-savvy user in our family. Technology has always been a mystery to him.

In fact, it’s fair to say that most Indian grandparents are like him. Both my grandmothers and the grandparents of my friends are all in the same boat. They all grew up in a time without technology, and they prefer it to stay that way.

As time pushes ahead, they resist only accepting technology when the walls they build against it, cave in.

As international barriers melt away and most of their children move abroad, the seniors of the society accept the basics like Skype, Facetime, and Whatsapp but that’s about it.

In India, it’s very common for children to move out of India to seek jobs and settle abroad. These children gift gadgets to their parents hoping to drive them out of their shell.

An example would be my own family. We lived in the UK before, and from my other uncles and aunts, two live in the US. Every two years when any of us visit India, we all bring gadgets for our parents. And it’s the same case in most of the families. The newest tech gadgets in the market inevitably reach all their parents in India.

For every single time, the process goes something like all of our new year resolutions.

DAY 2-But if I remove the packaging, it’ll get dirty and scratched.  What’s the point if I spend so much money and it gets scratched? Better keep it unopened and on display for some time.

DAY 36– Sonal( my nickname), how do you message? How do you facetime?

DAY 37-How do I see messages? What are these yellow faces used for Sonal? Make me a Gmail account. How do I open my Gmail account?

DAY 38– Check your messages I sent you an emoji. I posted a GIF to you. I’m facing timing you, check your phone.

Day 39 – Mr. Jena do you know this messaging feature?. Technology is evolving. You should learn to keep up with times no. Look at this iPhone.

DAY 42– I don’t want to overuse it. They didn’t build Rome in a day. I’ll take a break and put it back safely for some time.

DAY 300– Device still kept safely under a blanket of dust and a spider web lock. Preserved carefully in its packaging at the corner of the cupboard.

Tech- awareness state back to DAY 1…

How many times have us youngsters consulted our parents and grandparents with tutorials on operating tech? A bajillion! All our grandparents are very enthusiastic but what really stops them from using gadgets comfortably? FEAR.

What are they scared of though? Simple things, really. What if it breaks?  And if it gets a black screen of death? What if I mess it up?

Our grandparents treat gadgets like diamonds- not to be used but to be admired.

My ‘Jeje’ wraps his phone in layers of plastic, hides it under a blanket so its invisible to potential thieves ( Yes this is real!), washes his hand before using his touch screen and takes utmost care( read overprotection ) of his devices. Compare that to us, who drop our phones, spill water on it, scratch it, and overuse it till its breaking point.

What Apple can do

Jokes aside, but what can gadgets especially iPhones do for their older customers? Amongst all gadgets, iPhones and iPads are a favorite for older people as they’re super friendly and easy to use.

After all these months of helping my grandparents and parents, I think that the areas where Apple could potentially make things easier are as follows:

Helping grandparents learn the basics of technology can be frustrating, hilarious, and funny all at once. But with little tweaks, changes, and effort by Apple, everything could be changed. Grandparents could get over their technological fear and Apple could gain a whole new audience.

Ayesha SinghDeo is a Ninth Grader out of Bangalore India. She has lived in the US, UK and now resides in India with her family. She loves art, reading, and technology and wants to grow up to become a top Neurologist.

As a part of promoting global young voices of Apple users, AppleToolBox is helping young Apple fans by showcasing their stories, ideas, and art.