As we close out the year, it’s time to once again bring you the cream of the crop. In this post are some of my favorite apps that I’ve downloaded over the last month.

Some are just for fun, while others are apps I think you’ll end up using every day. As usual, I’ve worked to pick apps that you probably haven’t heard of before. There is a mix of prices, from free to under $5, so there’s something for everyone.

The best iOS apps of December 2020

Starting things off is an app that should probably come pre-installed on every iPhone – Mineswifter. As described, I truly believe that Mineswifter is the perfect Minesweeper app.

First, it’s free and contains no ads. Already off to a great start. Second, it gives minesweeper an iOS design update that feels perfectly natural with the rest of your phone. Apple could’ve published this app and I wouldn’t have been surprised.

Third, the app has an algorithm that prevents 50/50 minesweeper boards. Have you ever been playing minesweeper, gotten near the end, and ended up having to choose between two tiles, with no indication of which is a mine? That will never happen in Mineswifter – it’s pure strategy.

Fourth, and most importantly, it’s fun. Very fun. You can play classic minesweeper, track your stats, participate in daily challenges, and more. It has extremely satisfying haptic feedback.

It even comes with an evil twin app, Evil Mineswifter, that only contains puzzles with 50/50 decisions. So try that out if you’re feeling lucky.

GoodSudoku: Sudoku for the modern age 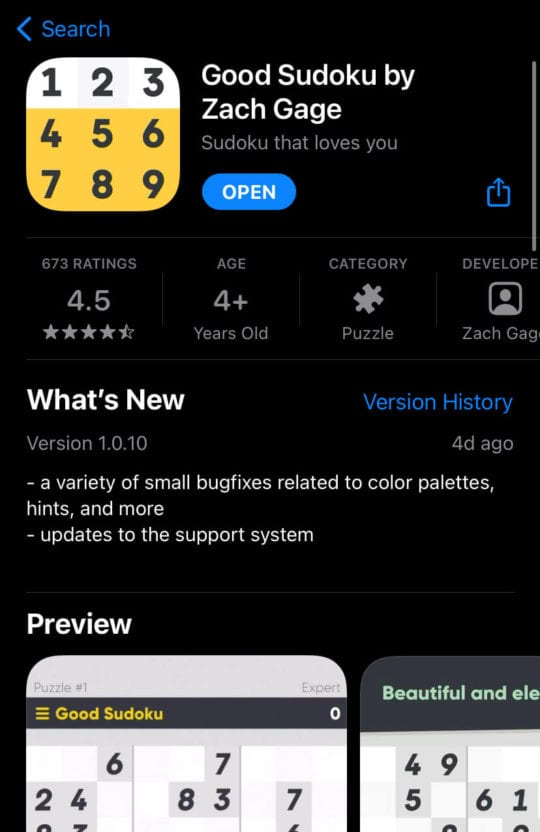 Another old school gaming app that I’ve embarrassedly sunk tens (if not hundreds) of hours into lately has been GoodSudoku. Like Mineswifter, this is another modern take on an old favorite.

However, it has far more features, additions, and tweaks than Mineswifter that make it a much more compelling download. It’s hard to explain everything that’s been added to this app, but I’ll do my best.

Essentially, the developers have created a “new” version of sudoku with tons of new elements and features without breaking the core game. For instance, you can set the game to automatically fill in possible numbers for every square at the start of each game.

At first glance, that might seem like it makes the game too easy, and it does – if you’re playing on the easiest setting. What it’s actually doing, though, is eliminating a menial part of sudoku so that you can focus on learning more advanced strategies and tackling harder puzzles.

There are tons of features like this that help push you to the hardest difficulty puzzles on the app. Along the way, the app teaches real sudoku strategies so that you gradually become a sudoku pro. I used to spend twenty minutes on the intermediate puzzles and now average under five minutes on the pro puzzles.

If you like passing the time with sudoku, you have to try this out. It’ll ruin pen and paper for you.

FlickType: A keyboard for your Apple Watch

I became a first-time Apple Watch owner when Apple released the Apple Watch SE a few months ago (you can read my review here). One of the first things I found myself unhappy with after daily use was the lack of a keyboard.

Using your finger to write out words is ok for short messages, and dictation is convenient in some circumstances. But for the most part, I find myself pulling my phone out of my pocket to type out a response, which kind of defeats the point of having a small iPhone strapped to my wrist.

Enter FlickType. FlickType is a full keyboard (emojis, numbers, and punctuation included) for your Apple Watch. You can type letter by letter or swipe your finger to quickly type out a message. If the keyboard detects the wrong word (which, admittedly, happens often) just scroll the crown to select the word you meant.

It’s not a perfect app – it only works with Messages, so you can’t use it to write responses for anything else. However, I’ve found myself reaching for my phone far less often, which always feels good. It’s a cheap app that you’ll use all the time – check it out! 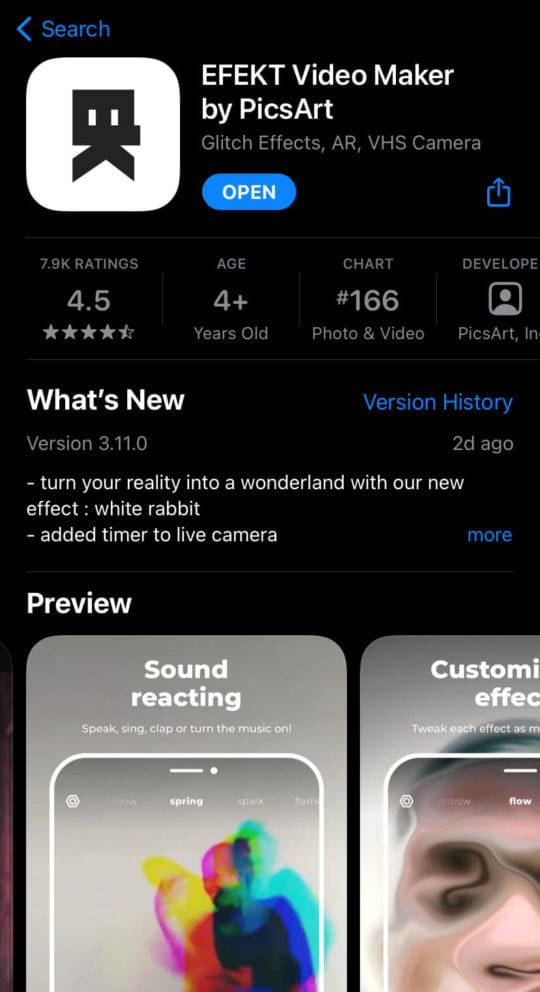 As someone who isn’t on any social media, I typically don’t care for photo filters in the slightest. They’re fun to use around friends, but I never sit around at home thinking, “Time to make funny faces!”

Well, that’s changed. EFEKT is an app that applies real-time filters to your videos and photos. Unlike Snapchat and TikTok, however, these filters are mesmerizing. I think you have to pay $20/year to save any photos or videos – but honestly, I don’t mind.

The app is so fun to swipe through and point around your house that it kind of doesn’t matter. Seriously. It’s hard to describe how cool the filters are, you’ll just have to check it out for yourself. Give it a download, plop on the couch, and enjoy.

The best macOS apps of December 2020

HazeOver: Easier on your eyes and your brain

HazeOver was designed to address the lack of contrast that the flattened design of macOS Big Sur has brought about it. While I haven’t had a problem with Big Sur’s contrast, I do think this app is a really smart way to tweak windows on Mac. 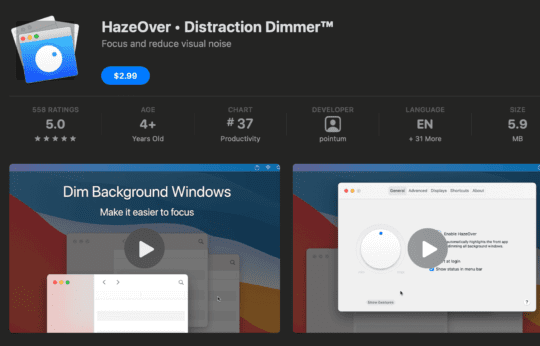 This app creates a full-screen shadow behind whatever app you’re actively using. That means that if you have three windows open on your desktop, the one you click will darken the others as well as your background, making it much more clear which app you’re working in.

It simplifies your workflow and makes your screen much less harsh on your eyes. HazeOver also has features specifically for working at night and even has options for multiple displays. Give it a look if you want an easier time working on your Mac.

Aside from Messages and Mail, I don’t get very many notifications on my Mac. One that I get daily, however, is, “Eject disk before disconnecting or turning it off.”

Without fail, at least once I day, I either accidentally or unwittingly unplug my Time Machine drive from my MacBook without first ejecting it. Not only is this notification annoying, but this is dangerous to your drive. It’s how files get corrupted and data is lost.

Fortunately, someone smarter than I has come up with a solution.

Ejectify is a Mac app that automatically ejects all of your drives when your Mac goes to sleep. So if you return to your desk and unplug a drive or rearrange some cables, you won’t accidentally unplug something important or in the process of moving files. You can modify the settings to eject upon screensavers as well, giving you added flexibility.

If you’re as absent-minded as I am, this will save you a headache or two.

Silicon Info: Always know which architecture an app is using

I recently wrote a post on how to tell whether a macOS app is using an Intel or ARM architecture. If you want to know more about what that means, you can briefly skim that post to get an idea.

In that post, I show M1 Mac owners how to go into an app’s information and deduce which architecture it’s currently optimized for. However, this process is a bit tedious, especially if you need to check this information frequently.

Luckily, the fast and passionate developers from Mac have already come up with a shortcut. The aptly-named Silicon Info is an app that tells you which architecture an app is using from the Menu Bar. This allows you to check this info at a glance at any time. Simple, clean, efficient – what’s not to love?

Calculeta: A Mac calculator for your Menu Bar

Last but not least is an app that I have been dying for. As a writer, I am constantly needing to add things up. Word counts, article totals, invoice amounts, rates, expenses – the list goes on.

But since Mac doesn’t have a calculator widget anymore (why, Apple, why?!) I’ve resorted to leaving the Calculator app open on my desktop at all times. It’s annoying to switch windows to add things up constantly, and I don’t like having my desktop cluttered with it. 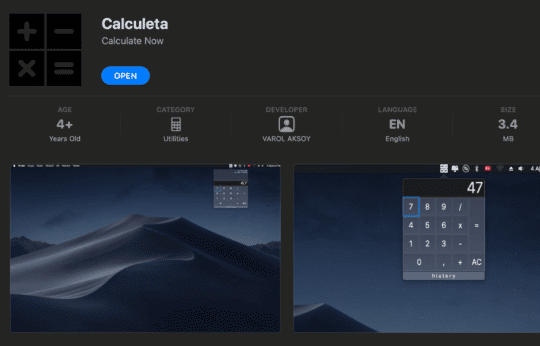 Well, I don’t have to do that anymore! Calculeta is a $0.99 app that gives you a calculator in the Menu Bar. Need I say more? It’s convenient, cheap, and something that you’ll use all day long.

My Menu Bar is getting too cluttered with these great apps! And yet, my appetite for new apps remains insatiable. I guess that means I’ll be seeing you again in January.

Thanks for reading, and Happy Holidays!