Hello and welcome back to another edition of the best iOS apps and best macOS apps list. This is my June curation, and it was an interesting one! Apple’s WWDC21 event seemed to overshadow a lot of the app releases this month.

That said, I was still able to find plenty of options that I’m happy to share with you.

If this is your first time visiting my monthly series, don’t worry! It’s pretty straightforward. Essentially, I spend the month collecting apps that I feel deserve attention. Then, I share them with you!

These apps are what I would consider more obscure. That way, you can come to this list every month and find something you haven’t come across before. I also try to include apps that are recent indie releases to bring attention to new creators. And, of course, I try to include apps that I have used to provide a certain level of quality and usefulness assurance.

This month is no exception to these rules! I think these are apps that you guys are going to love, especially the macOS apps in this post. Without further ado, let’s get into it!

First on our list of the best iOS apps of June, we have Denim. Denim is an iPhone app that allows you to quickly and easily create cover art for your playlists. 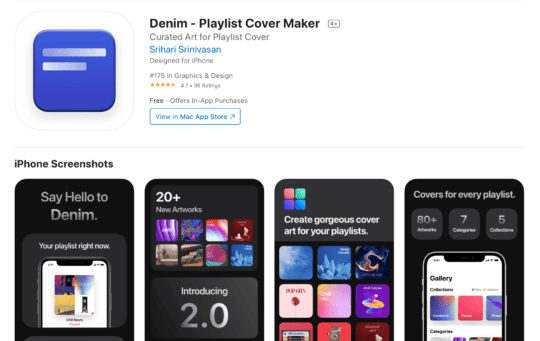 It helps you do this with a three-step process. First, you pick the playlist you want to add a cover to. Then, you create the cover using artwork, gradients, and other Denim tools. And finally, you save the cover and upload it to that playlist.

I’m the kind of person who is constantly creating, sharing, and modifying playlists. I enjoy it so much that I’ve built up a decent following on some of my playlists. Denim is a great way to add personality to your playlists and make them more shareable and exciting for followers.

The one thing to keep in mind with this app is that you will need to pay to add designs beyond the free options. There are free designs, but there are a lot of paid designs, too. If you don’t mind paying for artwork, though, then that isn’t much of a problem!

2. Meddify: All the reminders you need to never miss your next dosage

Next on this month’s best iOS apps is Meddify. Meddify is a reminder app for those who need to routinely take medication. You add the medications you take and set reminders for when you need to take them. After that, Meddify will start automatically reminding you whenever you need to take your medications. 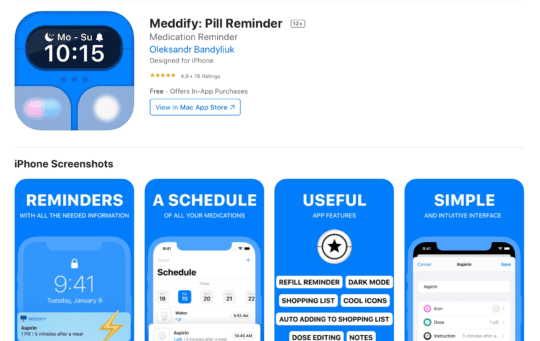 But that isn’t all Meddify does for you. You can also modify your dosages, remind yourself to request a refill, automatically add refills to your shopping list, personalize your notification icons and sounds, and more.

If you’ve just been using the default Reminders app on iOS to keep track of your medications, Meddify is a serious improvement. And if you’ve never used an app to remember your dosages, then this can be a real life-changer. I recommend it!

The basic reminder features of Meddify are free. Though you will need to pay for premium features like personalization and refill reminders. The app is super private, though, which is crucial given the sensitive nature of the app.

The third item on this month’s list of the best iOS apps is Odio. Odio is an app that helps you create and listen to spatial audio soundscapes.

For those that don’t know, spatial audio is a type of sound engineering that makes it sound like the audio you’re listening to exists in a three-dimensional space. This is more varied and robust than typical stereo audio, which only has two directions – left and right.

Spatial audio came to Apple Music recently, if you want to read more about it here.

Odio has a beautiful and unique interface that allows you to easily and carefully craft ambient, spatial sounds. It’s perfect for falling asleep, focusing on work, meditating, or coming back to a calm state. Not only can you create spatial soundscapes for yourself on Odio, but you can share and use soundscapes, too.

One reviewer of this app put it well, “It’s wrong to call this an app. It’s really more of an experience.”

4. k Notes in camera: A strong start for a creative app

Last up is an app that I think has a lot of potential. I found this app on a Reddit thread from an eager indie developer. They got some feedback in the comments on their post, and within a day had already updated the app accordingly.

This developer is earnest, has a solid idea, and deserves some support on this app and their future projects! 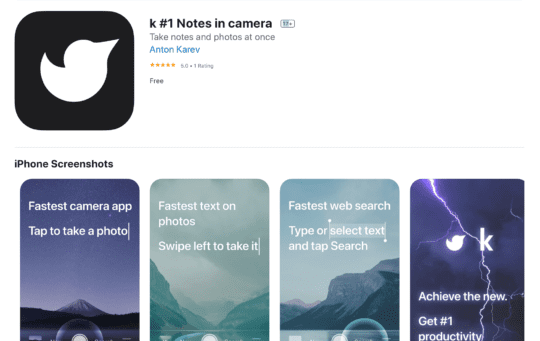 It’s very similar to Snapchat’s photo editor but distinct enough to be useful in its own right. You can add a recipe to a picture of food, save the name of a restaurant with the photo of your meal, remember the name of an opening act, or just add some creativity to your journal entries. k Notes also makes it easy to search the text you’re typing by swiping to the right.

After using this app for a few days, I do have some additional feedback! I think the tutorial for the app could be a bit more clear, and I would like the option to be able to reposition text on the screen. For now, the text just starts at the top left and moves down the screen. In the age of Snapchat and Instagram, it would be nice to be able to slide and zoom text wherever you want.

Other than that, I think it’s a great start and a super creative idea!

That’s the end of my best iOS apps suggestions for June. Now to the best macOS apps of this month.

Keyboard Maestro is probably the most robust app I’ve ever suggested on this series. I really can’t explain to you how deep this app goes. It will make you the lord of your Mac.

However, in my experience, neither Automator nor Shortcuts come anywhere close to Keyboard Maestro in capability or ease of use. I have found that Apple’s solutions tend to be simple.

They only automate basic things like turning on your lights or switching between Dark Mode and Light Mode. If you want more advanced automations, you’ll need to know how to write code. And for me, that kind of defeats the point of apps like Shortcuts and Automator.

Keyboard Maestro has no such limitations. It is like having a better version of Zapier on your Mac. For instance, something I have always wanted to automate on my Mac is my invoicing. I’d like to just finish writing an article, have it automatically added to an invoice, and then have that invoice automatically send at the end of the week.

While that would be possible with Zapier, Automator doesn’t come anywhere near that level of usefulness.

I managed to put this together in a few minutes by dragging and dropping some options around in Keyboard Maestro.

If you like automation, you’ll drool over this app. It’s a dream. A costly dream ($36), but a dream nonetheless.

The second of our best macOS apps is another automation-centric app, though with a more niche focus.

Hazel is an app that allows you to manage your Mac folders with rules. You set rules for specific folders, file types, origins, and more, and Hazel will act on those rules for you.

It’s kind of like using rules to manage your inbox in the macOS Mail app. Easy to use and a great timesaver.

My one complaint with this app is the price. It’s $42. Now, I’m generally not someone who cares when developers charge money. They need to make a living, too, and I think we’re all a little spoiled from free, ad-riddled apps on iPhone.

That said, $42 is pretty steep for an app with a very simple, singular purpose. I would expect something like this to be priced closer to $15. But if that price doesn’t sound unreasonable to you, I think this is a great app to have on your Mac!

Swish is certainly one of the best macOS apps I’ve found in a bit, though I have some mixed feelings about it. More on that in a second.

Swish claims to be the “missing gesture layer for macOS”. By that, Swish means that it takes much greater advantage of your trackpad than your Mac does by default.

This makes a lot of sense when you consider it. The trackpad on Mac is second to none and a key part of what makes the macOS experience feel so slick and polished.

However, Apple only has a few core gestures built into the trackpad. Swish gives you abundantly more options for gestures on Mac.

This includes things like being able to swipe windows to minimize them, snap them to the various positions on your screen, moving apps between secondary monitors with a swipe, and a lot more.

Perhaps the biggest feature Swish brings to the table is a double-gesture. You can start swiping or pinching in one direction, pause, and then start again in another direction. Swish will read this as two different moves and perform actions accordingly. Kind of like having hotkeys for gestures.

While I found this app to be ingenious in concept (and I think lots of you will love it) I did have a hard time with it. The gestures on macOS feel so intuitive and natural that trying to expand and extrapolate on them quickly became confusing.

I had a hard time remembering half of the gestures that come with Swish and couldn’t seem to get the hang of other gestures. The result was that, after the novelty wore off, I found myself ignoring this app.

It doesn’t add anything to macOS that you can’t already do, it just makes existing actions swipeable. That isn’t for me, but it might be for you!

4. DockMate: A visual update for your Mac’s Dock

Last up on our list of the best macOS app for June 2021 is DockMate. DockMate is a pretty straightforward app. After you install it and give it permissions, it’ll start showing you thumbnails of your currently running apps in the Dock. 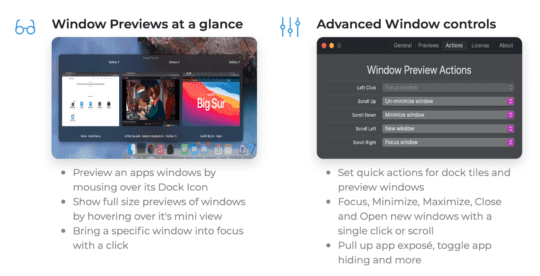 For example, if Safari is running but you’re using Pages, you can hover over Safari’s icon in the Dock and a thumbnail will appear, showing Safari in real-time. If you’re playing a YouTube video in the background, you’ll see it playing in the thumbnail. It won’t be a static image.

DockMate also has special thumbnails for certain apps. Fantastical, for example, shows you your upcoming events for that day. And the Music app gives you a Now Playing tile with controls.

My one complaint with this app is that it felt a little unreliable for me. But I also have an older, underpowered Mac, so my RAM may just be maxed out at this point. I also get lag in apps like Messages and Finder semi-regularly. So don’t let that keep you from trying DockMate out!

That’s it for the best iOS apps and the best macOS apps for June! Be sure to come back next month for more great apps from all across the web.

If you missed last month’s set of app recommendations, you can check it out here.

For more reviews, news, and insights into all things Apple, subscribe to the AppleToolBox blog.