Welcome back to another round of the best iOS apps and the best macOS apps! This is the March 2022 edition of our ongoing series, in which we round up the best apps from around the web.

As always, you’ll find a variety of apps within this post! Usually, I attempt to stick to lesser-known apps. This month, though, I came across a few more popular apps that I had to share, just in case you (like me) hadn’t yet heard of them. These apps are a mix of free, cheap, and expensive, so there’s a bit of something for everyone.

Also, this post (like all others in this series) is not sponsored in any way. I do not get any kickback from you downloading and using any of the apps in this post. All of the opinions expressed are my own unfiltered thoughts (for better or worse).

Alright, with that out of the way, let’s get into this month’s best apps! 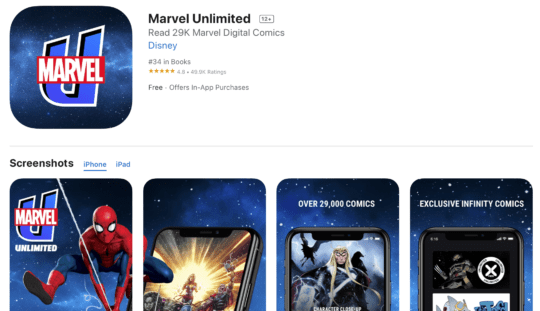 For those that don’t know, Marvel Unlimited is a streaming app for comic books. You can read as many comics as you want from nearly Marvel’s entire history. Any character, story, or world you want to dive into can be found in this app.

The only thing you won’t find in this app is newer comics, as in comics less than a year old. Marvel generally waits a few months to a year to add comics to this piece, so if you want to read the most current Marvel comics, you will need to buy the physical or digital copies.

But that shouldn’t stop you from getting into this app, especially if you’re new to comics. I had a great time exploring the lore of my favorite characters and developing my taste in comics. Since it’s only $10/month for a subscription, you can really dive in with little risk. This gives you the freedom to explore without feeling like you’re breaking the bank (which it can feel like at times when at the comic shop).

So if you’re someone who is interested in comics but doesn’t know where to start, check this app out! The comics that helped me find my footing were anything Deadpool, Gwenpool, The Visions (a bit dark and adult!), and most Daredevil comics. Find a character or art style you like and start reading!

Do you know how video games always have those little mini-games you can play? They’re a lot of fun but just there to add polish to the bigger game?

Well, with Skill Zone, mini-games are all you get. It’s a collection of addicting, bite-sized games. You play them all to climb the leaderboards and get the highest scores. It’s like a tiny arcade for your phone. 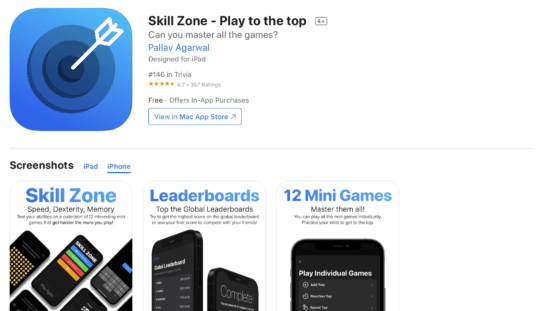 What I love about this game is how straightforward it is. There is no complicated gold collecting schemes or pay-to-play models. You just practice these simple games until you get better and better.

These games include memory tiles, trivia, finding an emoji, and more. If you’re looking for something simple and addicting to add to your iPhone, give this app a peek!

3. MonthDay: Date and time complications for your Apple Watch

Alright, this one is technically an Apple Watch app – so sue me! This one solves a small frustration that only other Apple Watch users are going to understand.

You know how you find the perfect Apple Watch face in the Watch app on your iPhone, you spend a few minutes setting it up, choosing the colors, and setting the complications in place, only to realize at the end that you won’t be able to see the date or digital time? 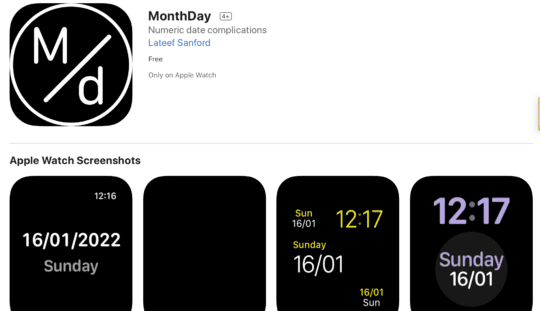 It’s super annoying! How many watch faces have I thought about using only to find that it only has an analog time or you can’t check which day of the week it is. So I end up using a watch face I don’t like as much just because it has the information I need.

Well, MonthDay solves this problem. It provides you with customizable complications that you can use with any watch face on your Apple Watch. So no matter which face you choose, you’ll always be able to easily check the time and date. I’m not sure why this feature isn’t built-in, but hey, at least someone fixed the issue!

This app is totally free and collects no data on you, so what’s not to love? Check it out!

That brings us to the last of this month’s best iOS apps, Just Timers. This one is exactly what it sounds like: It’s just timers! This is another one of those apps that solves a small frustration on your iPhone for good.

That frustration is not being able to set more than one timer at a time. I can’t fathom how it’s 2022 and Apple still hasn’t added the ability to add more than one timer on your iPhone. And I know this technology exists because you can set multiple timers on HomePod and Apple Watch. So what’s the deal??? 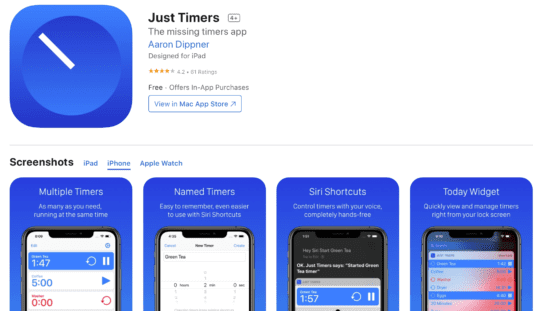 Anyway, downloading Just Timers will give you access to as many timers as you want. You can label them, too, making it easy to keep track of whatever you’re timing.

This app is especially potent when paired with the Shortcuts app. I wrote an article covering the best apps to use with Shortcuts, and this one made the cut! So be sure to give that post a look and see how you can combine this app with Shortcuts to get even more power from it.

I’ve been working on an article for a few weeks now where I test Triple-A games on an M1 Mac to see how powerful the CPU is. And while doing so, I’ve encountered a problem that I’d always heard about, but never truly knew how bad it was:

There are hardly any games that run on Mac. Seriously, 90% of what I’ve decided to test are Windows-exclusive games. Even the biggest titles are only available on Windows.

That’s what led me to the first of this month’s best macOS apps, CrossOver. CrossOver is an app that allows you to run Windows apps on your Mac. You don’t need to pay for a Windows license or do anything overly technical. Just find the apps you want, download their Windows counterparts, and open these counterparts in CrossOver.

It’s a super simple (albeit pricey) tool, and it’s not just for gamers. You can use this app to access productivity apps and other Windows-exclusive programs. Though I will say CrossOver is primarily used for gaming.

CrossOver is $60, which is a lot to be sure. You need to be sure that you’re going to use it, otherwise, the price is going to be too much. So if you’re someone who likes to game and wants to give games a go on your Mac, try the free trial for CrossOver and see what you think!

A more robust, technical, and expensive alternative to CrossOver is Parallels Desktop. This app allows you to run Windows in a window on your Mac. You will need to buy a Windows license, and you’ll have to pay an annual fee to use Parallels, too. So this app can add up quite a bit. 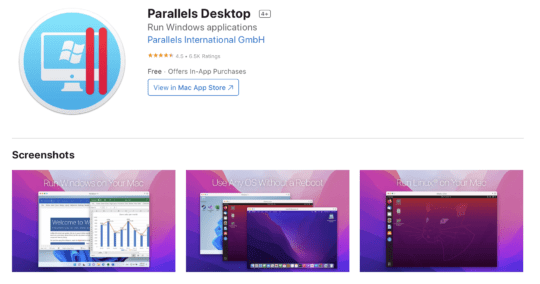 That said, it’s in many ways better than CrossOver. You get a true Windows environment within your Mac without needing Boot Camp. This allows you to do way more than just play games (though you can do this, too). You can write code, test programs, and essentially do everything else you would normally do on a computer.

It’s a virtual environment, so it’s not exactly reinventing the wheel. But what Parallels does do is provide you with one of the best VMs there is for Windows on Mac. If this is something you’re looking for and you haven’t been satisfied by other solutions, then it’s likely worth giving Parallels a shot. Just know that you’re going to end up paying a hefty fee to put this app to use!

3. Pagico: An advanced planner for your Mac

As someone who works from home and has to manage clients, projects, and assignments, keeping track of all of my tasks can be a time-consuming hassle. And if something is missed, well, that’s bad.

For that reason, I’ve always loved using apps like Pagico. It’s one of the best macOS apps, providing an experience that’s a cross between a calendar, physical planner, and spreadsheet. 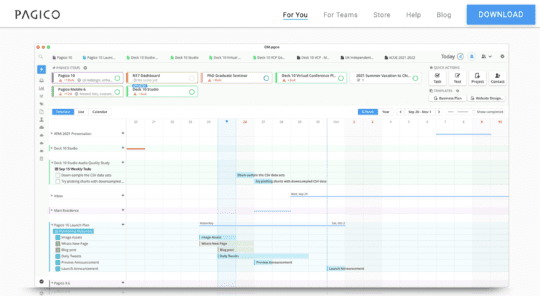 In this app, you can create tasks and projects to help you keep track of your work, what’s due and when, and who/where/why assignments are for.

The one knock I’ll put against this app is that it requires an account. I know this is for synchronization across devices, but it’s always a little lame when you have to create an account to use a utility app. It’s also $50, but there’s a 15-day free trial. So you’ll have plenty of time to decide if it’s right for you before you break out your wallet.

It’s something of an ongoing gag in this series that I have crammed my Menu Bar with apps. Some of them aren’t even functional – they just show a cute animation of a cat sleeping. Just right now I have 17 Menu Bar apps running, and some of those are only there to help me keep my Menu Bar organized.

So it’s a little shocking that I’ve never mentioned Bartender before! Bartender is by far one of the best macOS apps. It’s an organizational tool for your Menu Bar first and foremost. It hides Menu Bar apps until you’re ready to see them, expands your Menu Bar with an extra row, and allows you to control the spacing between apps in the Menu Bar.

But that’s the boring stuff. You can also search for Menu Bar items with a Spotlight-esque search feature and create triggers so that certain icons only appear at certain times. For instance, you can hide your battery level until it drops below 50%.

The current version of Bartender is just $15, which I think is a decent steal. You can also try this app for free for four weeks, which is plenty of time to decide if you love it. Check it out!

And that’s it! Those are the best iOS apps and the best macOS apps for March 2022. Again, these aren’t as “indie” as I usually go for, but I still feel they’re essential apps worth mentioning. If I was pressed to choose my favorites, I’d have to go with Marvel Unlimited, MonthDay, and Bartender.