You are here: Home / iPad / The Best iPad Drag and Drop Apps on iOS 11

The release of iOS 9 was a major step towards the iPad becoming a platform of its own. It was the first time the iPad received major features separate from the iPhone. However, it still left many iPad users wanting more. One of the glaring omissions was the ability to drag and drop data across apps. With the introduction of multitasking, iOS split view, and the iPad Dock, the feature made perfect sense. It’s been a long wait, but iOS 11 finally delivers. 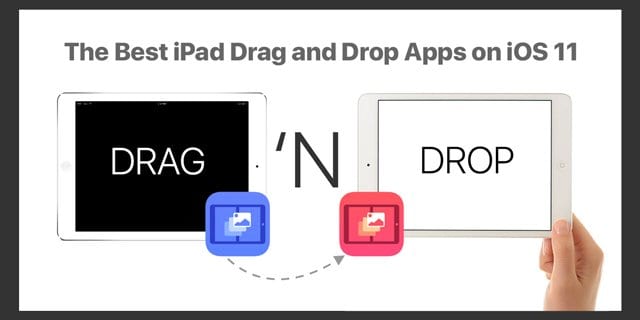 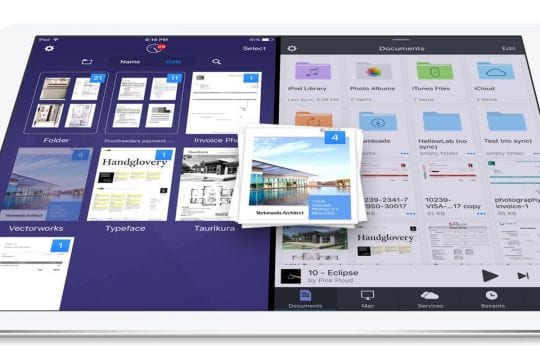 The Best iPad Drag and Drop Apps on iOS 11: Apple’s Own Apps

The Files app is arguably the highlight of iOS 11 and is really the hub for drag and drop. A good argument can be made that one doesn’t make sense without the other. The implementation is great. Drag and drop works just like you would expect. Just touch a file for a second and it will pop out enabling you to drag it to another app. It’s also just as easy to drag files into the app.

Safari is full of drag and drop possibilities. Images, text selections, and URLs can all be selected and you can drag them to other apps. You can also drag URLs from other apps into the address bar to visit a link, which is a nice touch.

Apple has placed a whole lot of attention on the Notes app over the past few years, and it continues to show. The power of drag and drop really shines in Notes. Many common tasks like adding images or copying text to a note are quicker than ever.

Mail is another app that benefits from drag and drop in a big way. In the past, Mail has been severely limited when dealing with multiple attachments. Just trying to add a few files to a new email has caused me multiple headaches. Drag and drop make dealing with attachments in Mail a breeze.

Using drag and drop, it is finally simple to add multiple files to a new message. Once you’ve highlighted a file for dragging, just tap on other files with your free hand to add them to the pile. You can then drop them directly into a message. You can also drag an entire email into another app to create a link back to the email. This can be especially helpful for creating email reminders.

Apple’s vibrant developer community is usually quick to adopt new features and drag and drop is no different. There are already plenty of third-party apps that support the feature, but these are some of the best. 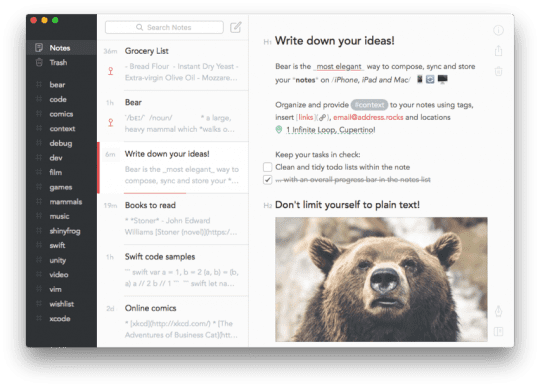 Bear is easily one of the best note-taking apps for the iPad, especially if you write in markdown. Similar to Apple’s Notes app, you can drag images, text, and files directly into the app. However, Bear does a poor job handling direct links to web pages, an area where Notes excels. Dragging files into the app is also hit or miss. The app crashed on me a few times when adding a PDF to a note.

For pure writing and note taking, Bear is the best app with drag and drop support available.

There is no shortage of third-party email clients for the iPad. I’ve tried a majority of them but continue to come back to Airmail. The drag and drop support is similar to the default Mail app with one exception. In some apps, dropping a message will create a PDF rather than a link back to the email. In my usage, dragging a message into the Notes app created a PDF while dragging a message into Bear created a link back to the message. Attachments are also handled very well in Airmail. Attaching multiple files to a message is finally easy. 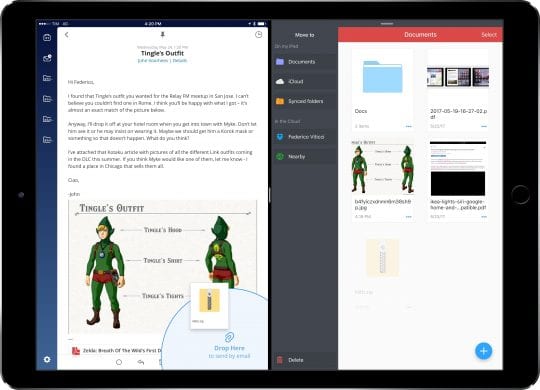 PDF Expert is one of the best PDF apps on the App Store. It also has some neat tricks up its sleeves. It can serve as a document provider in the files app, which is a great place to locally store PDF files you may be reading through and annotating.

Readdle, the developer of PDF Expert, implemented drag and drop support between some of their own apps before Apple ever announced the feature. It makes sense their apps would be early out of the gate supporting the feature system-wide.

The implementation of drag and drop is straightforward and similar to the Files app. But if your work requires any amount of time with PDFs, PDF Expert is a no-brainer.

Clipboard managers are more power user-focused, but if you are in that camp Copied is the best out there. With drag and drop, anything you have stored in your clipboard history can be quickly moved into another app. This clipboard sharing includes text, images, links and so on.

Todoist is one of most popular task management apps for iOS and drag and drop makes it even better. You can drag text messages, URLs, emails, images, PDFs, files, and more into Todoist.

Todoist has implemented drag and drop in a smart way. To create a new task you can drop items onto either the Quick Add button, project, label or filter view. If you drop an item into the comment screen, a new comment is created and pre-filled with the information. Getting different results depending on where you drop an item within the app feels like the way drag and drop should work. Hopefully, many other apps will follow suit and support similar implementation.

Figuring out what types of files can be moved in and out of apps is a bit of a learning process. But once you get a feel for it, you can be more productive working on the iPad than ever before.