You are here: Home / iPhone / Top 5 Features that Apple Missed in iPhone 7

Now that the event is over and the passions are settling down a bit, it is time to take a step back and evaluate the Features that Apple Missed in iPhone 7  and  iPhone 7 plus models. 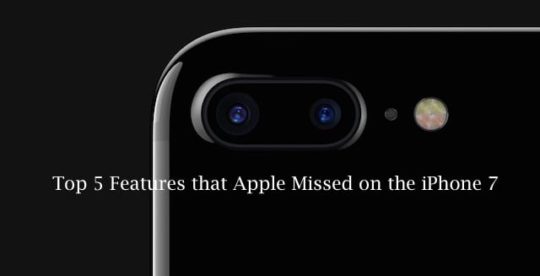 Is it really that cutting edge, super innovative Smartphone that changes the game in town?

I love my iPhone but I had hoped for more. I’m sure I’m not the only one that is of this opinion. Yesterday, the social media was full of mixed reviews. Here is one from Tom Warren that caught my eye. 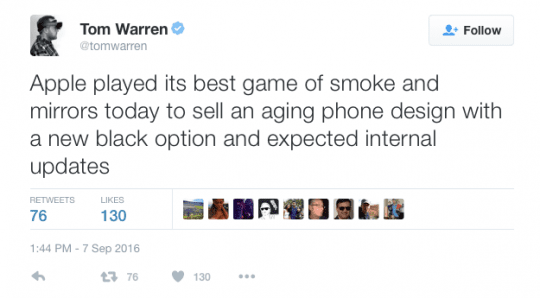 Here are my Top 5 Features that Apple forgot to talk about / add/ or catch-up to when it comes to innovation on the new iPhone 7.

It is possible that Apple is genuinely not interested in this burgeoning field of technology. Apple has flirted with jumping into the Augmented Reality bandwagon for a while now with no deliberate resolve.

During the last earnings call, it was Tim Cook who said

“It also does show that AR can be really great. We have been and continue to invest a lot in this. We are high on AR for the long run, we think there’s great things for customers and a great commercial opportunity. The number one thing is to make sure our products work well with other developers’ kind of products like Pokemon, that’s why you see so many iPhones in the wild chasing Pokemons.”

Heather Bellini of Goldman Sachs Research expects virtual and augmented reality to become an $80 billion market by 2025. Mobile VR has already taken off in the last two years. As an Apple Fan, it pains me to see the ads of Samsung Gear VR instead of Apple products in this space.

Is it really that difficult for Apple’s innovation team to meet the market demand when it comes to mobile Virtual and Augmented Reality?

Much like how Apple missed out on the Social Media phenomena and its attractive economics, it risks doing the same if Mobile VR/AR continue to sustain their growing momentum and Apple does not take a stance.

Wireless Charging and Other Features that Apple Missed in iPhone 7

Now, there weren’t too many wows or claps or a standing ovation when Apple showcased it’s wireless $159 Airpods at yesterday’s event. The reviews from the critics have been mixed with suggestions that one could very easily loose or misplace these Airpods.

I think that Apple’s engineering chops came together and showcased itself with the introduction of the new wireless earplugs. Engineering the new W1 chip from scratch and nicely stitching the software component with a simple “Connect’ feature is beautiful.

When you can do this, one wonders, why is it so difficult to throw in the wireless charging for the iPhone. It’s 2016 already!

We can have Wireless earpods but we can’t have wireless charging!

Is it really that difficult or costly to engineer a solution?

Inductive charging is not new and has been around for a while now.

You can pick up a wireless charging kit for your iPhone 6 for less than $30 from Walmart or Amazon today.

When the platform for the product is to make customers lives simpler with technology, why can’t we have wireless charging in this day and age in our new iPhones.

Apple is a pioneer when it comes to mobile security on smartphones. One of the main reasons I have always liked iOS over Android is because of its security features.

When Samsung announced the iris-scanning feature on its new flagship phone model, I must admit that I was not a happy camper.

Why couldn’t the iPhone be the first phone to introduce this novel security technology, especially when Apple patents around this feature have been talked about for years now?

The first to market stance says a lot about a brand that stands for innovation. Perhaps this was a missed opportuity with the iPhone 7.

On one hand, Apple wants to court the emerging markets particularly in India and China and on the other hand it fails to recognize this unique customer need of the local geographies.

What am I missing here?

It is no surprise that most people in India use dual SIM on their phones. The rationale is that they want to keep their work lives and personal lives separate.

Instead of carrying two phones around, these users can easily switch the SIM Cards and avail themselves the benefit of keeping their digital lives partitioned.

Upgrade Cycles in developed markets are growing. What used to be a common 24 month upgrade cycle for a smart phone is now increasing to 28 months and beyond in some cases.

When you are faced with market saturation in your developed market, you are bound to innovate features for the new and emerging markets.

With the iPhone 7, Apple introduced a new NFC chip feature that will allow Japanese users to use Apple Pay. Japan is the most profitable region for Apple today and it is no surprise that Apple wants to grow in this market.

In the case of India and other Asian markets, would it be too much to ask to engineer an iPhone with dual SIM capabilities? Maybe the iPhone SE can be modified to meet this local need so that Apple can establish a commanding presence in this market.

Samsung clearly understands this local need along with other Chinese smart phone brands.

Think Global and Act local Strategy has proven itself in the case of numerous multinationals that have managed to sustain their momentum in emerging markets.

At the heart of it, Apple is probably first and foremost a design firm. Anybody can buy a computer kit and assemble a PC in their garage over a weekend.

When you buy an Apple Mac, you are buying an experience. Similarly when people bought the new iPhone 5 with the sharp design, they were excited about it. In spite of the dual camera system and the changes to the home button on the iPhone 7 plus, I don’t feel the excitement with the new design.

Granted the new iPhone 7 is thinner than the Samsung Galaxy Note 7 (.28 inch vs .31 inch) and is available in the new black finish, but it fails to generate that joi-de-vivre that we all accustomed to when opening up a new iPhone.

A super sharp curved AMOLED screen would have been a nice catch-up move when it came to design aesthetics for the iPhone 7 plus. A curved screen with new user interface on the edges of the screen would have even been ore promising. After all, Apple has been thinking about this for a while in forms of patent filings.

As an avid Apple fan, I’m really impressed with the new A10 processor design and the energy efficiency features of the new iPhone 7 hardware. You can’t beat the graphics improvements that have been added to the new iPhone 7 models. I’m also pleased to see that the new iPhone is finally ip67 standard device. This is an area where Apple finally caught up to Samsung’s waterproof smartphones.

I also think that the new iOS 10 is going to be the key strategic advantage that Apple will benefit from over its competitors when it comes to selling this new iPhone in the coming months.

There is however an inflection point where technical updates surrounding aspects such as camera features become discernible to only technophiles and engineers but not to the general public. So we are still looking for quite a few features that Apple missed in iPhone 7 models.

We can only hope that the tenth anniversary of iPhones next year will motivate Apple to showcase a radical iPhone that will again be talked about for years.

Until then, as an Apple Fan, I stay hungry and foolish.