You are here: Home / Reviews / Top VR Apps for Your iPhone

Inspired by Samsung’s latest hype about virtual reality on Android smartphones? What if we say that you could have the exact same experience on your iPhone, and that too without spending a ton of money.

In this article we will be bringing the VR experience straight to your iPhone with the help of one inexpensive headset coupled with some amazing, cool VR apps. 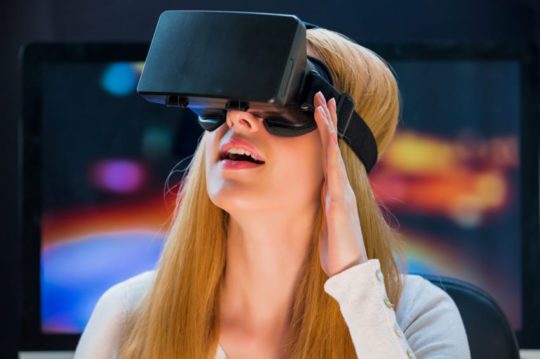 To be honest, Google steals the show when we talk about VR in the smartphone arena – the reason being, well it’s hard to find a competitor. It seems like Apple isn’t planning to go virtual in near future either. BUT, that doesn’t mean you have to start thinking about buying an Android phone. The virtual world is equally exciting for iPhone users as well. To get started, all you need to have is a VR headset (which is pretty inexpensive) and a suite of cools apps listed here.

Getting your VR headset for your iPhone is not that big a task as it may sound like. Google Cardboard has made life easier for all the VR enthusiast. To do things really cheaply just visit Unofficial Cardboard website and order your headset.

Now let’s quickly get down to the apps, which could help you explore any part of the world or even take you on a trip to moon – the possibilities with VR are endless.

Want to visit Sydney? An exotic place in Bahamas? Or simply want to discover your hometown in virtual reality? Google Street View app is your perfect companion.

The best thing about this app is that it is not based on Google’s mapping efforts but users’ as well. This means that you can create your own set of 3-d photos and keep them saved as your collection.

This application covers everything … from sports to movies and music to travel, Jaunt VT is one of the top VR apps for iPhone. The app is all about a huge collection of 3-d videos in the world of virtual reality. Navigation is easy, you just have to look at the option and buttons and that’s it.

If you are letting your kids have the fun of VR then don’t forget “The Invasion” – an animated short clip, designed to give you the best VR experience.

New York Times, eponymous app is one of the best VR app out there. The app is home to some breathtaking cinematic experience, which includes a virtual visit to Pluto, climb to top of World Trade Center, and a documentary for kids.

The truth is, we might not be able set our feet on moon ever. For enthusiasts this might be a real bad news. Virtual Reality however is surely taking thing forward. An app called “Virtual Reality Moon” is currently the best thing for moon and space lovers.

With the help of this app (and with a handful of ads) you can be transported to the surface of the moon within no time. Once on moon, you can easily see the Earth and the International Space Station. Depending upon the type of the headset, you can also roam around and look here and there. The visuals are so real that we are sure you might want to try this again and again!

You may say that this app is a mix of NYT VR and Jaunt. It contains all the best content of both the apps. Vrse is mainly focused on VR cinema. From the list of videos available, you can either select to stream online or download.

Now, how can YouTube stay behind when it comes to VR videos? The Internet giant is home to ever increasing collection of 360-degrees and VR videos.

Try searching YouTube with “VR” or “360” in the end of anything you’re trying to search. YouTube also has a dedicated channel for VR videos called “360 Channel”.

Other than that, any video on YouTube can be watched in VR but the result won’t be phenomenal every time. Keep in mind that the technology is still developing and in times to come we are sure that some amazing advancements will be made.

At AppleToolBox, we are hoping that Apple steps up its game in the area of Virtual Reality. They had started selling the view master VR headsets in February. We checked their store today and couldn’t find a single VR based offering online. Either Apple is thinking through VR in a very different approach or it is in the camp “Ah..This too will pass”. No matter what, the Apple iPhone is a powerful device and you can use it to experience 360 videos and VR using some of the apps and a basic headset.