You are here: Home / News / Trump vs Apple: Why The Donald Doesn’t Stand A Chance

If Apple were a country, it would be the 55th richest country in the world. This fact means that any feud between President Trump and Apple would rival a major international clash. As a presidential candidate and now as president, Trump has pitted himself against the tech giant on several issues: user privacy, overseas manufacturing, and hiring of foreign workers. Trump even called for a boycott of Apple in early 2016. Conversely, Tim Cook threatened a lawsuit against Trump’s travel ban at the beginning of February. 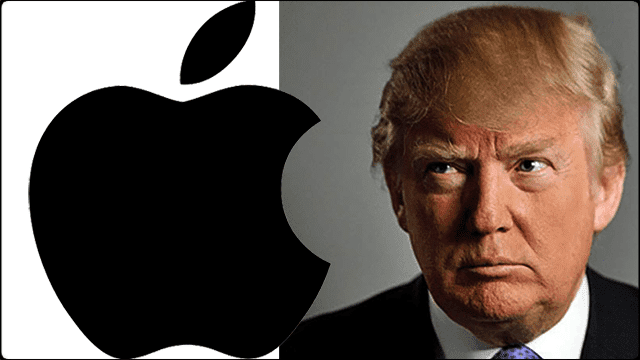 If Trump continues to prod companies like Apple (and the rest of silicon valley, for that matter), it’s a safe bet that he loses those battles. Here’s why:

The cornerstone of Trump’s campaign was his pledge to bring jobs back to the US. As a result, the Trump administration is considering changing the H-1B visa laws to make it tougher for companies like Apple to hire foreign workers. Basically, some of the proposed legislation would raise the salary requirement of H-1B visa holders in the hopes that businesses find it cheaper to hire American workers instead of foreign workers.

From the point of view of Americans who can’t find high-paying work today, this idea makes sense. From their perspective, they’re thinking “Why should immigrants get all these high-paying job opportunities at places like Apple and Google, instead of me, an American citizen?” Their frustration is real, but their logic is misplaced.

Here’s the problem: H-1B visa holders are typically very high-skilled employees. They’re often people with specialized degrees. And the American labor market simply cannot meet the demand for these kinds of jobs. If the H-1B visa program disappeared completely, for example, Apple would not find enough high-skilled engineers to fill its vacancies.

The bottom line is that our educational system just does not supply enough high-caliber engineers to meet the demand of silicon valley. These jobs aren’t being “stolen by immigrants,” because they were never available to Americans, to begin with. Like someone on Twitter sarcastically put it, “Yes, Johnny with a high school diploma, Amit, the neurosurgeon stole the job you could’ve had.”

So this puts Trump’s administration in an awkward position: forcing legislation that “encourages” more US jobs, might instead hurt the profitability of American companies, creating even fewer job opportunities for Americans. To fulfill his campaign promises, Trump needs companies like Apple to continue to succeed. Even Trump supporters will walk away if iPhone prices start going up as a result of new legislation.

Don’t Blame Immigrants! US Manufacturing Is Not Coming Back

I hate to be the one to break it to ya, but these blue-collar jobs aren’t coming back. No amount of executive orders or new legislation by Trump and his gang changes this. Only wishful thinking keeps this idea alive. Between automation and artificial intelligence, why in the world would tech companies or ANY COMPANY go back to old manufacturing processes that require thousands of workers?

Even if Apple suppliers like Foxconn decide to bring iPhone manufacturing to US soil, the manufacturing processes are only going to become more automated, so there won’t be a major increase in job opportunities for unskilled laborers in the long run.

The average Trump supporter (and probably even Trump himself) believes that cheap labor overseas is to blame for the lack of jobs at home. The much bigger culprit is automation, and there’s nothing Trump can do to stop it. In fact, it would be a terrible waste of time and energy to try to stop it, which seems to be, unsurprisingly, what he’s trying to do.

With Trump’s rhetoric about China stealing our jobs and Mexico having an “unfair” trade deficit, the general theme is one of anti-globalization and isolationism. This kind of talk is a mistake and makes the United States less competitive in the global market. Trying to cling to the past is always a losing battle. It would be like trying to the “good ‘ol days” of high horse sales when people are driving cars. Innovation will always win in the end, and innovation is on Apple’s (and the tech sector’s) side.

In line with his rhetoric, Trump talks about adding ridiculously high import tariffs to Chinese goods and essentially starting a trade war with China. If Trump picks this battle, he will lose. And not just because the cost of Chinese goods will rise substantially or because American’s buying power will shrink. No, the real losing battle is that Trump would be taking on a heck of a lot more US-based corporations (in addition to Apple), and those companies have more government sway than Trump.

Let’s not forget that senators and congresspeople are often more responsive to the needs of their donors and major interest groups (i.e. corporations) than to the people they represent. The tech sector AND bread and butter companies like Walmart will feel significant pain if Trump rocks the boat with China. Collectively, these companies are way bigger that the entire US government (in terms of revenue). A tariff on China and the subsequent high prices for cheaply made goods would unite consumers and corporations against Trump, and he will have no chance of winning that battle.

Apple is More Influential Than Trump Will Ever Be

Apple is the most admired brand in the world, and Trump’s approval ratings are in the single digits internationally. So based purely on likability, Apple beats Donald Trump globally by a “YUUGE” margin. In any head-to-head confrontation between Trump and Apple, Americans and people around the globe are more likely to take Apple’s side. 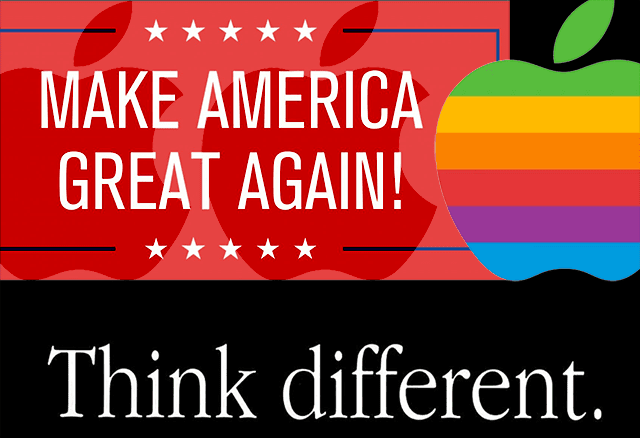 Not surprisingly, Trump is looking for ways to please Apple through favorable legislation. Last November, Trump told the New York Times that he had spoken with Apple CEO Tim Cook about bringing back manufacturing jobs to the US, and offered him “…a very large tax cut for corporations, which you’ll be happy about.”

This tone is a far cry from the boycott he called for earlier that year and a clear sign that he knows that Apple is not a company to pick battles with.