You are here: Home / iPhone / Tweetbot: An amazing twitter client for iPhone

Using the official twitter app for the iPhone is fine, but it’s not the prettiest thing in the App Store; so if your looking for the nicest looking twitter client out there, look no further than Tweetbot by Tapbots.

If you’ve come from the official twitter app, Tweetbot won’t be a huge shock to you in terms of user experience, but the app does have a few differences from the official app. First of all, you’ll notice as soon as you open the app, the user interface in beautiful. Honestly, you won’t find another app (not made by Tapbots) that looks this amazing. It is the best looking app I’ve seen in a long time, and it’s one of the reasons I bought the app (and why you should too). The app is split into 5 beautiful sections, your timeline, mentions, messages, favorites, and search. Each section is pretty self explanatory, and offers nothing different from other Twitter apps.

There aren’t any outstanding features that I haven’t seen in other Twitter apps, but that’s not a bad thing, I have yet to find a feature missing from the app. Tweetbots chose to be equals in comparison to other apps, but pushed the barrier when it comes to the look and feel of the app. The real reason someone would buy and use Tweetbot as their main Twitter app, is because of how beautiful Tapbots has made the app. This app is one of the best looking apps on the App Store, and you could definitely spend $1.99 on worse. 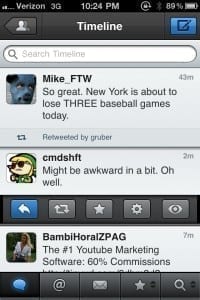