You are here: Home / How-to / How to use Siri on macOS Sierra

For those of your that were using Sinus App from Rafael Hannemann to get around the problem on your Mac, (Just to hear the Siri Voice), the wait is finally over. With macOS Sierra, users can finally use full power Siri on their Macs. 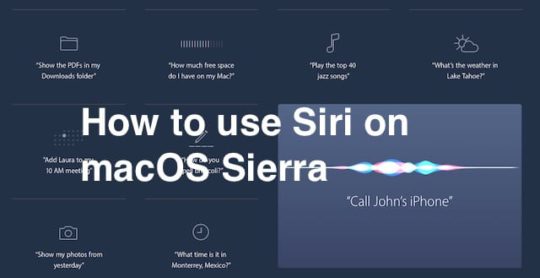 Siri will be launching alongside macOS Sierra this fall, and will work on the following machines:

Not only has Siri been added on macOS Sierra, it has been reworked to take advantage of the power and capabilities of the Mac.

Here’s how to set-up Siri and how to use it:

For starters, you’ll need to enable Siri on your Mac. To do this, launch System Preferences, and click on Siri. 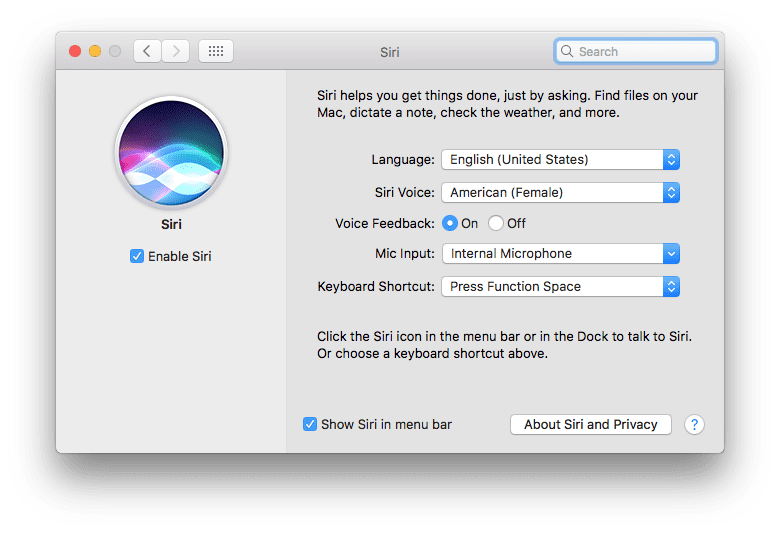 Once in this menu, be sure to check off ‘Enable Siri’, and we also recommend using a keyboard shortcut for easy access.

After doing this, you can access Siri via your keyboard shortcut, the menu bar, or your dock via a new ‘Siri’ app.

Once you launch Siri, she’ll be listening and waiting for an instruction, you can ask her for most things you’d ask for on your phone, like directions, reading notifications, movie showtimes, sending texts, and so on. 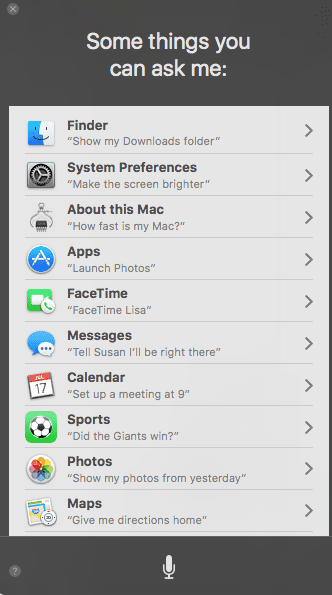 In addition to the things you’ve come to expect Siri to do, Siri can now also do things like change options in System Preferences, and show you Documents. The Document search is deep, so asking to “find the spreadsheet I was working on yesterday” will show spreadsheets you worked on yesterday.

Siri Not Working on Macbook

Several users have noted that they get the not working message when trying to invoke Siri. “Sorry, there’s something wrong. Can you please try that again?”. Nine out of ten times this happens because of a microphone setting. Please check your mic input on your Siri setting and make sure that it is pointing to internal microphone as opposed to external microphone. That will take care of this issue.

OS X Mavericks introduced Enhanced Dictation, a feature that allowed Mac and Macbook users to dictate speech offline. This meant that all phrases were stored locally in the Mac, and the Mac was able to respond intelligently. With Siri, your speech is sent to Apple’s server, meaning you will need to be online in order to use Siri. While this is perfectly normal for virtual assistants, and Apple has a stronger stance on privacy than any other tech company, you can easily disable Siri on your Mac by going into System Preferences, go to “Siri” and un-checking “Enable Siri” box from earlier. Siri is only activated when you choose to activate it, it is entirely off otherwise.

Siri for Mac is launching alongside macOS Sierra this fall, but you can try it out now with the Public Beta. To learn more about the public beta, read out guide to installing betas.