You are here: Home / Mac / How-To Use Type to Siri in macOS High Sierra

Siri was initially created to answer your questions and help you out in tasks by just talking to it. Over the years Apple has added continued intelligence into Siri’s design, and today it’s found on MacBooks and most other Apple products. So you no longer need an iPhone to access and interact with Siri. In the latest release of macOS High Sierra for Macs, Apple includes a new feature called Type to Siri in macOS that lets you type out instructions to Siri rather than speaking. 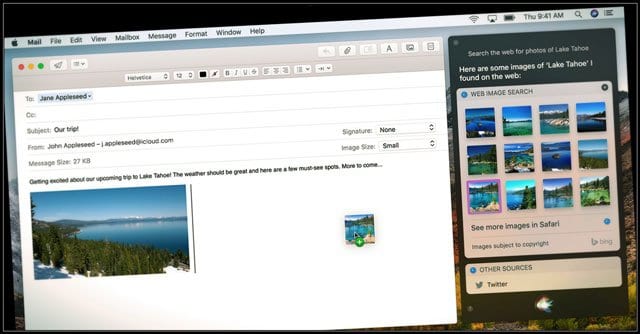 For folks using a Mac mini or a Mac Pro, we can now use Siri without having to connect a microphone for Siri to hear us!

Why Use Type to Siri instead of Speaking to Siri?

It’s common to see users complaining about Siri’s error-prone interception of voice inputs and often ending up doing the wrong task. With the type to Siri feature, this problem gets solved easily. Plus you can also speak to Siri even when the type to Siri feature is running, so you get two ways to interact with this personal assistant.

Activating the feature on a Mac is pretty much a cakewalk! You find the option in the standard System Preferences on your Mac.

Make sure your Mac runs macOS High Sierra version 10.13 or newer or the Type to Siri in macOS won’t work for you. This feature isn’t available on Macs running earlier versions of macOS or Mac OS X, even those machines that have the standard speaking-Siri version available on them.

Have Siri on Your Menu Bar

Having quick access to Siri is a must for a lot of users. To get Siri on your main Menu Bar, open Siri’s preferences by choosing the Apple Menu > System Preferences  > Siri and tap Show Siri in Menu Bar.  Or if preferred, create a Keyboard Shortcut to bring Siri up (default is Funtions+Space Bar.) You can even customize your Keyboard Shortcut! 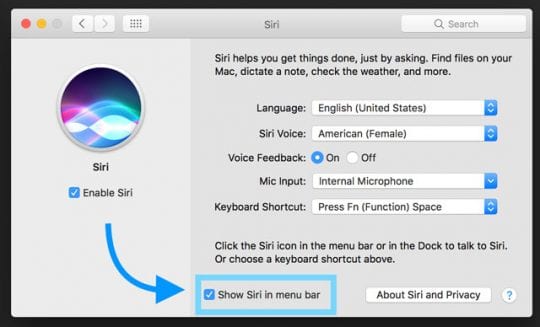 Using Type to Siri in macOS

Now that you’ve enabled the feature, let’s see how it works for you. To do that, trigger Siri by either clicking on its icon located in the top menu bar or clicking on its Dock icon. Once it launches, it should be ready to answer your text commands. To start with, merely type in “what’s the time in New York City right now,” and it responds you as if you had spoken to it.

All of the Siri voice commands should work with the typing mode as the only thing that has changed here is the way you interact with Siri. If you have found out the time in New York City, it’s time you ask it “what does the fox say” to hear some funny sounds.

With this feature included, Siri has now become more than just a voice assistant. As I mentioned before, the feature ensures Siri does the right task for you as it now has explicit text commands for it and it won’t have to translate your words into commands.

All in all, the type to Siri feature is worth having as it now provides you with one more way to interact with Siri. Let us know what you think about this new feature in the comments section below.