You are here: Home / iPhone / How to Use Voicemail Transcripts in iOS 10

Along with a series of other major changes to the Phone app in iOS 10, Apple has created a new feature for making voicemail easier.

One of the iPhone’s first major features allowed users to view voicemails individually and respond without ever leaving the phone app or calling a machine. This feature, called visual voicemail, has been on the iPhone since day 1, and is still not often found outside the iPhone ecosystem.

One of iOS 10’s new features, visual voicemail, hopes to expand the easiness of voicemail on iPhone even further, with voicemail transcripts. The feature, in theory, will allow you to not only view voicemails individually, but read what they said as opposed to listening to the original message.

Here’s how to use Voicemail Transcripts in iOS 10

Using voicemail transcripts is extremely simple, as it is on by default. To use them, open your phone app and head into voicemail. There, tap on any of the messages. You’ll either see ‘transcription not available, or you’ll see a transcription: 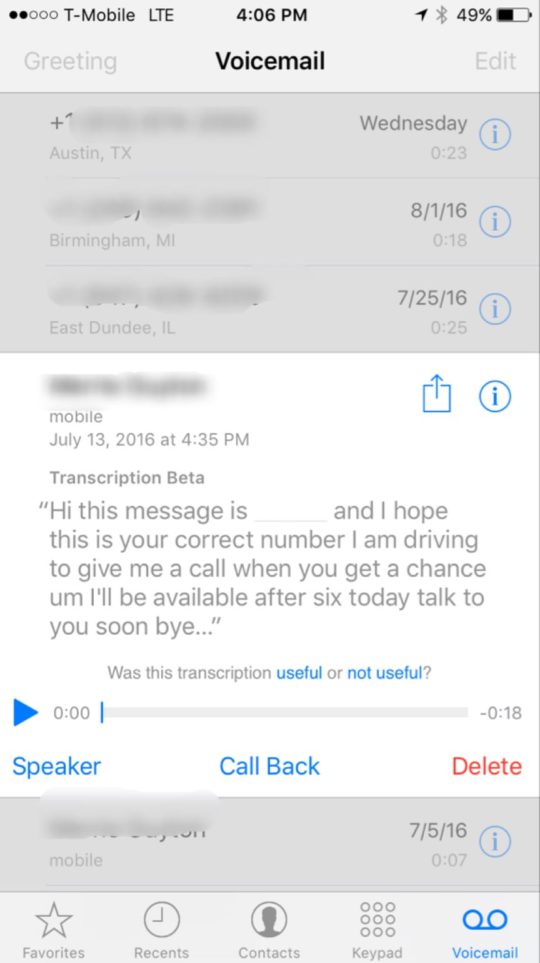 You’ll also see an option to mark if the transcription did a good job. In my experiences, it’s done well enough to understand what is going on, but rarely gets all of the message correct.

People like to leave voicemails but they don’t like to receive voicemails. There is also a generation gap when it comes to voicemail. Older people like voicemail while younger prefer text based communication. This iOS 10 transcription feature will bridge that gap.

Voicemail transcription is particularly convenient for business owners and employees who are often in meetings or on the go and need to check voicemail without listening to the entire message. With voicemail transcription, you can tell urgent calls from solicitations / telemarketers, and everything in between.

Visual Voicemail is a key feature of the iOS 10 system. Learn about all the other useful iOS 10 features and how to use them on your iPhone and iPad by reviewing our guide.