You are here: Home / How-to / How To Watch the Total Solar Eclipse on Your Apple Devices on Aug 21

From coast to coast, the moon will block the sun, and most Americans get a once-in-a-lifetime chance to catch it!

And what better way to watch the 2017 Solar Eclipse than using your iPhone, iPad, or another device. This article explains how you can view this Solar Eclipse on your Apple devices! 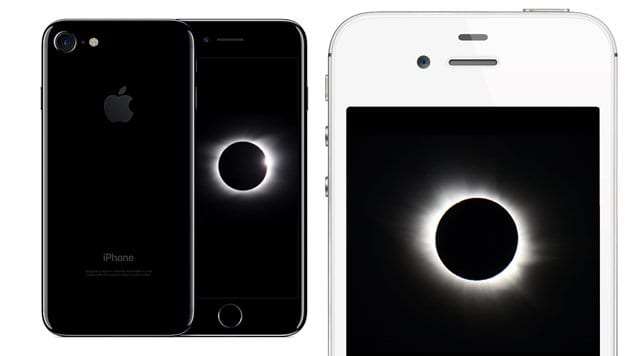 Although you can observe and see a partial eclipse (about 75%) from most of the country, viewing the total eclipse as it happens is limited.

The path of totality is limited to a narrow 70-mile wide path from Oregon to South Carolina.

Over the next hour and a half, it crosses through Oregon, Idaho, Wyoming, Montana, Nebraska, Iowa, Kansas, Missouri, Illinois, Kentucky, Tennessee, Georgia, and North and South Carolina. 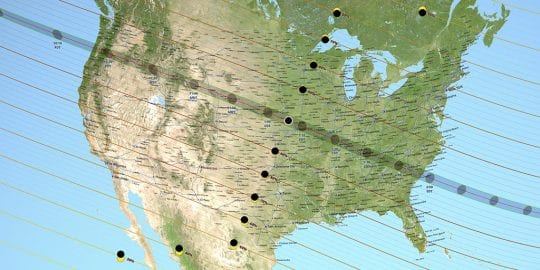 The total eclipse ends near Charleston, South Carolina at around 2:48 p.m. EDT.  Get a sense of the travel path via the interactive map made available by NASA.

Remember, however, that weather makes a difference. Clouds, rain, and storms may just spoil the view (and the fun) for some along this path.

Many die-hard space enthusiasts have already made their travel arrangements months ahead of time. Most hotels in this narrow path have been sold out for some time now.

If you are one of the enthusiasts who made travel arrangements, you should confirm your reservations as per the advice of Oregon Attorney General Ellen Rosenbaum.

It’s Not Just For Fun!

Okay, most of us just want to see it pass by. But for scientists, this is a learning opportunity. In particular, researchers hope that the eclipse offers up some valuable insight into our sun’s corona, that’s the halo of light around the sun that you see during a total solar eclipse.

Only during a total solar eclipse is the corona visible from Earth. This corona actually burns more than a million degrees hotter than the sun’s surface–and that’s why scientists are particularly interested in this event!

Viewing the Total Solar Eclipse on Your Apple Devices

You can still experience the viewing of this once in a lifetime event from your home using your Apple device and the NASA app. NASA plans on streaming this event.

For those of you that like to see a simulation before the actual event, you can download the NASA Eyes App on your MacBook. The Mac app is roughly 30 MB. 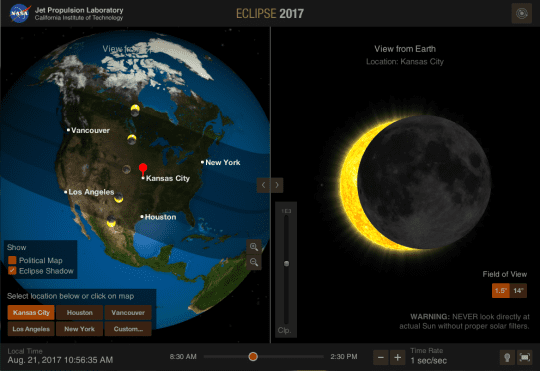 In this interactive, 3D simulation of the total eclipse of August 21st, 2017, you can see a view of the eclipse from anywhere on the planet.

Once you have downloaded and installed the program, click on the “Launch” button.  Once it has loaded, click on the “Explore” button at the bottom of the screen, and a split-screen view will appear showing a view of the Earth on the left side, and a view of the sun from your selected location on the right side.  You can enter your location in longitude and latitude in decimal degrees.

Once you have chosen a location, you can then watch a simulation of what the eclipse would look like from that area from start to finish!  This will give you an idea of how the event may look like from where you are.

NASA is going to be using at least three NASA aircraft and more than 50 high altitude balloons providing a unique vantage point for the celestial event.

If you have the Apple TV, you can download the NASA App from the tvOS App Store. Last Summer, NASA updated the app for Apple TV and added live streaming from ISS and tons of other on-demand video features.

You will also be able to watch this celestial event on your iPhone and iPad by turning it into NASA ‘s live streaming channel. You can get to the NASA real-time streaming page by clicking here. The live coverage will follow the eclipse as it moves across America.

Can’t I just Record it Myself on my iPhone or iPad?

The short answer is NO! iPad cameras take in enough light that pointing it directly into the sun could potentially damage your iPad’s sensor.

BUT If you have eclipse glasses, then you can take images with your iPad as long as you use them to cover the lens of the camera while you take your pictures.

And just so you know, if you tried to film using your iPad without the eclipse glasses, the results would probably not look very good (i.e., distorted, too much or too little light and shadow, etc.)

Your best bet for a good image

Instructions on Time-lapse Images on your iPad

What About Reflections? Or Selfies?

Assuming it’s safe to take a selfie with the eclipse in the background because you aren’t looking directly at the sun? Think again!

Most scientists AGREE–you should not view a solar eclipse with the naked eye EVEN through a reflected image (mirror, water, glass, even a shiny iPad or iPhone, or any type of reflective surface.)

The reason being that reflected images still contain the ultraviolet rays emitted from the solar corona during an eclipse.

And with those reflected rays pointing directly toward your eyes, it could result in a solar burn.

Because your eyes are looking at a reflected image (from a darker surface), your pupils actually enlarge, letting in more of the harmful rays–AND putting your eye health at MORE RISK.

It’s actually when you can’t feel a burning sensation that the sun’s ultraviolet rays cause the most retinal damage.

So no, don’t look at a reflected image of the eclipse. And no selfies either!

The safest way to view the eclipse is by wearing a pair of ISO 12312-2-certified solar glasses that are designed to filter out the sun’s harmful ultraviolet rays. Only when there is a TOTAL ECLIPSE is it safe to NOT wear protection!

And remember, that this is an experience so don’t forget to watch it live, with your own set of eclipse glasses! Plenty of news and other professional outlets are filming it (including NASA), so there’s lots of great recording out there if you ever want to see it again or share it with others in the future.

It’s time to block some off-time and make sure you are ready for the streaming event on your Apple devices!