You are here: Home / News / What Is AirTag, and When Is It Coming Out?

Apple’s 2020 Fall event is just days away, and the whole world is shaking in anticipation for Apple’s next decade-defining product:

Ok, so all the shaking is probably for the iPhone 12, but in this post, we’ll assume it’s for the first Apple product to be priced under $50 in a millennium (for legal reasons, this is hyperbole).

Today, we’ll explain what AirTag is, what we know about it so far, and what you can expect to see when it’s unveiled on the virtual stage this coming Tuesday.

First things first, what the heck are AirTags? AirTag is an unreleased and unannounced product from Apple that appears to be a rival to Tile. Tile (and subsequently AirTag) is a little white square that you can stick to anything with adhesive glue or attach to a keychain.

This little square then syncs with your phone via Bluetooth, telling you where your things are at all times. If you’ve ever lost your keys and wished you had an app to find them, Tile is that app. And for a long time, Tile has been the go-to app/device for this sort of thing.

That is until Apple unveils AirTags, which appear to be an extremely similar product that fits into the Apple ecosystem. About the only discernible difference that we know of right now is that AirTag will be a circle instead of a square and that it will work through the FindMy app on all of your Apple devices.

How will AirTags work?

For now, we’re not exactly sure. Most of what you’ll be reading through the rest of this article is conjecture based on leaks and rumors. If you want official data, you’ll have to wait until Tuesday (assuming that’s when AirTags are announced).

Until then, all we can do is speculate. And as speculation is so fun, speculate we will.

The current assumption is that AirTag will have a built-in proximity chip rather than Bluetooth. This proximity chip is expected to use ultra-wideband, as it’s accurate up to five centimeters, versus Bluetooth and WiFi being accurate to five meters.

When you first get your AirTag, you’ll (probably) hold it near your iPhone to start the setup process. Similar to Apple Card and AirPods, there will probably be a popup that appears, giving you a chance to pair AirTag to your iPhone.

From there, we expect most of the management to happen within the FindMy app. You’ll use options to name your AirTag, see where it’s located, make it play a chime, and so on. Then all you need to do is attach it to your keys, wallet, or luggage.

When will AirTag be released?

Again, we can only guess until Tuesday, but we feel our guess is likely to come true. It seems like AirTags will be announced at Apple’s September event on the 15th alongside the iPhone 12. As far as when AirTags will be available for purchase, we believe this will happen early into October.

These guesses are based on known delays in Apple’s supply chain from the Coronavirus as well as previous product launches.

Yes and no. While Apple hasn’t posted a catchy sticker on their website announcing AirTags yet, they have (unintentionally?) revealed that the product is more than a rumor. 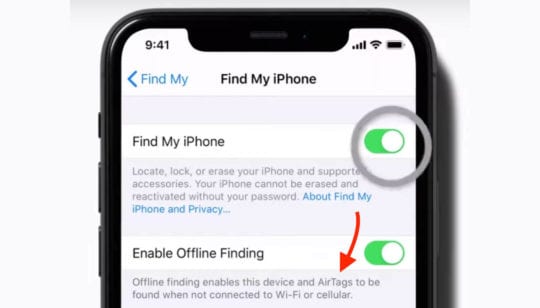 In one of the support pages on Apple’s website, Apple posted a screenshot from an iPhone that showed AirTags mentioned in subtext. Beyond that, some sneaky sleuths have discovered code in iOS 13 and iOS 14 that mentions AirTags. Not only are they mentioned, but they actually give us a peek into what AirTags might do (more on this in a moment).

From these snippets and leaks, we’ve also gathered that AirTags will probably be a flat, white circle made of plastic, with an Apple logo smack in the middle.

Everything we know so far (kind of)

Finally, to sate your (and our) fanboy curiosity, here is everything we know and suspect about AirTags. As a final warning, this is all based on guesses and leaks, blah blah, so don’t take any of it too close to heart.

How much will AirTags cost?

The question that everyone wants answered. Unfortunately, Apple failed to hide the price of AirTags anywhere in iOS 13 or 14, so we’re not quite sure what they will cost. If the pricing is similar to Tile, then you can expect to pay around $30 for AirTag. If the pricing is more “Apple” than “Tile”, then we might be looking at $50 per AirTag.

As covered, we expect that everything AirTag-related will be managed through the FindMy app. In the app, you’ll have the option to place a lost item into “Lost Mode”.

Once in Lost Mode, your AirTag will start pinging all nearby iPhones and returning that information back to you. This way, you can find your lost things even if they’re nowhere near your person.

It’s not entirely clear what all will be possible through Lost Mode (i.e., we’re not sure if you’ll be able to chime your AirTags this way) but it appears distance won’t prevent you from finding your things.

I’m inclined not to believe this one, although I hope to heaven that it’s true. Code in iOS 13 appears to point to AR balloons being used to help you find your AirTags.

“Walk around several feet and move your iPhone up and down until a balloon comes into view.” – iOS 13

I’m not convinced that the AR on iPhone is capable of this yet, but as a tech nerd, these are the sorts of things that get me giddy. Apple, if you aren’t working on this, please start working on it. I will lose my keys on purpose every day just to play with this.

According to current rumors, it does appear that AirTag will make sounds. This makes sense, as you can already play sounds on all of your Apple devices (except AirPods) through the FindMy app. However, it looks like AirTags are going to be more complex in this department.

“You’ll hear encouraging sounds when you face the right direction so the lost gadget is “Ahead” of you, when you’re “Nearby”, or come within “Arms Reach”, while discouraging tones hint that you’re headed off course.”

In other words, AirTag might use a “hot and cold” approach to helping you find your things with chimes. This seems a little redundant to me, as I’ve never had trouble finding something that’s making a loud noise, but hey, I’m not complaining.

How will AirTag attach to devices?

We believe that AirTag will attach to devices via an adhesive. There will probably be a peelable film on one side of the AirTag. Once removed, a sticky surface will be revealed. You can then stick the AirTag to anything you don’t want to lose.

We also expect AirTags to feature a key ring attachment (i.e., a hole punch) so that you can use it with your keys. Apple may go the Tile route and offer different versions of the AirTag, or it may have an all-in-one AirTag that has a hole punch and adhesives.

It’s also possible that Apple will announce an AirTag that doesn’t attach to anything. This AirTag would be used for things like backpacks and purses.

Will AirTags have a replaceable battery?

AirTags will almost surely be powered by those little disc batteries found in watches, as they’re lightweight and long-lasting. If this is what Apple chooses to use, then they could certainly build the AirTag so that you can easily replace its battery.

For now, there are no clear indicators on whether or not the AirTag battery will be replaceable.

Getting ready for Apple’s September event

I don’t know about you, but talking about the potential AirTag announcement has gotten me fired up for Tuesday’s event. If you haven’t already, you can add the aptly named Time Flies event to your calendar here (it’s Tuesday, September 15th, at 10 a.m. PDT).

Of course, we’ll cover all of the announcements and updates here at AppleToolBox, so be sure to tune in!