Own an Apple device? Then you need to get familiar with the iOS. As the operating software that runs on all Apple products, it’s the platform where all your favorite apps live. Get to know what your iOS does and how to keep it up to date. 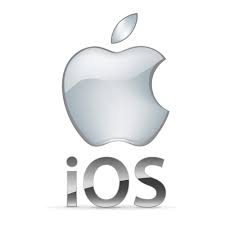 iOS is the operating system that is running on your Apple device. It’s pre-installed on all Apple devices, such as the iPhone, iPad or iPod touch, which means that your experience across these devices will be pretty much uniform. You can know what to expect when you’re switching from one device to another. When interacting with your Apple device, you will be getting the experience that Apple’s software team has designed, from the way the interface looks to how you navigate your way between apps.

How to Check Your Software Version

Not everyone has the same version of iOS running on their Apple device, as Apple updates iOS regularly. There’s an easy way to check which version is running on your device.

We are currently in the iOS 9 environment awaiting the iOS 9.3 to be released to the public some time soon. 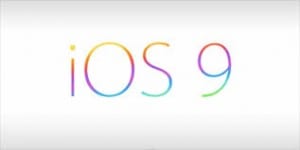 Should I Update the iOS version?

It depends. Apple does recommend that you update your devices to the latest iOS versions when they are available. in our opinion, there are a few guidelines that can be followed. If you have the latest iPhones or iPad models and you are always on the cutting edge of things, it makes most sense to update. This allows you to try out the new features such as night mode when it is released. There is also a window of time, usually two to three weeks, during which you can choose to downgrade your iOS version if you are experiencing issues with the latest update.

If you are on iOS 9 – upgrading to patch levels doesn’t break existing apps and solves known security, performance, energy efficiency and bug issues, so declining a 9.0.x or 9.x update is far harder to justify than just not upgrading to 9.0 in the first place. This has always been the mantra from Apple.

However if you are using an older generation device or are unmoved by the hype around the new features of the latest iOS, you may choose to wait for some time and evaluate. When the new piece of iOS is released, it can be buggy with certain features and Apple subsequently releases a beta to fix those issues. Within three to four weeks of the release, if there are major bugs, you will hear about it in the headlines. An example of this was when people migrated to iOS 9 from iOS 8. Initially there were a lot of challenges as the software had bugs. Some folks waited for months before upgrading to iOS 9.

What should i do about the annoying reminders? 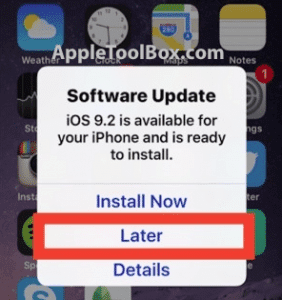 When Apple releases a new iOS version, you will start seeing the message in your device to update. For folks that do not want to update, this can be annoying.

So what you must do is the following:

Click on the Settings icon. Then click on General. click on Storage & iCloud usage. It might just say Storage on your device. When the next page pops up you will see at the top the word Storage. Under it you will see Manage Storage. Click on it and wait till the list is fully populated. Depending on how many apps you have this can take a couple of seconds to about half a minute. Look through this list till you see the new iOS update. Delete it. Then your pop up notice should go away. Don’t worry about loosing the update. You can always get it later in the future. If in the future you get the pop up again, then that means Apple has again downloaded it to your phone or iPad without your permission. Simply do the above all over again to delete it and get rid of the new pop up. This is the only way to get rid of the pop up without installing it.

Please keep in mind that when you charge your phone with wi-fi enabled, it will again download the iOS into your device. You may have to out your device in Airplane mode while charging to handle this issue.

This is only a temporary fix. Your device will always download a new update when plugged in and connected to wifi, so you will repeatedly have to delete the update to avoid this annoying notification. Or always put your device into airplane mode when charging. Not ideal, but that’s the best workaround short of blocking the update server from your router. To  put a block on your wireless router to prevent your Apple iOS devices from contacting Apple update servers You can Add mesu.apple.com to your router.

How to Update Your Software

You can update your device wirelessly or via iTunes. When a pop-up notification appears to say that an update is available, simply tap ‘Install Now’. Otherwise, you can plug your device into a power source and connect it to Wi-Fi. Go to Settings, then General and tap on Software Update. Tap Download and Install.

You may see a notification that tells you that you need more space freed up for the update, so you need to remove some of your apps. You can choose to Cancel or Continue. Don’t worry, if you do uninstall apps, iOS will reinstall them after the update. In order to update immediately, tap Install. You can also choose to Install Tonight or at some other point by tapping Later.

There will be another notification reminder for installation. If you tap Install Tonight, simply plug in your iOS device to a power source when you go to bed. Overnight, the update will be installed automatically. You can also update your iOS via iTunes if there isn’t enough space on your phone. It’s important to note that your computer will need to be connected to a network besides your personal hotspot on the iOS device that you are updating. You will also need to have the latest version of iTunes on your computer. Then, connect your device to your computer, open iTunes and select your device. Click summary, then Check for Update. Click Download and Update.

Overall, updating your iOS will keep your device well-protected against potential vulnerabilities and will keep it running smoothly. Keep this on hand to check your current iOS version, or to help guide you through the process next time an update comes out.

RELATED: What can we look forward to in iOS 10?