You are here: Home / Q & A / Why Flash Is Not Supported on Apple Products (iPad, iPhone, and iPod Touch) and the Ways Around It. 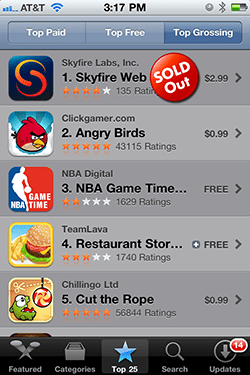 Apple products are arguably the best mobile electronics on the market. However, one problem that many users have with the iPad, iPhone, and iPod Touch is that they don’t support Flash content. There is a long list of things that cannot be run without Flash, many online games, banner ads, cross platform applications, some online video content. This sort of content was originally built for PCs running high powered web-browsers. However, over the last few years, the amount of mobile internet consumption has flipped the web app world on its head. Most smartphones and mobile devices do not run Flash. Steve Jobs, in april 2010, spoke as to why Apple, and by extension other smartphones, and mobile devices do not run Flash. Those reasons that are important to the user are:

1.  Flash apps are not intended for a touch interface:

This is the biggest concern for the user. Point and click apps just flat out do not work on a touch based device. Some apps do run off of keyboard input. So there is a way around this using one of the bluetooth keyboards available for Apple mobile products. For mouse driven apps the capability of these apps is seriously decreased when using a touch interface.

Jobs described their desire to be shown by adobe any mobile device running Flash well, and securely. He has not see it. He also noted that Flash apps have been a major cause to Macs crashing. Apple does not want to jeopardize security and reliability on their mobile devices with Flash.

The long and short of battery life and Flash is that to run a Flash video for example a device must decode the video and encode it to a form it can play, which takes a lot of power and therefore drains the batteries. It was noted that battery life while watching a Flash video was half as long as when you use a native video format for iPhone.

A new app available in the app store called Skyfire enables you to run Flash on iPhone, iPad, or iPod touch. “Within 5 hours, Skyfire for iPhone became the top grossing app, the third highest paid app overall and the top application in the Utilities category,” Skyfire Labs said in a blog post. In other words, Apple users made it clear that they want access to Flash on their iOS devices.

Prices for Skyfire are $2.99 for iPhone, and 4.99 for iPad. Skyfire is a web-browser for iPhone and iPad that plays Flash content. Other than play Flash, which is it’s major draw to consumers, it has social media sites built right into the browser. It has pop up bars that are reminiscent of firefox toolbar Applets that show your Facebook, Twitter, and other social media sites. So you can check all of your social media without opening a new tab.

The way Skyfire works is it when you come upon a page that contains Flash video that the iPhone/iPad cannot play you click it and it sends the work to be done on Skyfire’s servers. They process it, look for video content, and then convert it to a form that your device can play. Then it is sent to you to view it. The major drawback for a lot of users is that Skyfire does not support Flash games. There is no way around this for the user, this is just not what the app was intended for.

Another app is Cloud Browse. Like Skyfire, Cloud Browse lets you view Flash content on an Apple device. Some users have reported that they are unsatisfied with this product. One user, for instance, stated that:

“There is a 2 second lag with every action, scrolling or typing. If you are dreaming of flash video, you can forget about that. It logs you out every 5 mins and asks for a payment. Not worth 99 cents.”

Cloud Browse and Skyfire are both available from the Apple App Store. They don’t require a jailbreak, but allow you to view Flash Videos and use Java applications. It is essential to mention that they do not support all web sites that use Flash Video.

Your next option for using Flash content on an Apple device is to download Frash. This app is not available in the app store so it requires that you jailbreak your phone and download Cydia. Your first decision is whether you are willing to jailbreak your phone or not to do this. Even with jailbreaking now legal in the U.S., is it worth the related risks such as voiding your warranty agreement with Apple? This app is not perfect and has been noted as unreliable, but you can run a lot of things that you wouldn’t be able to run with anything available in the app store.

The long and the short of Flash with Apple mobile devices is that they are largely ineffective. They have bugs and do not cover all of Flash content on the internet. Flash was not meant for touch based mobile devices, and Apple products are not built for Flash. However, these apps do support a good number of sites and apps. So however little they work, that little bit beats not being able to use any Flash. If you are looking to just play Flash video Skyfire is your best bet. If you want to run Flash apps, play Flash games and watch some Flash videos Frash is for you.