You are here: Home / iPad / Will Apple Release A New iPad In September?

Since late August, rumors have been circulating around the announcement of a new iPad at Apple’s September event, “Time Flies”. There’s no way to know for sure if Apple will announce an iPad alongside the new iPhone 12 and Apple Watch Series 6, but based on current leaks, it seems likely.

Leaks are usually straightforward, but the data surrounding the upcoming iPad is surprisingly vague. It’s not clear whether it’s the standard iPad or iPad Air that’s being upgraded or which features will be present. All we know for sure is that whatever iPad model it is, it’s about to get an entire makeover.

Here’s what we (kind of) know so far.

This is one of the pieces of data that seems to be undisputed. It looks like the next iPad is set to take the path of the iPad Pro and iPhone in removing its Home button. If this happens, this will be the last device to join the Thin Bezels Club over at Apple.

However, some leaks seem to point to TouchID remaining on the iPad but being moved to the Power button. According to this tweet by DuanRui, which appears to be a user manual for an iPad, TouchID will still be present on the Home-button-less iPad. 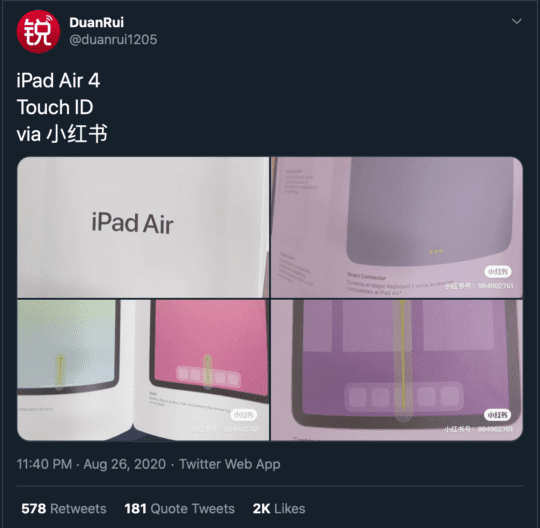 If this is true, then it may be that TouchID will be moved to the back of the iPad or the Power button, as it has been moved on some Android phones. While this isn’t as exciting as FaceID coming to the base iPad, it does make sense.

As FaceID is only present on more expensive Apple devices, it’s fair to assume that it’s a moderately expensive feature to implement. Also, keeping FaceID exclusive to the iPad Pro gives the “Pro” title more prestige.

Sure, there is a lot more to the iPad Pro than FaceID, but simple, obvious differences make it easier to sell it as a pro device. The mainstream might not fully understand RAM or cores, but they can easily understand the difference between TouchID and FaceID.

For now, it’s unclear exactly how the new iPad will unlock, but we can see it easily going in either direction based on current knowledge.

One of the benefits of removing the Home button on the iPad is that it will instantly increase the size of the iPad’s screen. Based on what we currently know, this change will bring the display to 10.8″, up from 10.5″ on the current model. Not a significant increase, however, that’s not too far off from the 11″ iPad Pro, so it’s not a negligible increase either.

Included in the tweet from DuanRui is the rumor that the new iPad will move to USB C. If true, this would be a significant step forward in moving Apple’s entire lineup of products USB C.

When will the new iPad be announced?

This is the trickiest rumor of all to pin down. At the moment, there are two possibilities, and it seems that one of them will definitely come true.

The first is that the new iPad will be unveiled on September 15th during the Time Flies event alongside the Apple Watch Series 6. If this is the case, then the iPad will most likely be a refresh to the base iPad. Timing-wise, this makes sense, as Apple unveiled the last iPad last Fall, whereas the iPad Air 3 was announced last Spring.

However, the changes that are going to be announced for this unknown iPad are so significant that it would surely make this a smarter purchase than the existing iPad Air 3. The iPad Air is priced higher than the iPad, and so having a base iPad on the market that outpaces its more expensive cousin doesn’t make much sense.

So, if these leaks are in fact for the iPad Air 4 and not the next iPad, then it’s more likely that the iPad described in this article will instead be released in Spring 2021. This is when the next iPad Air is expected to be announced, and it matches up with past product announcements.

The new iPad is just one of the announcements expected to happen at Apple’s September 15th event. Be sure to mark it in your calendar and tune in here at AppleToolBox for all of the updates.