You are here: Home / News / Will iOS 13 be delayed and released later than September?

Typically, Apple releases the new operating system on the day of the event in September.

According to some popular sources on twitter, Apple may be behind in finalizing the new iOS 13.

Marco Arment, a popular app developer thinks that there is a significant chance of iOS 13 slipping on the release date and the new devices may ship with a copy of iOS 12.x. 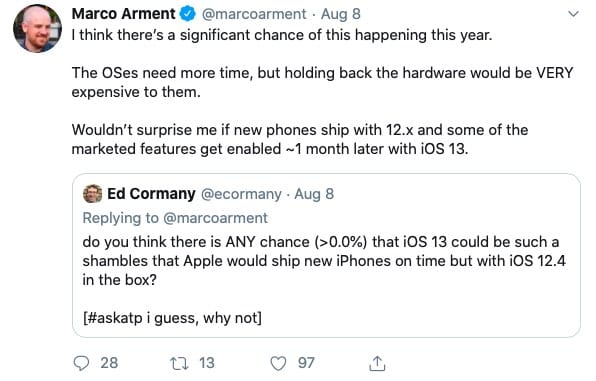 In another informal survey done by a popular developer, Steve Troughton-Smith, 40% of respondents voted that they were comfortable ( 4 out of 5 stars) with the new iOS 13 based on their experience and it would be ok for Apple to release the software to the public. 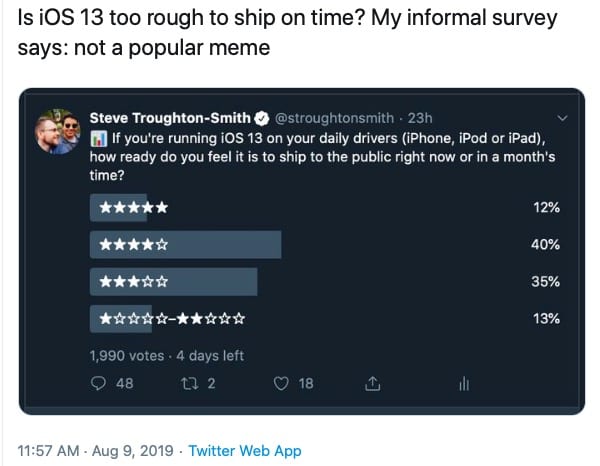 Other popular Apple followers have also expressed concerns given the state of current betas of  iOS 13.

Has there been a time in the past when something like this has happened?

We vaguely remember about consecutive iOS releases in 2010. In September 2010, Apple released iOS 4.1 along with the popular new iPods.

The iOS 4.1 was also the first iOS to unveil Game Center.

Following the September release, Apple had already announced plans for iOS 4.2 for November. iOS 4.2 was planned to deliver iOS 4.1 features to iPad Users as well as offer features for wireless printing (AirPrint) as well as Airplay.

iOS 4.2 was Apple’s major release that unified Apple’s mobile software platform across all its devices.

Given the changes in iPadOS and Apple’s work on project Catalyst, it is quite possible that if these speculations are true we might see something like 2010, where the major iOS release is released closed to November.

Apple has always given importance to performance and stability and releasing an iOS that is not stable may not be the move in the right direction.

There is still more than a month’s time before the event so it is quite possible that some of the issues that users are seeing with their Beta will be squashed by then. We have found the iOS 13 beta pretty stable starting with B5 except for some lingering bugs in Mail app and a few other areas. The watchOS and macOS still have many issues that need resolution.

Only time will tell…