You are here: Home / News / You Can (Finally) Build Apps On iPad In Swift Playgrounds 4

Last week, Apple held its annual WWDC21 event. During that event, a plethora of exciting announcements were unveiled, including things like FaceTime’s revamp in iOS 15 and the all-new macOS Monterey. A feature that stood out to me, though, was an update coming to Swift Playgrounds 4. You will now be able to build apps on iPad.

For those that don’t know, this has never before been possible. If you wanted to build apps for iPhone and iPad, you had to use a Mac.

In earlier versions of Swift Playgrounds, the app was as the title describes it: a playground for code. This made it a super valuable tool for new and existing developers to learn how to create apps and code for iOS and iPadOS. This app is so good that I think it is a viable tool for launching a coding career.

The problem was, once you learned how to code in Swift Playgrounds, you were stuck! Unless you had a Mac, you had no way to make use of the skills you had learned.

But that’s all set to change in iPadOS 15.

Swift Playgrounds 4 will allow developers to build apps on iPad

The headline says it all. You can build apps on iPad, for iPad, in Swift Playgrounds 4. But what does that look like?

According to Apple, building apps in the latest version of Playgrounds is going to be pretty solid. You’ll be able to preview your app on your iPad’s Home Screen. This preview will be live, so you’ll see changes happening as you make them in the app. 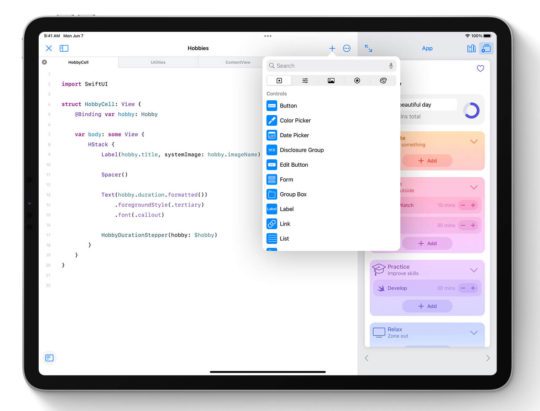 Live preview in Swift Playgrounds is a pretty big deal, considering that you would normally need to compile and run code before seeing your changes reflected.

This is a huge win for developers, especially those with limited resources. First-time developers without access to a college education can now learn the fundamentals in a valuable market with practical application.

Not only can you build apps on iPad, but you can submit them, too

To me, the ability to build apps on iPad is only half of what makes the Swift Playgrounds 4 update so exciting. The second half is that you will also be able to submit your apps to the App Store, too. 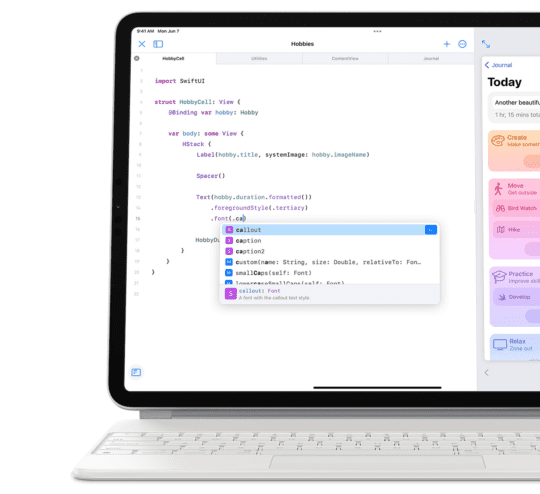 From what I understand, this will be similar to submitting eBooks from Apple Pages to Apple Books. You’ll build your app on iPad, bug test it, then export it to the App Store. Apple will then review it and approve or disapprove it for the App Store.

According to developers, this makes publishing apps to the App Store significantly simpler. Most of us know that getting an app published on the App Store involves jumping through lots of hoops and criteria. But I wasn’t aware that even figuring out how and paying for the ability to submit to the App Store was its own challenge.

This barrier of entry has now been lifted for anyone with an iPad. And since the iPad is just $300, those with a budget too small for a Mac can now participate in the App Store marketplace.

Is Swift Playgrounds 4 the solution developers have been waiting for?

So far, I’ve just been covering all of the hype and good news around this decision. In fairness, though, there are some limitations to Swift Playgrounds 4 that need to be addressed.

First, having the ability to build apps on an iPad doesn’t mean that you have everything you need to create a great app. That’s a pretty big oversimplification. It leaves out things like version control, plugins and templates, GitHub integration, and more.

Second, and building on the first point, Swift Playgrounds is not an IDE. So even though it can technically be used to build apps, it’s not a very good tool for the job.

I would compare it to using a Google Chromebook in place of a computer. Sure, it can do the bare minimum, which is helpful to a lot of people. But eventually, if you want to grow as a developer, the bare minimum will stop being enough.

Xcode vs. Swift Playgrounds 4: How powerful is the iPad for developers?

And that brings us to the important comparison, Xcode vs. Swift Playgrounds 4. For those that don’t know, Xcode is Apple’s set of development tools on macOS.

Xcode comes free with Mac and includes a whole suite of comprehensive tools for developers. It’s so robust that you could buy a Mac and seldom need to download any other tools for your development process. You probably wouldn’t want to do this, of course, but the point is that it’s a very solid set of tools.

All you’re getting in Swift Playgrounds 4 is the ability to start writing code for apps and seeing those apps take shape. I would compare this to games like Dream on PlayStation, which allow you to kind of build your own video game, but kind of not.

The problem, for now, isn’t Swift Playgrounds – it’s the iPad. This is in many ways the first serious update for developers the iPad has gotten in ten years. It’s got a long way to go before you can throw Xcode on Mac in the trash bin and grab an iPad Pro instead.

That’s a quote from an R&D lead at MacPaw, Serg Krivoblotsky. And I think it sums up the limitations of the Swift Playgrounds 4 update perfectly.

It’s an important update that will lower the cost of putting an app on the App Store substantially. But it would be dishonest to pretend that that’s all you need to be a developer: Writing code and submitting apps.

Even though this update won’t be enough to replace a developer’s computer yet, I do see some use cases thriving.

The first is student developers. I remember dropping out of computer science college a few years back and learning more on Swift Playgrounds in two weeks than I had during my two semesters at school.

That’s not to say that you should drop out (don’t!), but it does showcase how good the education component of Playgrounds is. And who knows! If I had been able to write and submit apps on my iPad then, maybe I would’ve stuck to it instead of eventually growing bored.

Regardless, I can see tons of people, young and old, breaking into the development field and hobby once they can build apps on iPad.

The second use case I can see is professional developers using this feature for prototyping. While you may not use this as a Mac replacement yet, you could probably use it to write and prototype apps on the fly.

So if you have a meeting with a client, you can bring your iPad and quickly type up rough examples of their ideas on the fly.

Predictions for the future of app building on iPad

I think that’s about all there is to say on that! You’ll be able to build apps on iPad starting this Fall, which will be a huge benefit to everyone. There’s still some work to be done, but progress is happening. That’s good enough for 2021!

Moving forward, I think there are a few routes Apple could take this feature.

One could be adding Xcode and other development tools to the iPad. In this route, the iPad would essentially get a one-to-one update to the Mac. So you won’t be forced to choose one or the other; it’ll just depend on which device you prefer.

Another route I can see Apple taking is making Swift Playgrounds an alternative to Xcode. In other words, Playgrounds would become an IDE as well as an educational tool.

If Apple goes this second route, then I can see coding on iPad getting the “iPad” treatment. That means simplifying everything while keeping things almost as powerful as they are on Mac. This would make it a complete, all-in-one solution for nearly everyone except the most hardcore professionals.

It could also make development a much easier and more intuitive job. Instead of balancing all kinds of different apps and process and legacy applications and configurations and versions and languages, you would just have this neat, organized app on iPad that does it all easily.

How long until you can build apps on iPad?

The Swift Playgrounds 4 update should be coming with iPadOS 15 this Fall. Generally, iPadOS updates come in September. So you should be able to build apps on iPad starting September of 2021.

Until then, you can start practicing your code in Swift Playgrounds today! And while you’re at it, you can brush up your knowledge on all things Apple by subscribing to and reading through the AppleToolBox blog.

See you in the next article!