You are here: Home / News / Yukari Kane: “I don’t think Apple is falling off of a cliff”

The story of Steve Jobs is the one of a passionate leader who inspires others to achieve the goal of building a leading technology company. It is true that his passion not always brought about the best results, like when he was separated from the company that he created. Years later, after being dismissed, he returned as a CEO rising, a shining star, and Apple shone with him. Jobs’ leadership is a clear example of how important leadership is in a company. 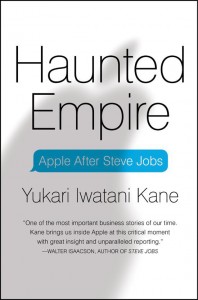 Leaders cannot be running their own companies forever. The time comes when they have to step down and let somebody else take the reins. Jobs was no exception. A long-time battle with cancer made him step-down as director of Apple and Mr. Tim Cook was transitioned into the top post at Apple.

A lot of doubts arose when this transition was announced. Will Mr. Cook be as innovative and inspiring as Mr. Jobs was? Will the new CEO of Apple be able to launch revolutionary products into the market? Is Mr. Cook the right choice? Now that the founder is gone, will Apple continue to be a leader in innovation or is it doomed to fail?

Veteran journalist Yukari Atwani Kane set herself to the task of investigating how the future would look for Apple after Jobs’s departure and Cook’s arrival. With 15 years of experience writing about technological markets and three years covering Apple for The Wall Street Journal, Kane’s opinions regarding Apple, its leaders, and future prospects are to be respected. She published the results of her findings in a book titled “Haunted Empire, Apple after Steve Jobs”. Her book has raised a lot of polemic and divided opinions among those who see Tim Cook as Apple’s new shining star and those who believe that Apple’s days of glory are already over.

When analyzing the book, the first question that arises is, “Why did the author write about it?” “What moved the author to research the leadership transition in Apple?” We had the pleasure of interviewing Ms. Kane about her book and her answer to this important question follows:

[quote style=”boxed”]“I covered Apple for the Wall Street Journal for three years through Steve Jobs’s passing. I had originally wanted to tell the story of how the company went from near bankruptcy to success, but halfway into my reporting, it became clear that a more interesting story about Apple’s leadership transition was happening right under my nose, so I switched gears. I intended my audience to be broad — anyone who owns an iPhone, an iPad or a Mac and is interested in reading a good story about an empire that is grappling with the loss of its visionary founder.”[/quote]

Ms. Kane’s research shows what happens in an organization when a charismatic leader steps down and has to be replaced by someone else. This kind of research was not an easy task as the developments were unfolding as she wrote. According to Ms. Kane, that was the hardest part for her, when writing her book:

[quote style=”boxed”]“The hardest thing was that events were unfolding as I was writing the book, so I didn’t know how my book was going to end. I was formulating my perspectives and opinions as I was writing.”[/quote]

To get a better understanding of who Mr. Cook truly is, Ms. Kane travelled to Alabama, Cook’s birth state, to analyze who he is, not as an executive, but as a human being. To get the full picture she traveled to Asia and spoke with suppliers, interviewed executives, competitors, and Apple watchers. She also analyzed financial statements, stock prices and product development:

[quote style=”boxed”]”There are many details sprinkled throughout the book. Some are trivia like the fun names of Apple’s meeting rooms. Others are stories from Steve Jobs’s last year that have never been told such as his 20th wedding anniversary gift to his wife and the last Top 100 management meeting. I also traveled 37,000 miles and visited 7 cities in Asia, Europe and the U.S. to get a holistic picture of Apple as the global company that it is. One of things that my efforts yielded was the most comprehensive profile written on Tim Cook. In addition to talking to many people who have worked with him, I visited his hometown of Robertsdale, Alabama, spoke to his old teachers and friends, and combed through the archives of the local paper to put that together. “[/quote]

As stated previously, the book has caused a lot of stir. In her book, Ms. Kane doesn’t praise Cook or make him look as though he is the brilliant leader that Jobs once was. She portrays him as uncharismatic leader who is not innovative in the least. Many people have criticized her book and cited some relevant reasons as to why they disagree with the book.

Critics have noted that the outcome of the book was already set by the author before she finished the book and that she dismissed the information that was not in line with her view. An accusation like this one is very serious and could discredit the author. This argument, held by numerous critics, contrasts with the author’s assessment of her own work, when asked if her view changed during the writing of her book.

Q/ Did your ideas and perceptions of Apple and Tim Cook change while writing the book? If so, how and why?

[quote style=”boxed”]“Absolutely. I sincerely thought at the beginning of the project that if anyone could stay at the top of its game after the loss of its visionary founder, it would be Apple. But I kept finding evidence otherwise.”[/quote]

Is her assertion correct? Has Apple lost its rank at the top of the game? The evidence suggests that she is right. The voice system Siri, is not as revolutionary as Apple claimed that it would be. Let’s not forget about the failure of the Apple Maps. Cook’s response to the Apple Maps debacle was to fire the person responsible for the failure. Is that what a charismatic leader does? That’s an open question for the readers to answer by themselves.

Another criticism of this book is that it conveys the message that Apple is doomed. Reading the book objectively may help them see that that’s not what the book is about. It is not about Apple falling off a cliff; it is about a company that faces a lot of challenges if it wants to remain on the top. One of the main challenges is the struggle of Mr. Cook trying to have his own identity and vision. Ms. Kane made that very clear during her interview when she said the following:

[quote style=”boxed”]“Don’t get me wrong — I don’t think Apple is falling off of a cliff. What I do see is Apple struggling to find its post-Steve Jobs identity and vision. Jobs had a unique combination of vision and the power of persuasion that no one else has at Apple.”[/quote]

One of the most important critics of the book is Mr. Cook himself, who spoke about the book on CNBC. He referred to the book as “nonsense” and said that it fails to capture the real essence of Apple and its leadership. In response to these comments, Ms. Kane stated that if he had such an emotional reaction to the book it is because it must have touched a nerve or two.

Is Apple still fresh fruit? Is the new leader going to take Apple to new levels or will the company slide down? Only time will tell what will happen with the company. In the meantime, anyone serious about Apple should read this book to better understand the future of the company.