You are here: Home / Apple Services / Should You Subscribe To Apple News+? Reviewing Apple’s News Subscription

The announcement of Apple One highlighted an interesting pivot point in Apple’s future: It is becoming as much a services company as it is a hardware company. Apple now offers an entire family of subscription services, and I doubt it’s finished expanding its library of options.

One of these services is Apple News+, Apple’s news subscription service. For $9.99/month, you get access to more magazines, publishers, and content in the Apple News app.

But is this price worth it? What do you get when you subscribe? And who is this service for?

In this post, we’ll answer all of these questions and more.

What is Apple News+?

To start things off, let’s get into what Apple News+ is. After all, I think it’s a safe assumption that Apple News is one of Apple’s least-used services, so there’s a good chance that some of you haven’t even heard of it.

Apple News+ is a subscription service that gives you access to pay-to-read content at a bundled price. Rather than having to pay for different publications individually (some of which cost more than $9.99/month on their own) you pay a single price for access to all of them. You can think of it like Netflix for magazines and newspapers.

You can use the Apple News app without paying for Apple News+ and still have access to tons of news stories. Most of the content in the app is free, so this service is geared more towards hardcore news fans.

What you get when you subscribe to Apple News+

At the moment, Apple News+ offers somewhere between two hundred and three hundred publications when you subscribe. The vast majority of these are popular magazines, with a few local and national newspapers sprinkled on top.

For the most part, these are going to be magazines that you save money on by bundling them. So if you only read one or two magazine publications, then you’re better off sticking to a normal magazine subscription. But for those who want to read everything, $9.99 could be a steal.

These stories are narrated by professionals and are picked from trending articles. So you should have access to an audio version of a popular story within a few days of its initial publishing. This feature works with CarPlay and is exclusive to the News+ subscription.

Another feature that’s exclusive to Apple News+ is offline reading. Subscribers can download any article they like to read later so that you stay up to date without an internet connection. It’s a handy feature, though I don’t see it having much use beyond road trips and flights.

On the other hand, I think one of the best features of Apple News+ is access to cover-to-cover magazines. The subscription gives you hundreds of publications to flip through, and the experience isn’t all that much different from holding a magazine in your hands. This is especially true on the iPad.

And some other stuff

Along with these more exciting features, you also get a handful of perks on top. The biggest is family sharing, which allows you to share your News+ subscription with six other family members at no additional charge.

You also get access to “enhanced” local news, which just means it’s easier to find, read, and support articles from your area. 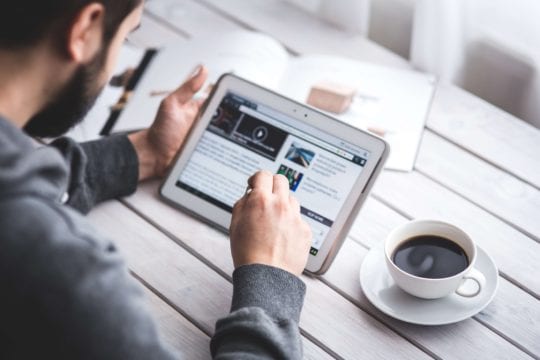 What you DON’T get in Apple News+

Now that we’ve covered everything that comes with Apple News+, it’s time to get into some things that don’t come with the service. Rather than getting nitpicky, I decided to focus on things that new subscribers might assume they’re getting but actually aren’t.

I think this is the feature that most new subscribers will be caught off guard by. You don’t get access to every piece of paid content in the News app – just a lot of it.

Some publications (mostly newspapers) still want you to sign up for an individual subscription for their service. And some sources (like the Wall Street Journal) offer some of their content with Apple News+, but not all of it.

Be sure to check if your favorite publications are included in Apple News+ before you sign up!

Even though Apple News is presented as a uniform service, there’s a surprising amount of variation in the quality, formatting, and overall consistency of the sources you read. That’s because it’s the publishers, not Apple, who are responsible for posting and formatting their content.

When it comes to bigger publications, this isn’t a problem. You’ll find that most of them post digital-first stories that are easy to scroll through across your devices. Smaller publications, however, are less consistent. You’re likely to find that these sources just upload PDFs of their content, which is bearable on iPad and not much else.

This may sound more biting than I mean for it to, but it’s simply the truth: The Apple News app is not the easiest to navigate. This is something that Apple has struggled with in the Podcasts app as well.

Tapping things doesn’t always do what you expect, important features can be difficult to find, and discovering content is trickier than it should be. The service is built around pushing you the latest stories, which makes it harder to find older posts and smaller publications.

I’m sure this will get better with time, but it’s worth noting, especially since Apple’s competitors (like Flipboard) are currently doing a better job at this.

So with all of this in mind, who should subscribe to Apple News+? The answer ultimately comes down to your interests. If you’re an avid magazine reader, then this subscription is a no-brainer. You’ll get access to tons of sources for a fraction of what you’d normally pay, and all of it is digital.

If you’re more of a news person, however, then you might want to take some more time to consider before subscribing. Maybe you won’t get access to the stories you want, your favorite publications might not be on News+ yet, or you simply might not care to read paid content as much you thought you would. I’d recommend signing up and setting a reminder in your phone to cancel in a month so that you can see if it’s something you’ll use.

I’m a firm believer in the future of news subscriptions like the Apple News+ model, but I think this service needs a bit more (or a lower price) for it to be justifiable to the average user.