You are here: Home / iPhone / The Best iPhone Rhythm Games

Like a lot of you, I grew up playing games in the Guitar Hero franchise. Mixing music with gameplay, these games provided hours of fun and satisfying skill-building. If you find yourself missing these games, then we’re going to help you scratch that itch with these iPhone rhythm games.

I’ve become obsessed with these games over the last few weeks, competing with my friends and family to get the highest scores. They’re a lot of fun, easy to pick up and put down, and engage your brain on multiple levels.

Today, we’re going to be covering my favorites in this genre as well as the best iPhone rhythm games you can find.

What are iPhone rhythm games?

Before we get too far into that, though, I wanted to briefly cover what iPhone rhythm games are. After all, you may not be familiar with the genre.

Rhythm games are games that combine music with gameplay. The two are integrated so that you have to listen to the music to keep up with the game. This could mean playing a game like Guitar Hero, where the game and the music are the same. Or it could mean playing a platformer where your jumps, dodges, and dashes are in sync with the music. So you don’t have to listen to the music, but it clues you into what you’re supposed to do.

This creates a super satisfying and challenging experience for the gamer. And though these games have traditionally been locked to PC and consoles, there’s been a recent surge of great rhythm games on iPhone.

The best iPhone rhythm games in 2022

Alright, now that we’ve got an idea of what rhythm games are, it’s time to start listing the best ones out there. These are a mix of personal and fan favorites, so you shouldn’t find it too difficult to find a game (or games) that’s right for you.

First on our list of iPhone rhythm games is Thumper. Thumper was originally a game for PC that made its way onto the iPhone a few years ago. You can buy this game for $4.99 or download it for free if you’re an Apple Arcade subscriber. 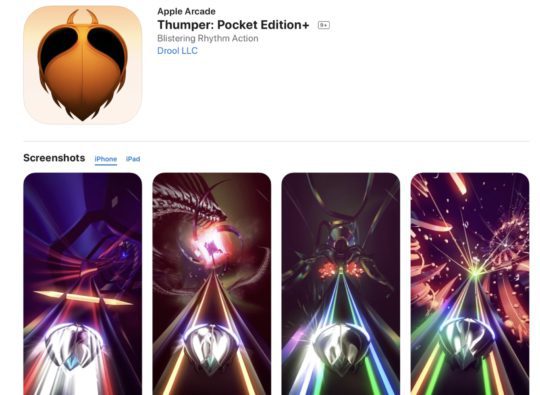 In the game, you play as a robotic-looking bug on a racetrack suspended in space. You glide through the game along this track, racing through and around obstacles, sliding, dodging, and smashing your way to the beat. And occasionally, you fight big amorphous bosses.

If that sounds strange and cool, it’s because it is. This is a very stylized game, almost cyberpunk. It’s neon and dark, and the music is brooding and alien-sounding.

All of this comes together to make an experience that is unique, moody, and thrilling. This is a fast-paced rhythm game. And it throws you right into the thick of it early on. You learn a variety of moves quickly that the game will be combining in unexpected ways. The speed that this game moves at almost makes it akin to a runner mixed with rhythmic elements.

You’ve got to try this one out! It’s one of the must-have iPhone rhythm games in my opinion, and one that I’ve loved working through for weeks.

Next up is Beatstar. This one was introduced to me by one of my friends, and wow, is it a lot of fun. This game is much more analogous to Guitar Hero-style games. It comes with a bunch of popular music for you to choose from and unlock. 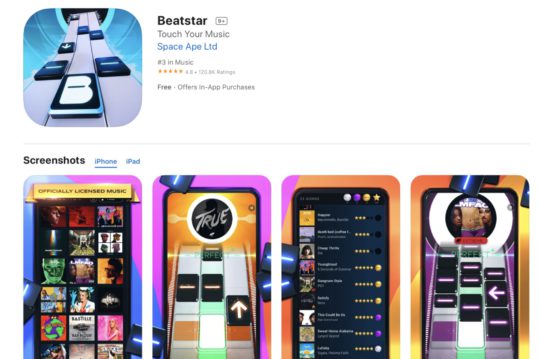 When you do unlock these songs, you get the ability to tap through the song, playing the notes with your thumbs. Again, this is a lot like Guitar Hero. Fans of the GH series will certainly see the inspiration.

While the game gets you started gently, it picks up in challenge pretty quickly. Passing an average song isn’t too hard, but getting a high score (which you need to unlock more songs) is seriously tricky. It requires perfect timing and consistency while you play. And don’t even get me started on the Hard and Extreme difficulty songs. These can seem impossible at first blush and don’t necessarily get easier on later attempts.

Just beware – it’s easy to get addicted to this game!

I am a serious Tetris fan. The amount of hours I’ve sunk into Tetris 99 is a bit too high, as is the amount of time I’ve spent perfecting my T-spins. So of course, I was excited to try Tetris Beat. 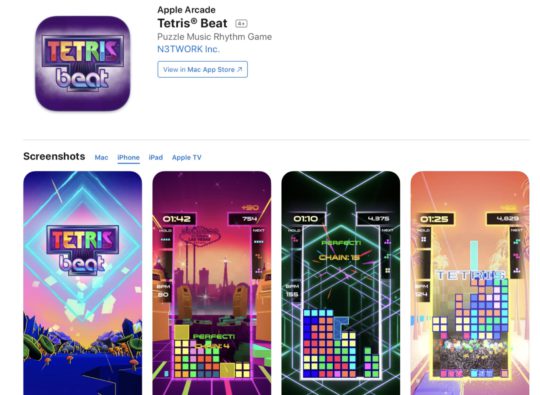 This is an Apple Arcade exclusive that combines music with the classic Tetris game you’re used to. The idea is to place blocks to the beat of the music to raise your score even higher.

At first, I assumed this game would just be using proprietary Tetris music. However, there’s a lot of great “real” music included with this game that you can play with. I’ve actually found some songs I like by playing Tetris Beat, which is not something I expected to get from this game.

The one complaint I have (and it’s not really a complaint) is that this game is pretty difficult. The Tetris part is the same as playing Tetris any other way, but keeping up with the music is a serious challenge. After all, my brain is already focused on enough tasks while playing Tetris. Adding in music does make it a bit complicated.

Even still, I’ve had a lot of fun with this game. I’ve found using the Tap mode (which allows you to quickly tap where you want a piece to go) makes it easier to play. If you like listening to new music and playing Tetris, download this!

Next up is one on our list of iPhone rhythm games is one that caught me by surprise. It’s called Rhythm Journey, and in it, you follow a series of levels that tell a story. Each one features a song whose lyrics narrate the story to you, so as you play through the music the story unfolds.

That might sound a little corny, and it would be if the music in this game didn’t go so hard. Seriously, even the tutorial song is really fun to listen to. Fun enough that I didn’t find myself getting bored after struggling over and over again with the level.

That’s the other thing about Rhythm Journey – it’s not an easy game in the slightest. You’re going to have to give it your all. Though the controls are simple, it throws a lot at you pretty quickly and doesn’t pull punches.

Honestly, this one may end up being my favorite on this list. Seriously, check it out!

For those who like Japanese music and aesthetics, there’s Taiko no Tatsujin Pop Tap Beat. TNTPTB is a lot like that Donkey Kong game with the bongos controller for Game Cube. You can play just two notes, and it’s about precisely drumming along to the song.

Graphics-wise, this is one of the best-looking games on our list of iPhone rhythm games. It’s so cute and colorful. It oozes personality.

And the gameplay is pretty fun too! It wasn’t necessarily my cup of tea (neither was the Donkey Kong game) but for those who are looking for a rhythm game that’s a bit more methodical and precise, and/or you love Japanese music, then TNTPTB provides one of the most unique offerings on this list.

Just know that this one is an Apple Arcade exclusive as well!

That brings us to Beat Swiper. If you’re familiar with rhythm games, then this one is probably going to look familiar to you. That’s because it’s modeled after the beloved Beat Saber, a VR game for PC that combines Guitar Hero with lightsabers. If you happen to not be familiar with it, I would eagerly insist you look up videos of this game on YouTube. 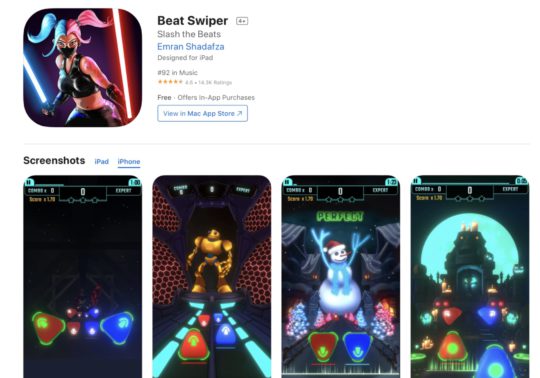 Beat Swiper brings this amazing experience to the iPhone – albeit it’s a bit simpler. Rather than playing in a VR environment, you’re swiping incoming blocks in all directions.

This makes for a serious challenge that’s lots of fun. The one criticism I have of this game is the music selection is a bit limited. But given it’s a pocket edition of a more popular game, it’s one of those “You get what you get” situations.

Magic Tiles 3 is a game most of us are likely familiar with. It’s from the era of Angry Birds and Fruit Ninja, and yet remains a fun game. 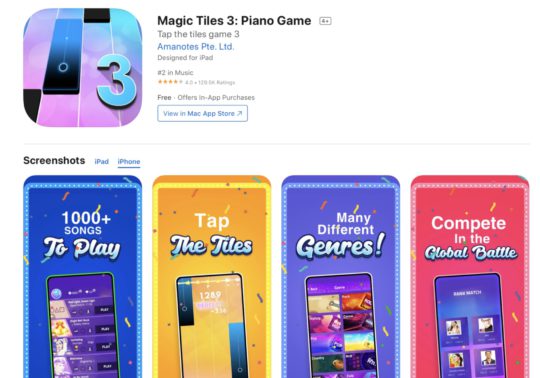 Similar to Beatstar, Magic Tiles 3 has you tapping tiles as they zip towards the bottom of your screen. Tapping them plays the music, making for a relaxing and challenging experience.

Magic Tiles 3 comes with a few different game modes, so if you find one mode too difficult or stressful, you can switch it up for something a little easier. Overall this is a solid classic, even if it’s not as robust as some of the other apps on this list.

The last one of these iPhone rhythm games I wanted to point in your direction is Sayonara Wild Hearts. This is an Apple Arcade exclusive, and it may be the best-looking app on Apple Arcade, if not one of the best iPhone games I’ve ever played.

While it’s not a true rhythm game (you don’t “do” anything to the rhythm) it’s very music-centric. You listen to music while racing through various environments, picking up hearts and following the story as you do so.

The idea behind this game was to create a visual album experience, and I would say it nails this pretty well. Even if I think the visual part is a bit better than the album part. If you have Apple Arcade, check this one out! I played it on my Mac and think seeing it on a bigger screen added a lot to the immersion.

Take the best iPhone rhythm games with you wherever you go

And that’s it! Those are our picks for the best iPhone rhythm games. If I had to pick my favorites, it would have to be Thumper, BeatStar, and Rhythm Journey. Sayonara Wild Hearts gets an honorable mention, too. But even aside from those, I have enjoyed playing all of these and highly recommend you check them out!