You are here: Home / Reviews / Do Third-Party Camera Apps Work On iPhone?

In last month’s “Best Of iOS” article I posted, I included Halide Mark II, one of the most highly-rated third-party camera apps on iPhone. And it got me thinking – are these apps doing anything?

I mean, do these apps allow you to take better photos? Are they just adding filters and pretending that the photos are better than the ones you take with the stock iOS camera app? Or do these apps have something to offer pros?

Let’s get to the bottom of it!

What are third-party camera apps?

First things first, what the heck am I talking about when I say “third-party camera apps”?

When you open your iPhone and swipe left on your Lock Screen, you’re presented with a viewfinder. From here, you can take photos, videos, slo-mo’s, portraits, etc.

This is the built-in camera app that comes with every iPhone and iPad. You can access it from here, the Control Center, and your Home Screen/App Library. For most of us, it’s the only camera app we ever think about using, because, well, why would you use another one?

Some people aren’t happy with this app. Maybe they want more control, don’t like the way their photos are turning out, or just hate the stock iOS camera app’s interface. So they go on the App Store, search “camera apps” and pick a new app that suits their needs better.

These apps on the App Store allow you to take photos with your iPhone’s camera without needing to use the stock Camera app on your iPhone. This is what we’re referring to when discussing third-party camera apps. 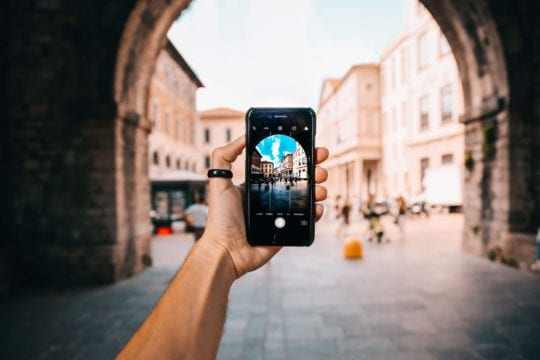 My skepticism over third-party camera apps on iPhone

Not only did I start to question the validity of these apps when researching for my last Best Of post, but I also heard some interesting insights from YouTuber MKBHD in his lengthy “What I REALLY Think of the iPhone!” video. In this video, he mentions that on Android, some “camera” apps don’t even take a photo. They just screenshot the viewfinder. Even Snapchat was guilty of doing this.

It was this that led to me wonder if there are any third-party camera apps on iPhone that actually do anything. Specifically, I wanted answers to these questions:

In short, do these apps work? Or is it just digital snake oil? For the average user, the ~$5 spent probably isn’t a real loss. But if you’re a professional, this kind of information is pretty important.

Yes, third-party camera apps do work. Like any app, though, your mileage will vary depending on the specific app. While looking around, reading reviews and testing, and trying out different apps for myself, it looks like some are doing a good job of increasing your level of control over your photos.

Others seem to just be adding a filter to the camera or making it easier to do things that you can already do with the stock Camera app. Third-party camera apps that just add a filter seem to make that clear for the most part, though. Hipstamatic X, for example, is pretty clear that it isn’t taking “better” photos, per se. It’s just providing a cool photo-taking experience on iPhone.

I did find plenty of apps that offered things like RAW photo exporting, advanced ISO and shutter speed controls, and lots of positive reviews from sources like National Geographic and users.

It’s an Android problem, not an iOS problem

I also found that the issue of crummy third-party camera apps seems to be mostly an Android thing. Snapchat, for example, actually takes photos on iOS; it’s only on Android that it screenshots the viewfinder.

It appears that the reason camera apps are less reliable on Android is that every Android phone uses a different camera. So developing a quality third-party camera app for every Android phone is pretty difficult and costly. Since all iPhones work in more or less the same way, developers only need to create a single version.

Thus, most of these problems are rare on iOS. I’d only be worried about camera apps adding a filter in place of taking a better photograph, but you can probably dodge this by reading reviews and dropping a few bucks on a verified option.

Alright, so now that I’ve done enough research to figure out that most third-party camera apps on iOS do improve your photo-taking experience, let’s get into how.

Now, many of these features are going to vary from app to app. Some will only offer a few, while others offer all, and then there will be a ton that are in between. And you’re likely to find that even if one third-party app doesn’t offer groundbreaking features, it’ll have something else going for it (like unique filters or a great UI).

Now that we’ve covered everything that third-party camera apps do, let’s be clear about what they don’t do.

Specifically, third-party apps can’t improve or alter your iPhone’s camera. If you go into the third-party rabbit hole hoping for an app that will radically transform your iPhone photography experience, you’re probably going to be disappointed.

This is because your iPhone’s camera is a physical object. It can’t be improved (or damaged) by a third-party app. All a third-party app can do is improve/alter the way you interact with that camera.

For this reason, go into this with the mindset of improving your photo-taking experience and the images you shoot. You might be able to take improved photos using tools you can’t do by default. But it won’t be like downloading a “better camera” to your iPhone. After all, that’s impossible – for now, anyway. 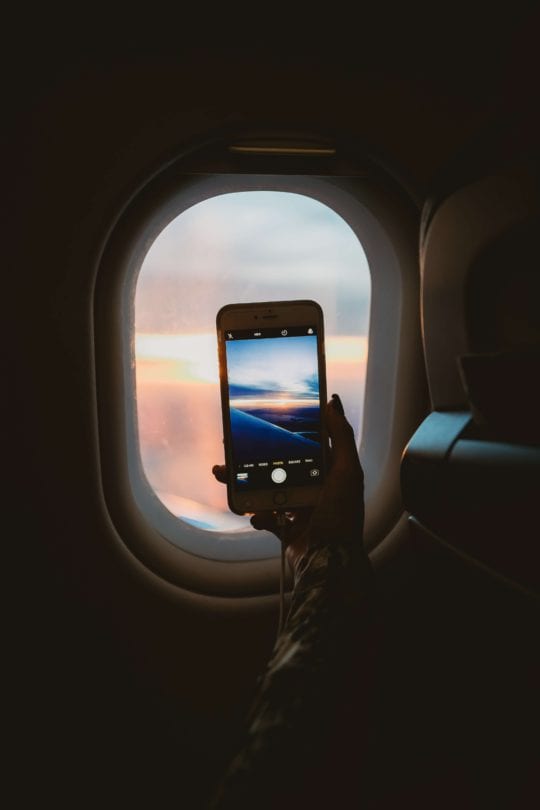 How to find third-party camera apps that actually work

Even though I ended up finding that more third-party camera apps worked, there are still plenty out there that just pretend to improve your photography. Luckily, it’s not too hard to avoid these apps.

First, look for apps that aren’t free. That might sound counterintuitive. If you’re trying to figure out if something works, why pay for it before you know it will work?

I recommend this because, for the most part, paid apps take themselves more seriously. They have a team that cares and is proud enough of the product to charge you for it. That’s a pretty good indication of a quality app. Plus, if people pay for it and end up hating it, you’ll see that reflected in the reviews more often than you will in a free app.

Second, read the reviews! See what people have to say about this app in the App Store, see what people on Reddit and Twitter think about it, look for YouTube reviews if they exist, etc. I would recommend you avoid reading most articles on apps since many of these are paid, though. (This article is not sponsored by any apps).

And third, use your judgment. If an app is charging $2.99, has a crummy icon, middle of the road reviews, has outdated screenshots, and looks campy, then don’t download it! If it looks slick, professional, has positive reviews, and charges $5+, then it’s probably a solid app.

Some great third-party camera apps to try out on iPhone

Alright, now to the last portion of the article, my recommendations for third-party camera apps on iPhone. Keep in mind that I’m not a photographer, though I do have some education in digital media. I’m basing these suggestions on research, reviews, and consensus among professionals.

And I’ll say it one last time: None of these apps has offered me a cent to suggest them. These are honest, unbiased suggestions.

The Halide Mark II app is not only the app I suggested in my Best Apps Of March post, it’s also the reason I decided to write this post in the first place. I wanted to make sure that the claims behind Halide Mark II were valid and not just marketing puff.

I’m happy to report that none of this is the case. Halide Mark II is an excellent app with a passionate team of developers behind it. It offers a unique gesture-based interface that makes shooting faster and more intuitive. It has portrait settings for people and pets. And you can export to formats like RAW, TIFF, HEIC, and JPG.

Halide Mark II also has some pretty cool additions, such as photography lessons, a built-in level for taking more or less straight photos, and anti-tracking features. It not only avoids collecting your data but prevents other apps like Facebook from doing so as well.

Next up is Camera+ 2. This is one of the most popular third-party camera apps on iOS, so I wouldn’t be surprised if you’ve heard of it before.

Unlike Halide Mark II, which is trying to revamp the default Camera experience on iPhone, Camera+ 2 is more like an upgrade to your existing camera. It adds features that build on features iOS already has, includes its own machine learning features (as opposed to Apple’s built-in photography machine learning), and so on.

I’d consider this a “safe” third-party app, if that makes sense. It won’t revolutionize your camera-taking experience. It’s just an overall improvement that pros and casual users will both like – and that’s about all. But sometimes, that’s enough!

I would say that Chromatica Camera is sort of a “lite” version of Halide Mark II. It has similar unique features and creative improvements, just not as many. You’ll get things like object tracking, a new interface, warnings when your exposure is clipping, extra exporting formats, and simulated aperture.

The list of features isn’t too much longer than that, and I don’t think all of the features are going to be knockout improvements for everyone. But for the $2.99, the price is right. And reviews for this are consistently positive.

I’d recommend this one to hobbyists who want to improve their iPhone photography. If you’re a pro, however, this might be a little light on features.

ProCamera is probably the most reputable app on this list. The App Store page for it has endorsements from National Geographic. So that tells you something about how respected this app is.

From everything I can find online about this app, it seems like photographers agree this is the third-party camera app for iPhone. It’s between this or the default Camera app for pros.

This has pretty much all of the features of the other camera apps listed here, give or take. It’s centered around increasing your control over the built-in camera, but it also has some special features included as well.

I’d call this the “iPhone” of iPhone photography apps. It may not have everything that other options have, so it might not be for you. But it’s probably for most people.

What did I learn about third-party camera apps?

I learned that for the most part, on iOS, these apps are the real deal. And if an app is just there to add a cute filter and scam you out of a few bucks, you’ll probably be able to tell before you download it. Especially if you’re a photographer.

I hope that you learned something about these apps as well! Maybe this is the final push you needed to finally dive deep into the world of these apps, or maybe it convinced you that the default Camera app is good enough for you.

Either way, I hope you enjoyed reading this post! For more like it, check out the rest of the AppleToolBox blog, and consider signing up for our newsletter to stay in the loop on everything new.