Apple’s proprietary apps, like Notes, Photos, Reminders, Clock, and more, have felt underwhelming for a long time. It baffles many, seeing as Apple is about providing consumers with sleek functionality and a minimalistic aesthetic. Many were expecting Apple to make significant updates to these apps. While they didn’t update the apps mentioned, they did make tweaks to Safari and Mail, among other apps. Individuals hearing rumors that Apple would update proprietary apps probably thought that the company would make sweeping changes to all of them.

We’ve had the opportunity to download third-party apps to fix the holes left behind by Apple’s shortcomings, and we’ve become used to using certain apps for basic features. The Find app is a third-party app that does what Apple is supposed to do, but better. If you’re looking for a better way to sort and find photos and videos, you’ll appreciate this app. Below we’ll take a deeper look into the app and its creator.

The Photo app hasn’t made many spectacular changes that would warrant an in-depth review over the past few years. Sure, Apple has implemented an edit function and different ways to share and categorize media, but the changes haven’t really seemed relevant. There are better editing apps out there, like Adobe Lightroom or VSCO, and we have various ways to sort through our pictures, one of which is uploading them to a social media platform.

Apple has always had a habit of acquiring or purchasing technology that it could use, and funnily enough, the company might be purchasing the Find app. This is what the creator had to say in a Reddit thread about it:

It’s not profitable at all – I’m actually $300 in debt to Apple for the annual developer membership. But since everything is offline, I don’t need to pay for servers or any other stuff, so I don’t lose much money. And also I’m heading to Apple HQ next week to talk about the app – I’m probably going to be working there soon. Or they’ll acquire Find. We’ll see 🙂

So hopefully, we might be able to see some of the features we talk about below on the official Photos app.

Find App: What Is It? 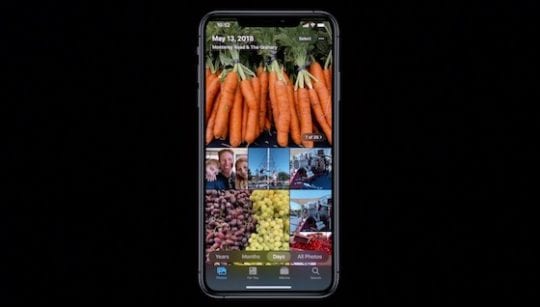 The way the Find app works is extremely simple. You allow the app to access your photos, and you’ll be able to use the application without any restrictions. Some users have reported a slight bug stating that those with over 10,000 images have their app crash immediately. The developer claims to have fixed this in a recent update, so there should be no problems. 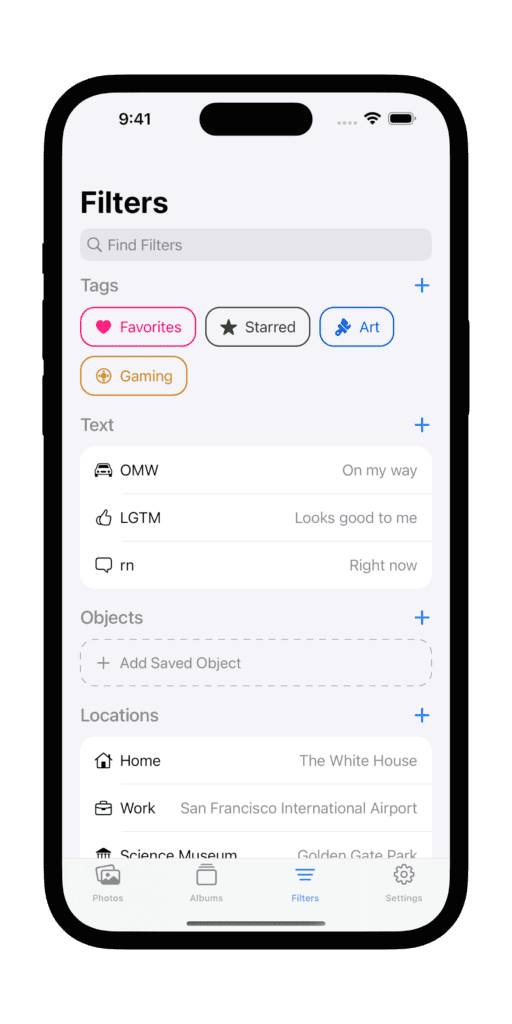 There are multiple filters you can implement to create smart albums. For example, if you want to filter all of your photos based on color, the app allows you to scroll through the color wheel to find what you’re looking for. It will then instantly filter through all your pictures to find one that includes the color you want. And you can do this with multiple factors. You have filters for:

So in the case that you were speaking to a friend about something you saw in a particular location, you could just sort through the location filter. Or, if you were talking about how you saw something with a certain text on it, you could filter by text, too. This makes going through your photos way easier than scrolling through potential thousands and thousands of pictures, videos, and screenshots.

As of right now, you can download the Find app for free on all App Store regions. According to the developer, he’s spent $300 on the Apple Developer membership, but apart from that, it seems as if he’s developed this all himself and with limited resources. It doesn’t have any ads at all, either, so you have a completely unintrusive experience. If what he says is true and Apple has an interest in acquiring Find and implementing its technology into its own Photos app, then hopefully, he gets paid a hefty sum for his work.

Many apps these days have iCloud support, use online data services, and much more to function. The Find app performs entirely offline, which is a breath of fresh air. It can be tiring having apps ask if they can track you and your data, not working offline, and having limited functionality unless you purchase some add-ons.

Why Is Find App Better Than Photos?

Photos has made some small improvements over the years, but nothing that revolutionizes it. We already have specialist apps that can do everything Photos does but better, and we’ve grown used to them by now. The Photos app allows us to categorize photos into different albums, but it’s extremely tedious. There’s no filter or sort feature that helps us out in that department. This is strange, seeing as Apple does have a machine learning algorithm that gives us the album collages and moments feature. So Apple has the ability to harness an algorithm that can filter certain photos. Perhaps that’s why the company is looking to talk with the Find app developer.