You are here: Home / How-to / How to Protect Yourself Against These Common Apple-Related Scams (Checklist Included)

Unfortunately, there are many ways for malicious entities to scam unsuspecting Apple users. Scams and scammers aren’t exclusive to the Apple ecosystem, but they are a concern for users of any platform. This article focusses on the common Apple related scams and provides you with a checklist so that you can be mindful and protect yourself.

Despite the iPhone and Mac’s reputation for being extremely secure, users of Apple’s products can still fall victim to cons and phishing attempts. It might be particularly worrying because Apple users might be lulled into a false sense of invulnerability.

With that in mind, here’s everything you need to know about some of the most common Apple-related scams. And, more importantly, how you can protect yourself against them.

For the most part, Apple-related scams are after two things: your Apple login credentials or your financial information.

Obviously, this information can be dangerous in the wrong hands. Credit card information is a no-brainer, but an attacker with access to your Apple ID can also wreak all types of havoc.

In some cases, scammers will even attempt to steal your social security number or other extremely confidential data.

How Do Apple Related Scams Work

Generally, Apple-related scams will attempt to appear as a form of contact directly from Apple itself. (Though there are exceptions.)

They are mostly sent by email or text, but phone call scammers aren’t unheard of. There are also ways for fraudulent apps and websites to try and scam you, too.

No matter the form they take, they tend to prey on the trust between a user and Apple. Sometimes, they’ll attempt to highlight a nonexistent problem and promise a fix if certain “steps” are followed. In other cases, they’ll instill a sense of urgency to trick a victim into performing a particular task.

While there is a slew of Apple-related scams, many of them rely on the same basic techniques of persuasion. Due to that, the best way to organize these scams is probably to categorize them by the method of delivery.

Once you learn how to recognize common scams targeted at Apple users, you can move on to protecting yourself against them. 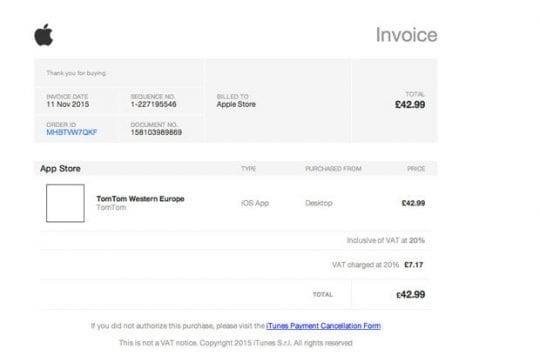 Email is one of the more common avenues in which these entities attempt to deploy their scams.

Email-based scams targeting Apple users can take many forms, and they often try to mimic the appearance or tone of legitimate emails sent from Apple.

Perhaps more worryingly, many of them can appear very realistic. In some cases, the only differentiating factor could be a fraudulent web address — a detail that can be often missed.

This form of scam is so common because many email addresses are publicly listed, whether on a company website or through another outlet.
But emailed scams can come in several forms, so it’s important to know how to recognize them. 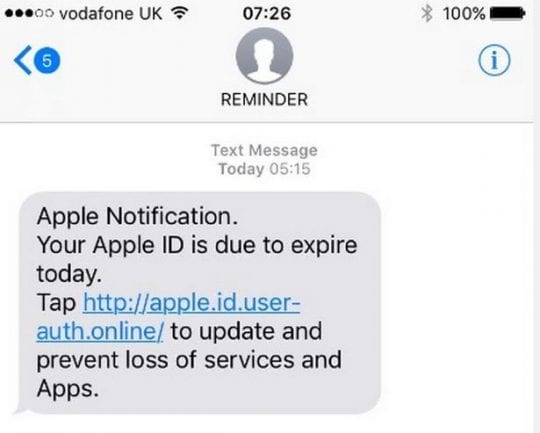 While text message scams are not as common as emailed scams, they can still happen from time to time.

This is especially true if your real phone number is somehow listed publicly on the internet.

Generally, text scams aren’t as easy to fake as emailed scams. Because of the way SMS text messages work, it’s tough to add additional graphics or formatting that might make them appear more credible.

Still, text message scams can be effective, particularly against people who don’t know what to expect as far as genuine Apple contact. Luckily, malicious URLs can’t be hidden underneath an “address title” as they can with emails. Thus, they’re a bit easier to spot.

As with emails, they generally fall into a few different categories. 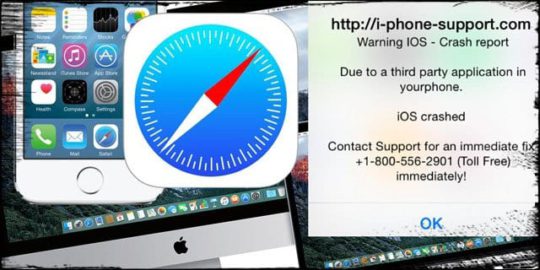 Instead, they’ll often pop up on sketchy or compromised websites. Though that’s not always the case. They can appear even on popular and otherwise legitimate sites. 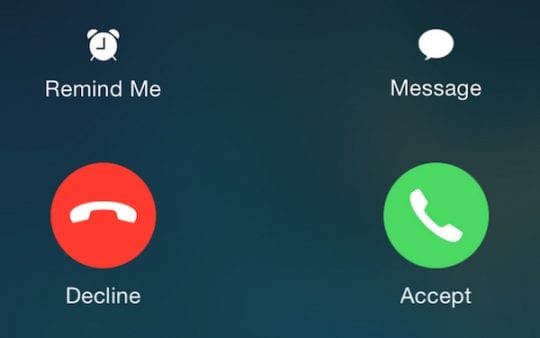 Phone call scams are likely the rarest, but they can also be the most convincing for some. Unlike other scams, the scammer won’t always claim to be an Apple employee.

But the worst part is that it can be hard to identify whether it is a legitimate call or not, particularly if one is not familiar with the contact policies of Apple or other tech support entities.

It’s important to note that, basically, Apple will not give you an unsolicited phone call in regards to your iOS device or your Apple ID.

App-Based Scams on your iDevice 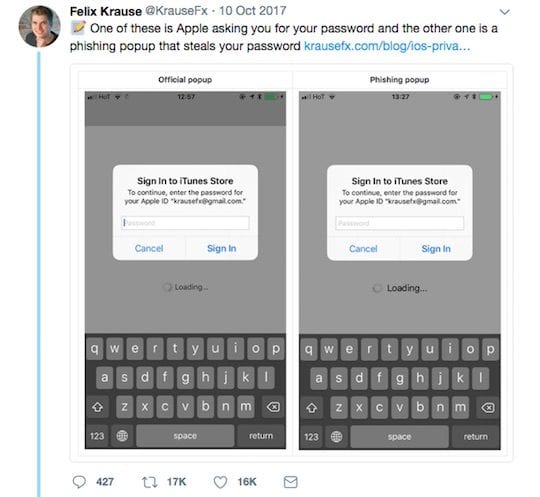 Thanks to Apple’s stringent App Store policies and review process, malicious apps are few and far between on the storefront.

But there are exceptions, and they can be exceedingly deceptive. On that note, here are two that you need to keep an eye out for.

While there aren’t any known cases of this app-based scam in the wild, an app developer created a proof-of-concept exploit that showed off how dangerous they can be.

Basically, the developer created an app that pushed out a pop-up window that looks basically identical to a typical iOS request for your Apple ID password.

As most iPhone users know, iOS can sometimes request your password seemingly at random. And because the fraudulent request is so realistic, it can be basically impossible to tell a fake request from a real one.

The best way to mitigate this threat is to close out of the app. The fake password request can only appear when the malicious app is open.

Because of that, if the request disappears when the app is closed, you can be sure it’s fake.

This is less of a scam that attempts to steal confidential information and more of a snake-oil situation in which a malicious entity dupes users into paying for a useless service. And according to developer Johnny Lin, these types of app scams are on the rise.

Basically, these will appear to be legitimate apps that offer a basic service. You’ll download the app, put in your credit card details, and will be charged for that service.

But the service will often be completely useless for an iOS device. A good example is an antivirus software. iOS devices don’t need antivirus programs, and never will. So you should never pay for one (they don’t do anything anyway).

How to Protect Yourself Against Scammers (A Checklist) 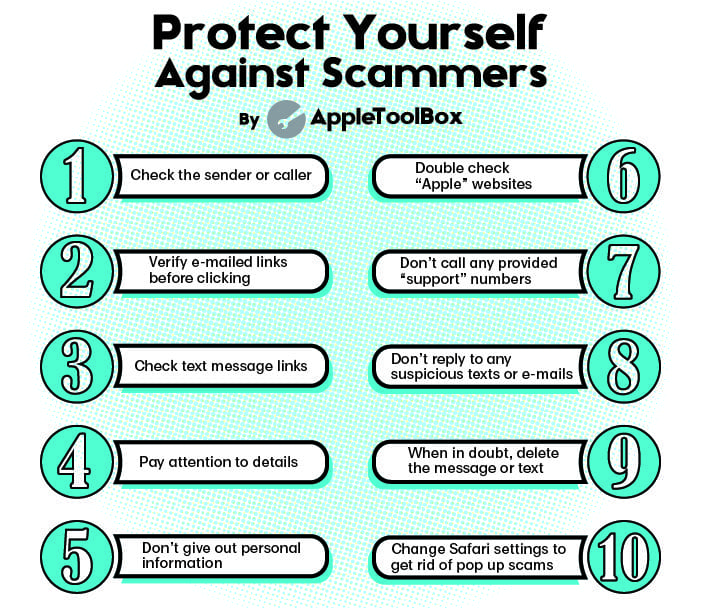 Once you learn how to recognize common Apple-related scams, there are a few important things you should keep in mind. These are the most important steps you can take to protect yourself from any potential threat.

While you may not be able to stop receiving a scam, you can certainly avoid giving out your personal information or

How to Help Stop Scams

Of course, you can go beyond just protecting yourself from scams. Apple recommends you report all suspicious activity, phishing attempts, and online abuse to their Fraud Prevention Team.

If you want to take it a step further, you can also report scams and internet crime to the FBI’s Internet Crime Complaint Center (IC3). Just go to the following website and follow the steps.

While it might be impossible to put an end to scams entirely, reporting specific scams and scammers could help mitigate their spread.