You are here: Home / Mac / The New iMac Pro: What To Expect

In 2020, Apple announced that it would be releasing Apple Silicon, and that by the end of 2022, every Intel Mac in the Mac lineup would be replaced by an Apple Silicon Mac. And today, that goal has almost been reached. All that’s missing is the new iMac Pro.

That’s right – there’s still one more Mac to go before Apple hits the goal it set for itself two years ago. Which raises the question: What is the next iMac Pro going to look like?

While we don’t know for sure, of course, we do have our guesses and predictions. These are based on rumors as well as other releases that Apple has made recently. So in this post, we’re going to put all of this information together and paint the picture you can expect to see when the iMac Pro eventually comes out.

What is the new iMac Pro?

First, for those that may not know, let’s cover what the new iMac Pro is. The iMac Pro is Apple’s high-performance iMac. Just like there is a MacBook Pro, an iPad Pro, and a Mac Pro, there’s an iMac Pro.

The iMac Pro is different from the Mac Pro in that it is an all-in-one machine. The Mac Pro more akin to the Mac mini; it’s a computer without a screen, keyboard, or mouse. Just a box that you plug peripherals into to start computing.

The iMac Pro, on the other hand, comes with everything you need to get started. Just plug it in and start setting it up. If you’ve owned an iMac before, then it’ll be a lot like that, just much more powerful.

When will the new iMac Pro be available?

It’s hard to know exactly when the new iMac Pro will be available. A lot of us expected it to be announced during WWDC22, but unfortunately, that didn’t happen. That means we’ll most likely get the M-Series iMac Pro in the Fall of 2022. I would anticipate late September or mid-October.

While it wouldn’t be unheard of for the iMac Pro to be released later than that, I would consider that an unlikely timeline. If we look at past product releases from Apple, September and October are consistent months for Apple to drop new products.

That said, we can almost assuredly anticipate that Apple will release the new iMac Pro by the end of 2022. Not only because it set out to do so two years ago, but also because it reminded us of this goal earlier this year during a keynote. That means Apple hasn’t forgotten about the iMac Pro and is letting us know.

The new iMac Pro: What we know so far

Now that you have an idea of what the new iMac Pro is and when it will be released, let’s dive into more specifics. Below we’ll be covering what we think this computer might look like, how much RAM it’ll have available, and what kind of ports we’re expecting (and hoping for). So without further ado, let’s get into it!

The design will probably look like the current iMac

The first thing that we anticipate about the new iMac Pro is that the design will likely resemble the current iMac. For those that aren’t familiar with it, the current iMac has a very flat, chunky, and minimal design. Almost like the current iPad Air and Pro models, but big and on a stand.

One of the key differences, though, is that we’re expecting the Pro to have black bezels rather than white. This was a controversial decision that Apple made when it released the new iMac, going for a lighter look. Generally, though, Apple’s Pro devices get darker color palettes, so we anticipate that with the iMac Pro release.

Another change we might see is Apple’s removal of the chin. The iMac’s “chin” is the chunk of metal and glass at the bottom of the display that, seemingly, does nothing. In actuality, this chunk of the iMac is there to house components and ports, although it isn’t technically necessary.

So we may see Apple ditch this chin in favor of a nearly borderless screen, which will certainly excite a lot of Apple fans.

The color options are hard to predict

One of the less exciting announcements around the new iMac Pro is that we can’t be too sure on what colors are available. At one point, we might’ve guessed that it would launch with a similar color palette to the new iMac, filled with vibrant colors.

However, we also expected that from the new MacBook Air that dropped earlier this year, and it turned out to get a relatively bland palette with just a few colors. So it might be that Apple didn’t like how sales went with the multi-colored iMac and is looking to turn things back to its traditional gray, black, gold, and blue color scheme.

To be clear, we aren’t saying that the iMac Pro is going to go one way or the other. Rather, we simply don’t know. For now, it’s up to launch day to fill us in. 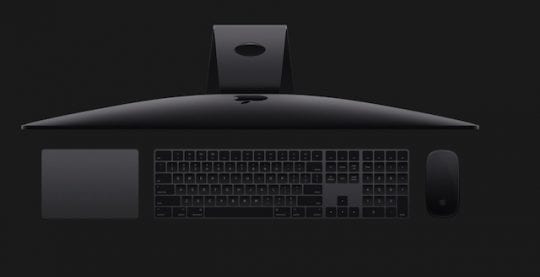 While we don’t know what color the new iMac Pro chassis will be, we can almost assuredly expect an incredible display from Apple. The company has been seriously refining its display technology as of late, especially with releases of mini-LED displays.

Given that the iMac Pro is an all-in-one machine (meaning that it comes with a display) Apple probably isn’t going to release a secondary display to go with it. Instead, it’ll work to include the best display possible so that iMac Pro buyers can enjoy excellent screen tech without needing to spend any extra cash.

That could mean a mini-LED display, 120Hz refresh rate, brighter and more accurate colors than ever before, and some other game-changing display updates. And as mentioned, we might see Apple ditch the chin, which would lead to a bigger screen in the same footprint as the current iMac. Again, we don’t know this for sure, but I certainly wouldn’t rule it out.

Although Apple has been coming out with new versions of its M-Series chips left and right, we still anticipate that more might be on the way. Yep, those who have waited for the new iMac Pro might get a brand-new M-Series chip.

That could be the M3 or yet another variation of the M2. Either way, you can expect to get a level of performance that no other Apple users have seen yet.

There’s also a good chance of this happening due to the iMac Pro being a long-awaited released from Apple. It’s the last Mac to receive an M-Series chip, which may motivate Apple to go all out.

Like most of the mentions in this list, we’re not saying you should plan on the iMac Pro having next-gen chips. We’re just saying to keep an eye out.

Storage and RAM will (hopefully) be generous

With all of the M-Series Pro computers that Apple has been released, there has also come a generous amount of RAM and storage. Even the previous iMac Pro, which launched in 2017, was configurable up to 256GB of RAM and 4TB of storage.

This is great news, as these expensive Macs aren’t the sorts of computers you’re going to want to replace anytime soon. So the more power you can get from them upfront, the longer they’re going to stick around and hold up to your workflow.

Some rumors have suggested that the new iMac Pro will launch with 16GB of RAM and 512GB of storage to start. While this isn’t a bad starting point per se, we would certainly like to see a bit more power from the tech giant. Hopefully, Apple bumps these specs a bit so that customers can save some extra cash.

The jury is out on the ports situation

The last detail users want to know about is, unfortunately, one that we don’t have too much info on. If the design is truly a mirror of the current iMac, then we may see just four USB C ports and a headphone jack.

If Apple wants to give its Pro users more options, though (which we hope it does), then there might be additional ports for SD cards, USB A, and HDMI. That would be great, as it would reduce the amount of migration that users have to participate in.

One thing we can almost be sure of, though, is that Apple will move the ethernet port to the power cable block. This is something Apple chose to do with the 2021 iMac, and it turned out to be a pretty popular decision.

How much will the new iMac Pro cost?

Before closing out this article, I did want to address the big question surrounding the new iMac Pro: How much is it going to cost?

Like everything else in this article, we can’t know for sure until the computer is officially launched by Apple. Some reports have estimated that the iMac Pro will be around $1,700 and $2,000. And for reference, the last iMac Pro started at $4,999, which is much closer to what I anticipate the price to be.

In short, this is going to be a Pro machine, and historically speaking, this is one of the most powerful offerings Apple has released. So expect it to break the bank, and consider yourself lucky if it doesn’t!

The new iMac Pro will be here soon

And that’s it! That’s everything you need to know about the new iMac Pro. The highlights are that it’s likely going to feature a new design, lots of power, and a new M-Series chip. The “lowlights” are that it’s probably going to be extremely costly and only available in a few dull colors. Let me know what you’re hoping for from this machine!