You are here: Home / iPhone / 7 best voice memo and recording apps for iPhone

Recording audio on the fly on iPhone is super handy and can be used in so many ways. Students have the ability to record lectures. Journalists can record source interviews to supplement handwritten notes. Or, a musician can record tracks and ideas while experimenting with sounds. Whatever the reason, there are countless voice memo and recording apps on the App Store for iPhone. Here are some of the best.

Indeed, Apple offers a native Voice Memos app and has since Phone OS 3 was introduced way back in 2009. Over the years, the app has received occasional updates that have added new features and redesigns.

Featuring iCloud support, Voice Memos allows you to capture audio on the go and then use the content later on your other iOS devices, including iPad and Mac. (A native Voice Memos app arrived on Mac with macOS Mojave.) From there you can trim your recordings to save just the portion you want. When editing is complete, you can share your creations through AirDrop, Mail, Messages, and more.

Voice Memos allows recordings from your iPhone’s built-in microphone, Bluetooth headset, or a compatible external microphone. You can choose compressed or uncompressed audio formats, and automatically name and tag recordings based on your location.

The free Voice Memos app by Apple is available for download on the App Store. It comes preinstalled on iOS devices, although you can delete it just as you would any other app.

Perhaps the most beautiful voice recording app in the App Store, Voice Recorder allows you to record and mix selected audio or video files. Better still, it includes the ability to start recording at a scheduled time, which is ideally suited for students that don’t want to forget to record a lecture.

The free app also lets you record and mix the current playing sound, increase the recording volume, record only when speaking, increase the recording volume, and more. You can also password your recordings to protect them from wandering ears. Once your recording is complete, you can convert it into different types of files including MP3, M4A, AAC, MP4, CAF, AIFC, AIFF, WAV, and AMR. You can also save the files through iTunes File Sharing, iCloud Drive, Reminders, Moments, and Calendar.

Voice Recorder (Recording App) includes ads, which tend to become annoying. Once you’re comfortable with using the app, I suggested removing the ads with an in-app purchase. You can download the app in the App Store.

Nearly seven years after it was first released, Voice Record Pro remains one of the most popular professional voice recorders around. The app features a skeuomorphic design that Apple once embraced, but with up-to-date features, you’d come to expect from a voice recording app.

With Voice Record Pro you can record voice memos of any length, then export them into various formats including standard AAC/MP4/M4A, plus WAV. You can also trim and duplicate the records, protect them with a passcode, and more.

Following the pattern of similar apps, Voice Record Pro is available for free with ads. An in-app purchase squashes those forever. Download the app in the App Store here.

Not to be confused with other apps on the list is *Voice Recorder, a simple-to-use solution that includes many unique features, including transcription. Like other solutions, the app features a beautiful, graphical user interface that’s easy to understand immediately. Once complete, you can transfer your recording to other devices and through SMS, Facebook, and Twitter.

*Voice Recorder is a freemium solution that you can try free for three days. From there, you’ll need to make an in-app purchase. 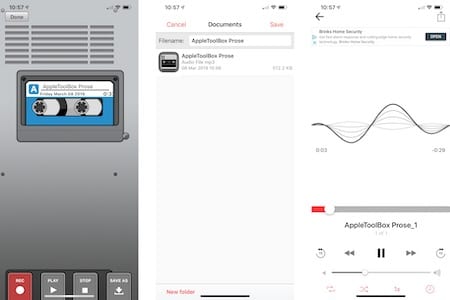 Here’s another memo app that does a great job of recreating the look of physical recorders from the past for iPhone. The freemium app offers unlimited recordings and cloud support through iCloud Drive, Dropbox, Google Drive, OneDrive, Box, and more.

The Voice Recorder & Audio Editor is available to download on the App Store.

For something completely different, consider Multi-Track Song Recorder. As its name suggests, the app is geared specifically towards those who record music. Nonetheless, it also serves as a respectable voice recorder.

With Multi-Track Song Recorder, you can record up to four tracks using a metronome. You can merge your tracks in the same recording session for unlimited possibilities. When completed, export your songs through Dropbox, Email, SMS, and iTunes File Sharing.

With the Upgrade to Pro option (just $0.99), you can remove advertising and unlock more advanced metronome features. Multi-Track Song Recorder is available through the App Store.

The first thing that comes to mind about the popular Evernote service probably isn’t its recording capabilities. Despite this, the feature is excellent and blends perfectly into the rest of the Evernote universe. After creating a note through the Evernote iOS app, click on the microphone icon to create a voice recording; it’s as simple as that. You can dictate notes from Evernote on Apple Watch too.

For a more seamless approach, use the built-in iOS voice dictation tool directly in the Evernote app. You tap the microphone icon on the keyboard (it’s located near the space bar) and then speak into the microphone. From there, your voice converts into text right into your note.

Evernote is a free service, although you’ll need to purchase a subscription to unlock advanced features including more cloud storage space, quick search, and annotated PDFs. A premium subscription is not necessary to use the voice recording feature, however.

If you’re a casual voice recorder, I’d suggest sticking with Apple’s native app, which provides basic recording, editing, and sharing capabilities. For extra features, consider the Voice Recorder (Recording App). The other apps on this list are also great and come with their own set of regular and advanced features. Because each of these apps is free to try, you have nothing to lose with checking out all seven solutions.

Which voice memo app do you use on the iPhone? Let us know below.