You are here: Home / iPhone / iOS 12 Voice Memos Overhauled with New Features — Here’s How to Use Them

Having trouble with iOS 12 Voice Memos App? If so, you are not alone. We see a lot of reports from folks having issues with Apple’s Voice Memo redesign.

Voice Memos first debuted in iOS 3, back in 2009. Since then, the core application hasn’t really seen a significant update.

There have been a few changes here and there, but nothing groundbreaking. That is, until iOS 12.

The voice recording app is getting its most significant update since its launch in the latest version of Apple’s mobile operating system.

This rename issue was a big handicap for some users in the prior iOS. You should definitely update your iOS in order to take advantage of these new bug fixes.

Don’t worry — Voice Memos is still extremely easy to use for those quick audio recordings.

Basically, you open the app, hit the big red button at the bottom. Then, you hit the red square to finish recording.

A few extra tips for voice memos in iOS

On a side note, Voice Memos will add a generic file name by default, or if you have Location-Based Naming toggled on, voice memos automatically adds the current street address to the recording.

In iOS 12+, you don’t have to stop at creating a simple voice recording. You’ll have some extra options to allow for more complicated audio clips.

Swiping up on the recording interface (where the red record button is) brings up additional options.

A “light” swipe up reveals the name of the recording file, a timer, and an audio waveform. 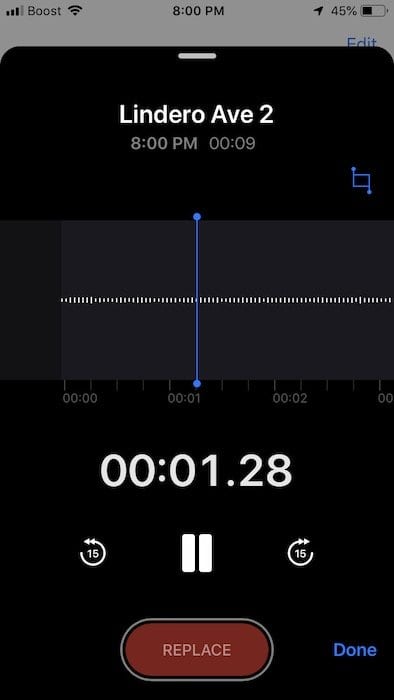 But swiping up this black interface to the top of the screen enables some other options, which we’ll get to below:

You should note that recording over audio in Voice Memos is irreversible. In any case, tap Done when you’re finished.

How to Edit a Voice Memo

iOS 12+ also adds at least two (but maybe three) simple but powerful ways of editing the audio you record in Voice Memos: Replace and Trim. 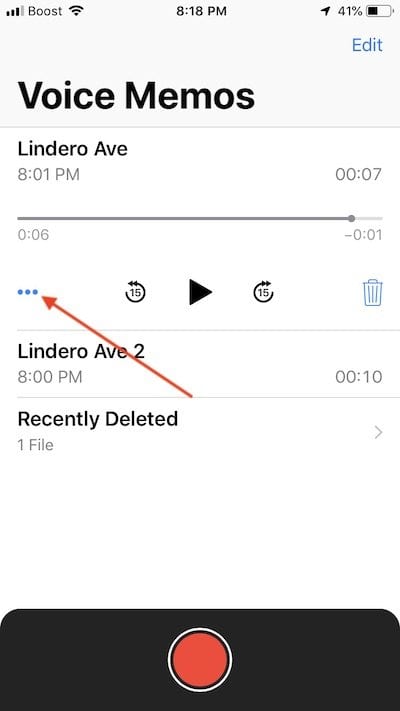 From here, you’ll be brought to the familiar waveform screen. This is where you can edit previously recorded Voice Memos.

How to Replace Audio in Voice Memos

As we mentioned earlier, you can use the Replace button to make a new recording over existing audio.

This is particularly handy if you need to make a note before an important conversation, or you’re recording a song and would like to correct any notes

Just make sure to scrub back to the start of your new audio to check how it sounds. When you’re finished, hit Save Changes.

How to Trim or Delete a Voice Memo

In addition to replacing existing audio or inserting new audio, you can also delete sections of audio or trim a recording. Trim and Delete are separate functions, which we’ll get into.

This is useful for removing personal or sensitive information from recordings, or if there’s only one part of a Voice Memo you’d like to save

When you’re done selecting a portion of audio, you’ll have two opposite buttons — Trim and Delete

How to Insert Audio into a Voice Memo

Unlike Replace, Insert doesn’t record over the existing audio. Instead, it puts adds a new recording into the audio file.

Unfortunately, Insert is not available on all devices. But if your device does support it, you’ll see it as an extra option next to the Crop/Trim tool

When you’re finished, hit Save Changes.

If you navigate to Settings > Voice Memos, you’ll find some additional options.

When you start a Voice Memo recording on your iDevice, it can use the Location to name the file. This is due to how the default settings work.

To change this behavior, you can go to Settings > Voice Memos and turn off Location-based naming.

Renaming a voice memo is not very straightforward.

There isn’t a rename option for voice memos. Interestingly, the rename option exists for PDF’s that you store in the new Books App. This is a consistency issue on iOS 12. 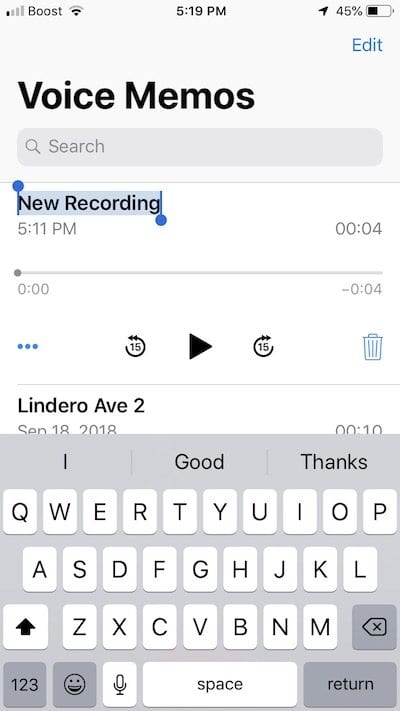 When you delete a voice memo, it should immediately show up in the Recently Deleted folder. This folder is only accessible (visible) when there are items that have been deleted. 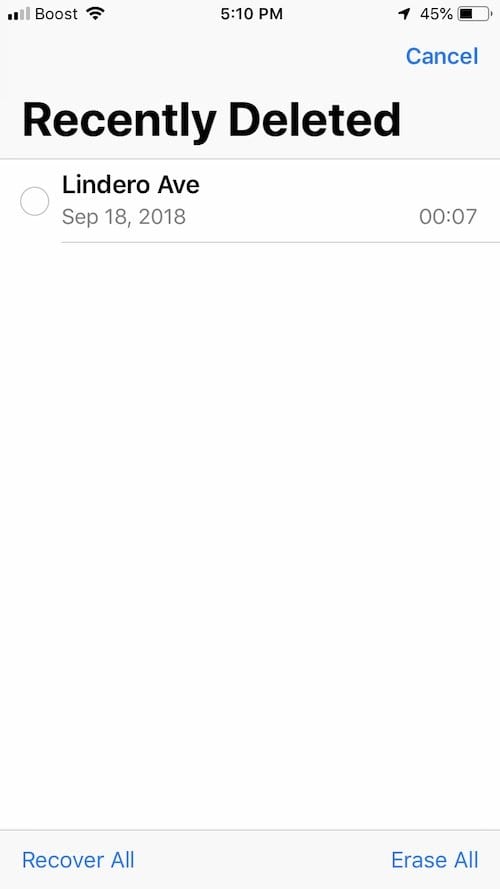 Once here, you can use Recover all to recover the memos or permanently delete them by choosing Erase All.

An important item to keep in mind is in the Settings for Voice Memos. If you tap on Settings > Voice Memos > Clear Deleted, you will find that there are a few options here.

If you choose ‘immediately’ as the option, you will never find the Recently Deleted items folder when you work in the app. Make sure to select the appropriate setting for the retention period for your deleted voice memos here.

After updating to iOS 12, many users have found that their Voice memos do not sync across all their devices. You create a memo on your iPhone, and it takes forever to show up on your Mac or iPad or doesn’t show up at all. This is probably a kink that Apple is trying to fix and will release a new iOS upgrade that will address this.

In the meantime, we suggest that you can use a workaround by using the native Files app in iOS 12.

Once you have edited and saved your voice memo on your iPhone, Tap on the share button and choose ‘Files’ from the option. Once you have saved the voice memo with Files, these are moved automatically into your iCloud drive.

Please do remember that the syncing across the devices of the files does take some time.

Unfortunately, quite a few folks tell us that their voice memos are not being saved after recording. Pressing the Done button doesn’t seem to work. Instead, the Done button directs you back to the Voice Memo main page and doesn’t show the recording you just made. Frustrating indeed!!

This problem is causing a lot of stress as important recording are lost and cannot be retrieved.

Suggestions When Voice Memos Does Not Save Your Recordings

We hope that you found the Voice memo tips for iOS 12 helpful. Please let us know in the comments below if you have any questions or concerns.