Not too long ago, Apple unveiled the new Apple Watch Series 8. And with this release, it dropped last year’s Series 7 watch from its website. This means that, for those who already own the Series 7, there is an important question to ask yourself: Is it worth to upgrade when comparing the Series 7 vs Series 8?

In other words, if you already have a Series 7, should you now replace it with the Series 8? That’s what we’re going to be answering in this article.

For those who currently have an Apple Watch 6 or earlier, this article may be of some use. But it’s worth noting that we’re solely going to be focusing on the differences between the Series 7 vs Series 8.

With that out of the way, let’s dive in.

Apple Watch Series 7 vs Series 8: What are the key differences?

Before diving into who should and shouldn’t upgrade, let’s kick things off by looking at the specific differences between these devices. There aren’t too many, so let’s look at them briefly.

The Series 8 has an improved processor

The first and perhaps most important difference between these devices is that the Series 8 has an improved processor. It features the S8 chip, while the Series 7 uses the S7.

If that sounds like a pretty small difference, it’s because it is. For the most part, that just means that, in the Series 7 vs Series 8, the Series 8 is going to age a little better. It’ll respond better to updates, remain snappy for longer, and just overall be a bit faster.

Still, this difference is pretty negligible, especially considering that the Apple Watch Series 7 is only a year old. That means that there probably isn’t going to be a huge performance bump, so it’s unlikely that most users are going to notice the upgrade. It’s still an important upgrade, but not a game-changing one.

The Series 7 vs Series 8 come in different colors

An important visual difference to consider in the Series 7 vs Series 8 conversation is that these devices (kind of) come in different colors. I say “kind of”, because the Series 8 has all of the same colors as the Series 7 except for three.

Actually, the Series 7 has more colors than the Series 8, making this the one point that goes to the Series 7’s favor. Those who grabbed the Series 7 when it was still available were able to get Blue, Green, and Titanium in addition to the seven other colors that were available with that generation of Apple Watch. That’s ten colors total.

The Series 8, on the other hand, only offers seven colors, missing those three we just mentioned. While a bummer, this is pretty in line with other moves from Apple lately, as they’ve been cutting back on color options with a lot of their devices. The new MacBook Air, for instance, was expected to come in as many colors as the recent colorful iMac, but it instead just featured one new color. 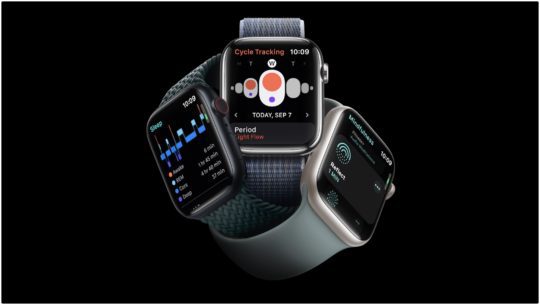 The Series 7 doesn’t have a temperature sensor

Another important consideration to factor into the Series 7 vs Series 8 conversation is that the Series 7 doesn’t have a temperature sensor. This is new to the Series 8, so if you want this feature you’re going to need to grab the Series 8 or later.

For those that don’t know, the new temperature sensor does exactly as it sounds – it tracks your body’s temperature through your wrist. It is supposed to be accurate up to 0.1 degrees Celsius, which is pretty precise. According to testing from The NY Times, the average thermometer is around 0.4 degrees accurate, so the new Apple Watch is a bit better than that.

This feature is not only useful for checking your temperature when you’re sick (or getting a notification on your temperature before you even know you’re sick), but it can also help with tracking your ovulation cycle. So Apple has put some real thought into making this a useful and accurate feature.

Upgrading to the Series 8 will give you crash detection

I will say that while I personally consider this to be a minor perk, there are already plenty of stories online from users who were able to receive emergency services faster thanks to this feature. So it can offer security and does work relatively accurately.

That said, there have also been reports that this feature can be triggered by activities like riding a rollercoaster, so you will need to keep an eye on your Apple Watch when engaging in car-crash-eque pursuits. That is, assuming you decide to upgrade.

Normally, we wouldn’t bother covering a difference so minor. However, the Apple Watch is a device that heavily relies on Bluetooth. It’s essentially connected via Bluetooth 24/7, so any improvement in this area is worth mentioning.

That said, don’t expect to seriously notice this improvement. It’s just a nice quality of life bump from Apple, nothing more, nothing less. 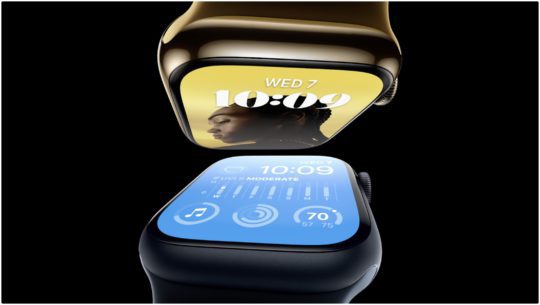 Apple Watch Series 7 vs Series 8: Who should upgrade?

Alright, now that you have an idea of the key differences between the Series 7 vs Series 8, let’s get into who should actually upgrade. Because, let’s face it, most of these improvements aren’t worth upgrading for the average user. So here are a few questions to ask yourself before ditching your Apple Watch Series 7.

First, are you interested in the new temperature detection feature? I’ll be the first to admit that this is a pretty handy feature. It’s also one that seems like it should have been a part of the Apple Watch for far longer. But either way, it’s here now.

This is a feature that I can see just about everyone getting some use out of. After all, most of us are probably sick at least once or twice each year. So having a thermometer attached to our wrist would be a great way to keep track of our health.

On the other hand, if you’re reasonably fit and in good shape, then you might not find yourself using this feature too much. So it could end up being nice, but not necessary.

If you have an ovulation cycle, though, then you’ll probably end up getting more mileage from this feature. It’ll help you track your cycles, which can be handy for a variety of reasons. So if you’re in this camp, then I’d say you have a bit more reason to make the upgrade.

Is having the latest tech an absolute must?

The next point to consider when deciding between the Series 7 vs Series 8 is how much you personally care about having the latest tech. Are you someone who upgrades every year, constantly looking for the best of the best?

If so, then you probably don’t need me to push you to go ahead and make this upgrade. Personally, I do not believe there is much of a reason to upgrade to the Series 8 from the Series 7. Unless, though, you’re someone who just has to upgrade.

For the other users who are just excited for the Series 8 but are unsure of upgrading, this year is probably not the year to pull that trigger.

Otherwise, stick with the Series 7

Which brings me to my final point on the Series 7 vs Series 8 conversation, and that’s that I think most of us should stick with the Series 7. It has nearly every single feature that the Series 8 has. Apple just didn’t put enough into the Series 8 this year to make it a compelling upgrade for Series 7 users.

If your budget is a bit tight and you don’t have any reason to upgrade (i.e., your Apple Watch isn’t broken or damaged) go ahead and stick with the Series 7.

What about the Apple Watch Ultra?

Alright, there is one more thing I wanted to cover in this post, and that’s the Apple Watch Ultra. This is a brand new Apple Watch offering, and as such, I’m sure a lot of readers are wondering if it’s worth grabbing the Ultra.

Here’s my take: It’s kind of worth it, for certain users. 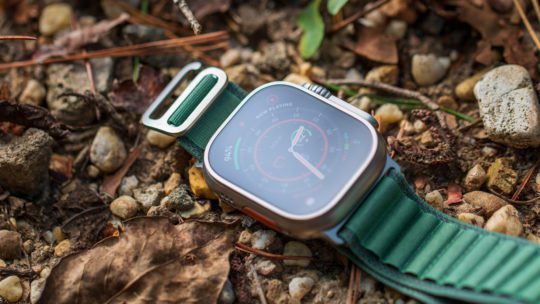 The Apple Watch Ultra is a rugged, all-terrain device, designed to hold up to a lot of abuse. So that means bicyclers, hikers, football players, basketball players, swimmers – those who are frequently in situations where their Apple Watch risks being broken or damaged by the elements.

For those people, the Apple Watch Ultra is certainly a great upgrade, regardless of whether you have the Series 7 or older. Go ahead and make that purchase, assuming you have the budget.

But for those who just use their Apple Watch casually, going to the gym and tracking their daily activity, then no, it’s probably not worth upgrading to the Apple Watch Ultra. It’ll be expensive overkill that you likely don’t need.

Apple Watch Series 7 vs Series 8: For most, the answer is the Series 7

And that’s it! Those are all of my thoughts on the Apple Watch Series 7 vs Series 8 conversation. To sum it up, no, I don’t think most users should upgrade. There just isn’t a lot to this upgrade, sadly. The Apple Watch Ultra is another story, though I still think the average Series 7 user should stick with what they have.