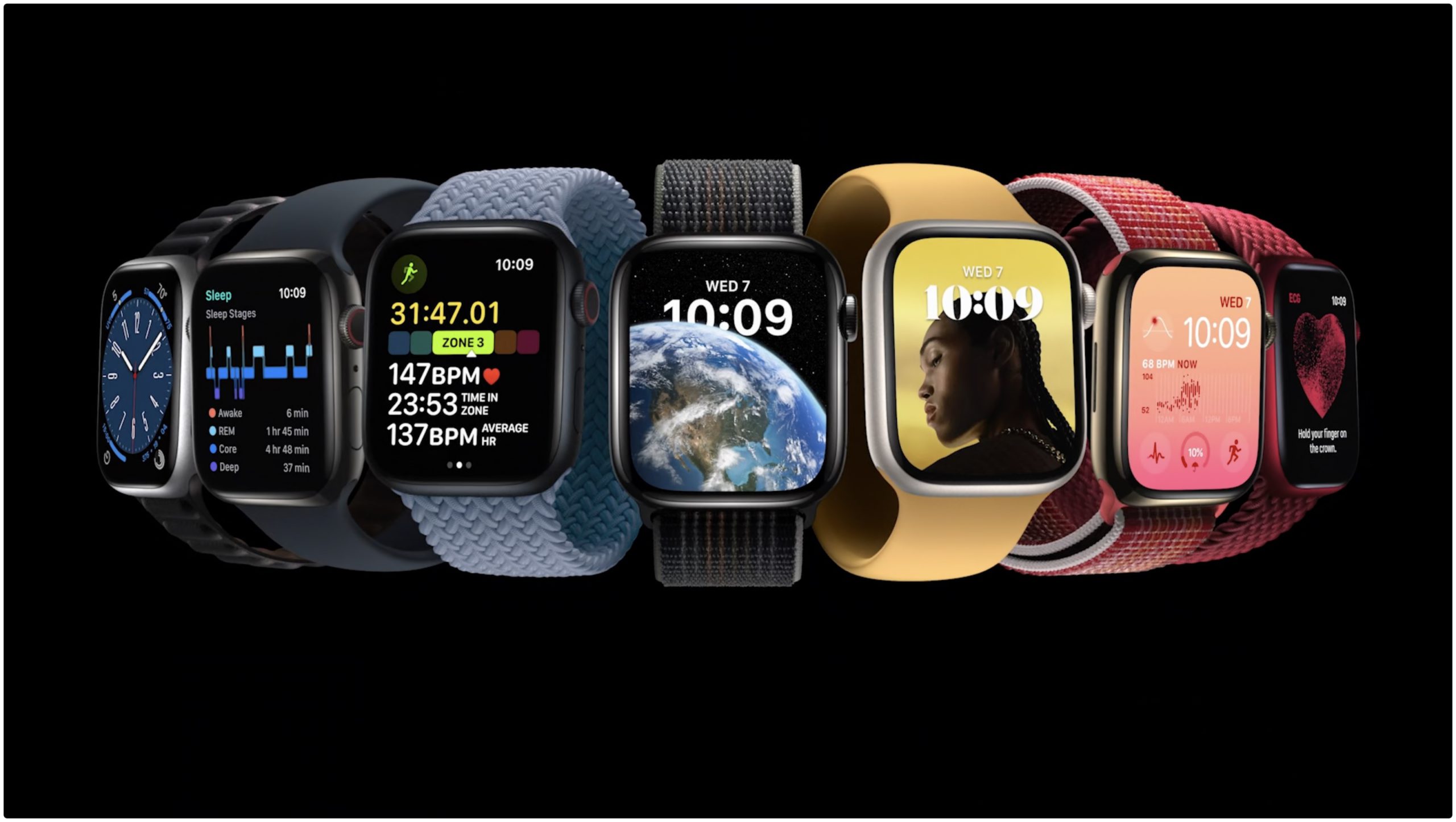 The Apple Watch Series 8 was first up in today’s announcements, as this is being touted as the “most popular smartwatch in the world”. Those are some pretty serious claims given the multitude of choices from the likes of Samsung, Fitbit, Garmin, and others.

With the Series 8, you’ll be able to get this new smartwatch in either 41mm or 45mm, keeping with the changes introduced with last year’s Series 7. As expected, the Series 8 is swimproof (up to 50mm) and also sports an IP6X dust resistance rating. So you’ll be able to go for a swim, take a hike, or just get some work done around the house without worrying about unwanted debris mucking up your watch.

When it comes to health and fitness tracking, the Series 8 continues to be capable of tracking your heart rate, monitor your blood oxygen (SpO2) levels, and even detect irregular heart rhythms (through AFiB). But for the first time on an Apple Watch, the Series 8 introduces an all-new temperature sensor. In fact, there are actually two temperature sensors found on the watch, with one found right beneath the display and another built into the sensor cluster on the underside. 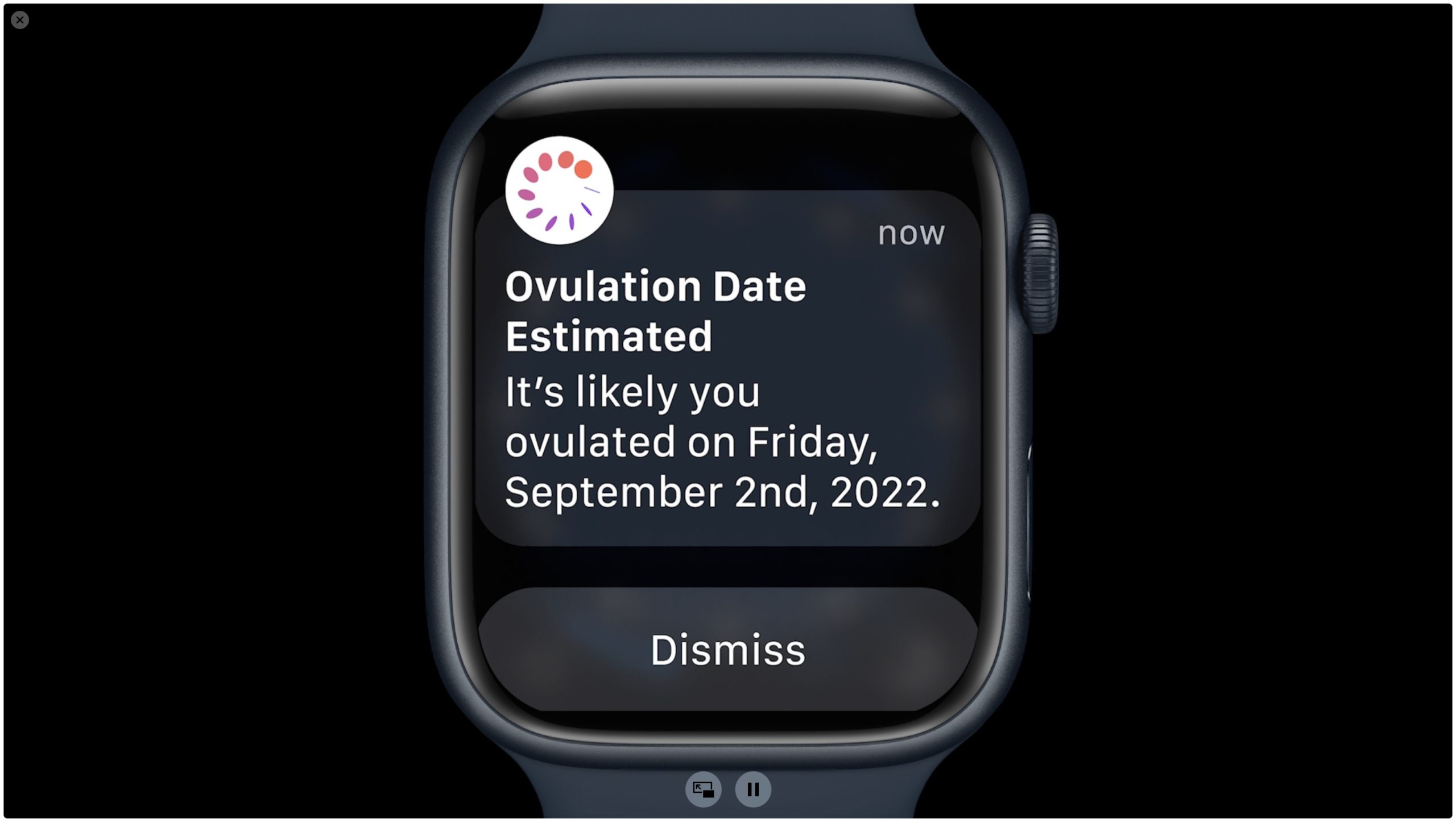 Another incredible addition coming to the Series 8 is the all-new crash detection and emergency services. Thanks to the addition of a “High-g accelerometer” and improved gyroscope, the watch is capable of measuring up to 256g of force. And if you are in an accident, you’ll be able provided with prompts to contact emergency services along with emergency contacts.

As for battery life, Apple hasn’t made any major improvements to the built-in battery. It’s still rated for up to 18 hours on a single charge. But where the difference comes in is with the introduction of the all-new Low Power Mode for the Apple Watch. With this enabled, Apple claims you’ll be able to get up to 36 hours of battery life, but we’ll have to wait and see if these claims are legitimate. 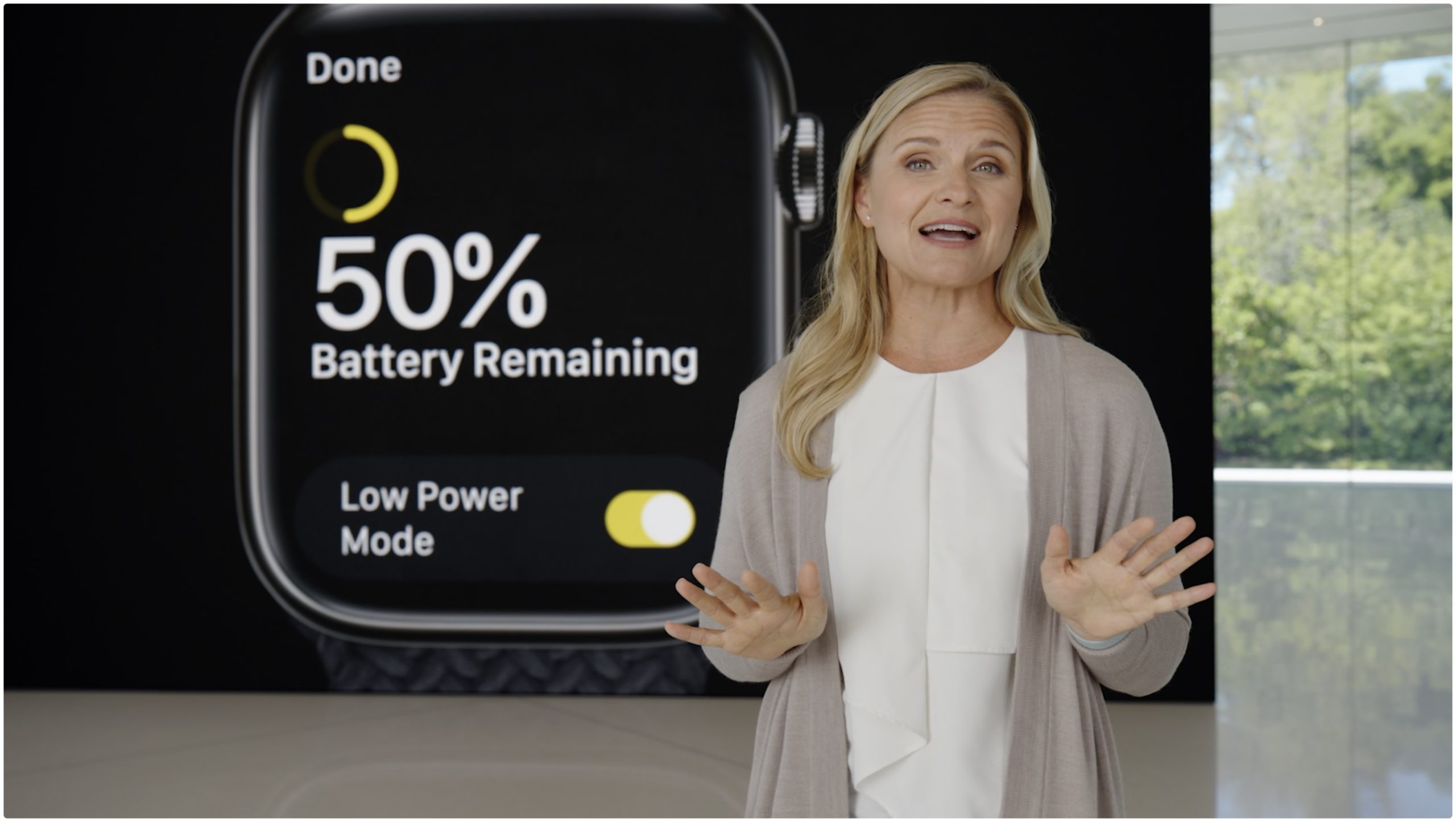 Additionally, you won’t need to upgrade to an Apple Watch Series 8 in order to enjoy Low Power Mode. Apple confirmed during its event that Low Power Mode will arrive on every model between the Series 4 and the Series 7 when the update to watchOS 9 arrives. 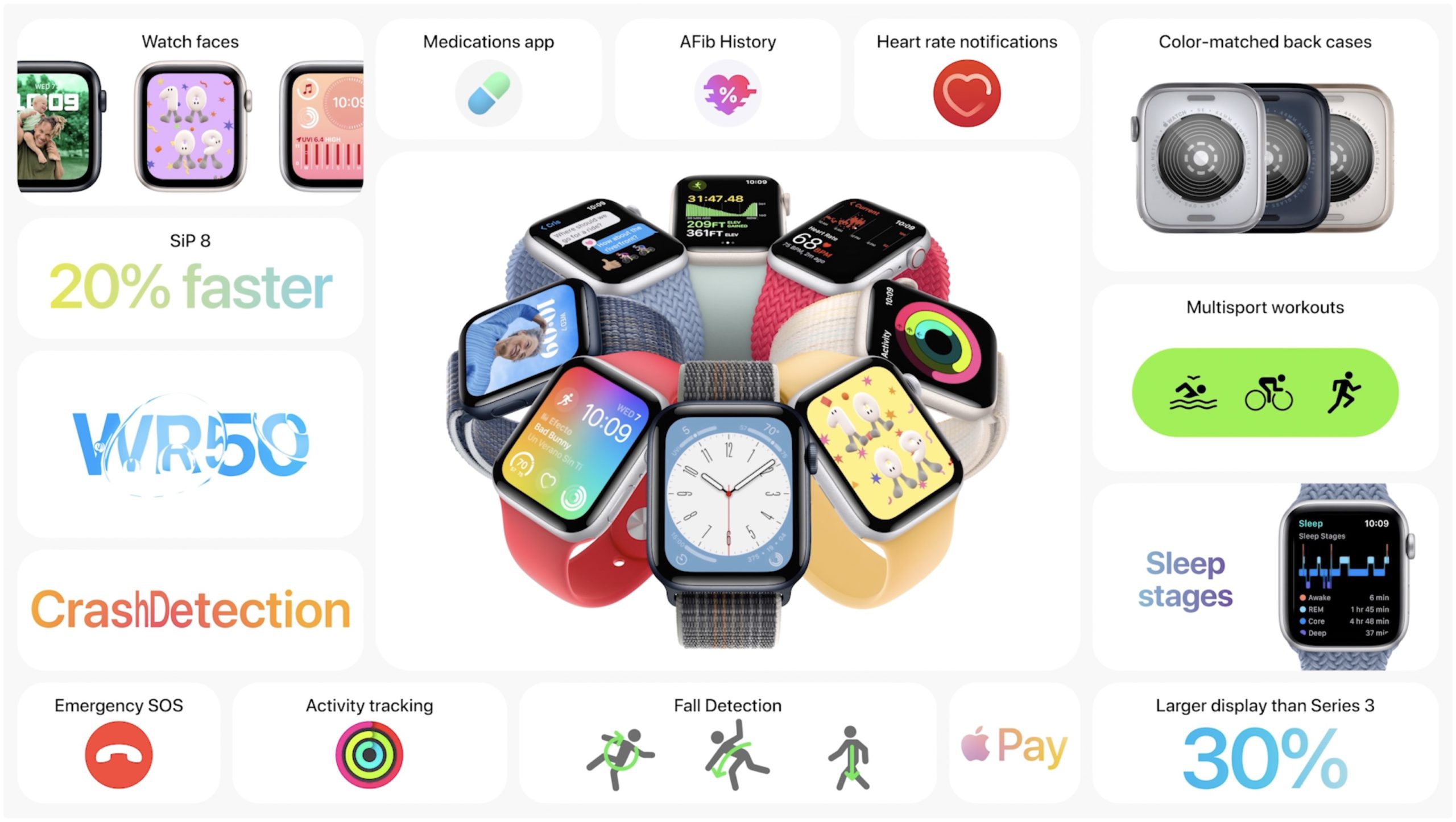 When watchOS 9 was announced at WWDC ’22, it all but confirmed that the Apple Watch SE and Series 3 would be eventually removed from the lineup. This makes plenty of sense given how long they have been available for, but it also ditched any notion of a low-cost Apple Watch. Those concerns were rectified with the introduction of the “new” Apple Watch SE.

Essentially, this appears to be a modified version of the Apple Watch Series 6, as it’s available with either a 40mm or 44mm case size. As expected, you won’t have an Always-On Display, but the Retina Screen can reach up to 1,000 nits of peak brightness. Apple also confirmed that the display being used on the SE is 30% larger than the Series 3, and thanks to the updated chip, it will provide 20% faster performance. 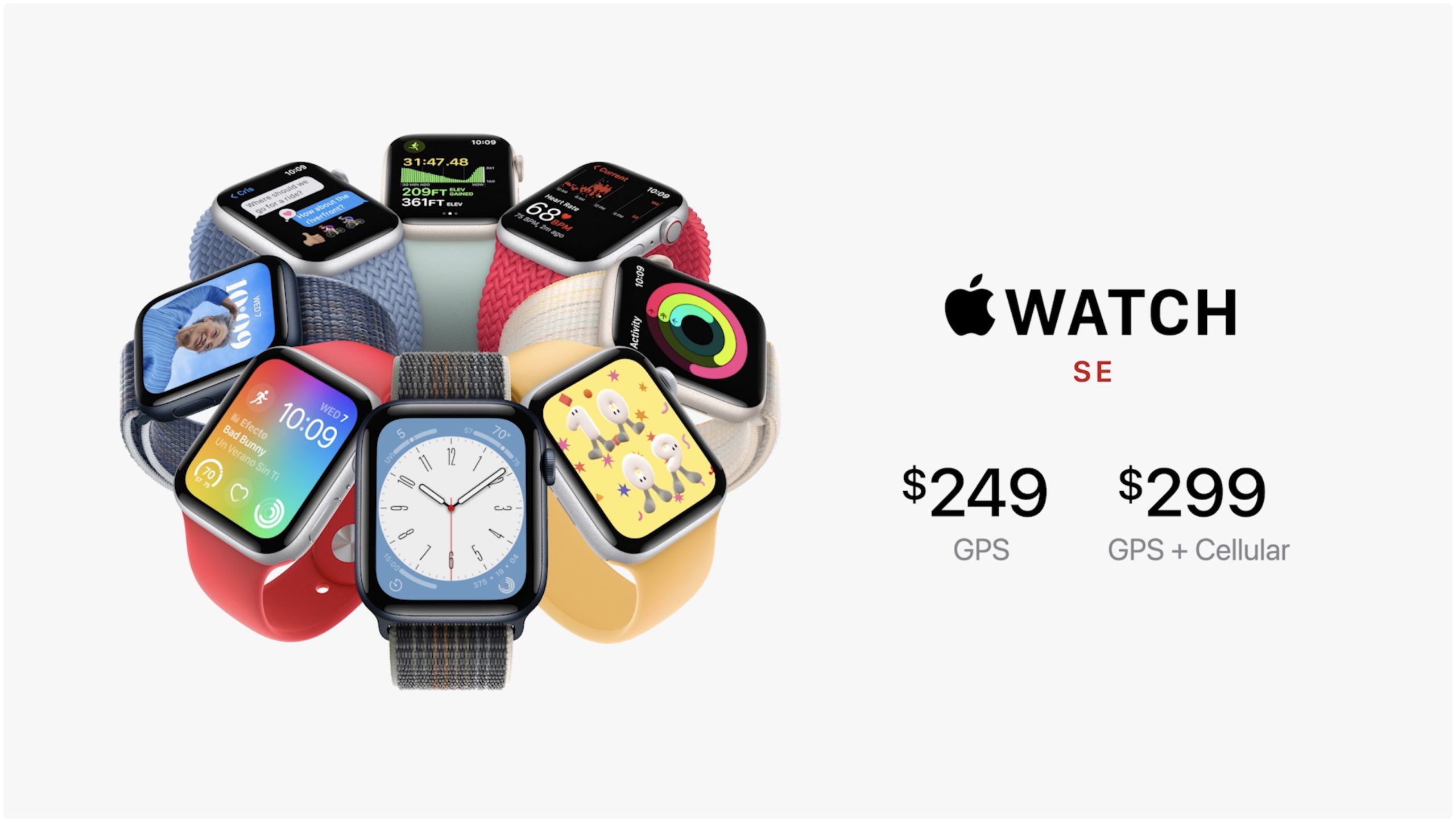 With the exception of temperature sensing and ECG, the Watch SE will be able to keep track of your important health and fitness metrics. This includes cycle tracking, heart rate notifications, irregular rhythm notifications, and more. The Watch SE is also getting the new Crash Detection features that were detailed with the Series 8.

The Apple Watch SE (2022) comes in three different colors with Midnight, Starlight, and Silver. Unlike the Series 8, you’ll only be able to get this with an aluminum casing, and pricing starts at $249 for the GPS-only model. If you want GPS+Cellular, then you’ll be looking at a retail price of $299. Pre-orders for the Apple Watch SE are available starting today, with the Watch SE hitting storefronts on September 16.