You are here: Home / Reviews / EnsenaSoft answers all your Mahjong Deluxe 3 Go questions! 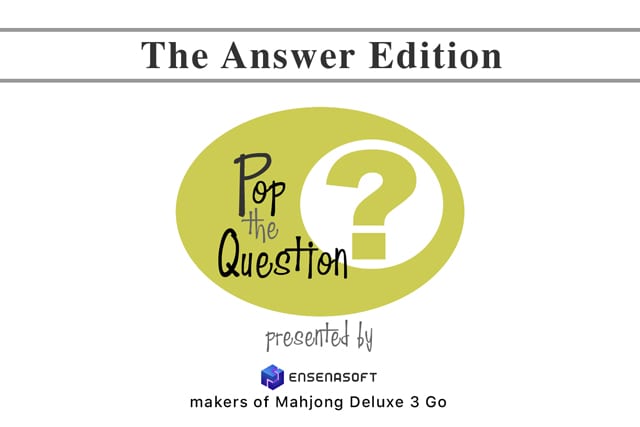 Have a stupid question? Great! That’s our specialty! We believe that any question is a good question. If you’re thinking it, someone else probably is too! So help out your fellow readers and pop all your questions directly to the source!

This week, game developer EnsenaSoft answers all your submitted Pop the Questions about playing the iOS and iPadOS game Mahjong Deluxe 3 Go.

1. Does the game sync between iPhone and iPad. If I play on iPhone does it carry over my scores when I switch it on my iPad?

The game does not currently sync the scores between devices.

2. How do I turn the music and sound effects on or off? Is there a settings menu?

While you are playing the game, you can open the pause menu. There you can turn off the countdown score, music and sound individually using those buttons. Once off, they stay off (even between sessions) until turned back on.

3. How can I listen to my own music while playing the game instead of the game’s music and sound effects?

If you turn the music off in the pause menu (see above screenshot) while playing the game and have your own music playing, it will keep playing. You can separately turn off the sounds or leave them on as desired.

4. What makes this edition of Mahjong “deluxe” compared to a standard game?

The “Deluxe” is part of EnsenaSoft title. We feel it is deluxe by the large variety of puzzles we have and our randomizing tile layout engine so you can play each puzzle over and over again with it never being the same.

On the iPad, you will notice the tiles are larger than the iPhone. The iPad tiles are the size we intended.  On the iPhone version, we actually stretch the tile widths so they are easier to see and select.  We turned that stretching feature off in a version and got many user requests to leave them stretched on iPhone for better visibility.

Yes. The payment is once per your Apple ID account and you can use it on multiple devices and as you get new devices in the future.

You may need to click the option to Remove Ads on the new device, but then it will detect your prior purchase and offer to restore that for free. So you only pay the fee once.

1. Does Mahjong Deluxe 3 follow American or Chinese rules? What is the difference between Chinese and American Mahjong?

In China, there is also a mahjong game that is played by 4 players. Mahjong Deluxe 3 Go is solitaire mahjong often called Shanghai Mahjong.

Our tiles set on the classic theme is the standard tileset used by Chinese mahjong games and the art on that was even made for us in China. However, in our original Mahjong Deluxe, still our most popular game, we use 144 tiles set in all puzzles (including the flower and season tiles).

In Mahjong Deluxe 3 we eliminated the extra flower and season tiles as you can match any of them with any of them.  This was to make it simpler and introduce the concept to a wider audience.

2. How many versions of mahjong are there in this game app?

In this game, there is just the classic version. In our original Mahjong Deluxe, there is a classic and barnyard version.

We originally had these as separate games, but Apple had us consolidate them. We had some other standalone versions, but classic and barnyard were the two most popular.  Probably 85% of users play the classic version and 15% play the barnyard theme.

We usually get requests to add more puzzles much more than other themes or tilesets. We had done a barnyard version of Mahjong Deluxe 3 but did not add it into the classic version as demand was not that high.

3. Where are the rules? I find it a little hard to learn as I play. How long does it take until you get the basic rules down and don’t do mistakes every turn?

The rules are covered in the basic tutorial found in level 1, game 1. The basic rule of Mahjong Deluxe 3 Go is that you find matching tiles.  Any tiles that have a tile above or on both sides are locked and cannot be matched.

If you want to see the tutorial again, you can replay level 1-1.

In our 3d puzzles in chapters 7 and 8, the tiles are not locked from the sides or any direction and all tiles are open.  This worked much better for this puzzle style.

4. How much does the game depend on luck and strategy?

I think there is for sure a certain amount of strategy involved.  The biggest thing to do is focus on the widest lines first so you get those done as early as possible. Otherwise, you may end up with a puzzle that reshuffles more.

I also like to focus for awhile one bamboo, then on the circle tiles, then on character and dragons as opposed to finding any match. For me at least this helps me be a little more efficient and remember where tiles of that set are as I find matches.

The order of sets and when to switch is maybe something that you get a feel for the more you play.

1. Is this game played the same way as the real tile version?

You could play the real tile version this way (except for the 3d puzzles in worlds 7 and 8 which is our own invention).

However, you would need to lay them out manually by yourself or have someone do it which seems like it would be tedious. Also, if you get to no matches we auto reshuffle, this would not happen in the real world.

2. What’s an “average” point-difference after a match?

We base our stars on play experience of very focused players.  Since each puzzle has a different amount of tiles and complexity, it is tuned per game level.

3. How often does it come to a draw or your hand not reaching tenpai?

We auto reshuffle so all puzzles can be played until they are finished. By focusing on widest lines first you should be able to get through many puzzles without any reshuffle.

This is ideal as reshuffle does not reduce counter, but then you have to start finding everything again.

4. How long does a usual match last?

Whereas in our original Mahjong Deluxe, I personally try to get all puzzles done in under 3:15, but 3 stars is under 5 minutes, 2 stars under 6 and 1 star under 7 minutes.

However, in Mahjong Deluxe 3 you have many puzzles sizes from small (in chapter 1) which can start at less than 30 seconds to very large in chapter 6 which can take up to 15 minutes.

The 3d puzzle in chapter 7 and 8 also increase in size and time as you go further in.

5. What is a winning hand in Mahjong Deluxe 3?

There is not exactly a winning hand. Every puzzle can be completed given the time. The amount of stars you get is based upon the final score which is mainly determined by the speed of your matches.

Yes. You can play the game in any order you want. I would recommend doing the puzzle level 1, game 1 just to see the tutorial.

But you do not need to play puzzles in any order and can skip straight to bigger puzzles or even 3d puzzles in chapters 7 and 8 as you desire.

7. What Constitutes A Complete Set of Tiles?

A complete set of tiles in real word Mahjong would be a set of 9 bamboo tiles, 9 character tiles, and 9 circle tiles along with 3 dragon tiles, 4 season tiles, 4 flower tiles, and 4 wind tiles.

We auto reshuffle so all puzzles can be played until they are finished. By focusing on widest lines first you should be able to get through many puzzles without any reshuffle.

This is ideal as reshuffle does not reduce counter, but then you have to start finding everything again.

2. What happens when the match number (countdown score) hits zero?

If it gets down to zero you get no points for your next match.

However, this is a great time to maybe find your next few matches so you can get several matches in a row very quickly and at high points.

3. Can I turn off the timer and play at my own speed without getting scored?

You can turn off the timer in the pause menu.  It is the 3rd button up.  We still show the ongoing score, but you do not see the decreases in the countdown score. So by turning off the time, you reduce the stress of seeing that countdown. That’s how many people play Mahjong games–just to relax.

4. Do you have tips for being able to go faster and get higher scores?

The biggest thing to do is focus on the widest lines first so you get those done as early as possible.

Otherwise, you may end up with a puzzle that reshuffles more.

I also like to focus for a while on bamboo tiles, then on circle tiles, then on character tiles and dragons as opposed to finding any match. For me at least this helps me be a little more efficient and remember where tiles of that set are as I find matches.

The order of sets and when to switch is maybe something that you get a feel for the more you play.

Also, taking the time if the score does get to 0 to plan your next moves.  This is hard to do sometimes as you have your adrenaline going.

5. How do you reset scores and stars and start the game fresh?

In the chapter selection screen (the 8 chapters) there is a button that is a star with an undo on it in the bottom right.

Tapping this button will open a prompt that allows you to reset all of the scores.