You are here: Home / iPad / How to Listen to Local FM & AM Radio Stations on Your iPhone, iPad or iPod

That’s actually a little-known fact among Apple users, but it’s a welcome and awesome feature that you should definitely take advantage of.

Apple has actually introduced the ability to listen to live radio stations in iOS 12, although it was only rolled out in select countries. It’s now available in a much broader range of regions in iOS 13 and iPadOS — so that probably means you can use it.

The feature doesn’t use the airwaves. Instead, it pulls live radio streams from third-party sources like TuneIn, iHeartRadio and Radio.com.

That means you can forego third-party apps like TuneIn or iHeartRadio and just use the native Apple Music app in iOS. (It also means that Siri voice commands support live radio, but we’ll get to that in a bit.)

Arguably the best thing about live radio is that you don’t actually need to pay for Apple Music subscription to access it. That’s right. As long as you have an iPhone or iPad, you can listen to radio stations through the Music app for free — even if you’re, say, a Spotify user.

This also applies to Beats 1, Apple’s own music channel that’s definitely worth a listen in addition to your favorite location stations.

A few things to note

Listening to live radio stations on your iOS device is actually incredibly easy, but there are a few things you need to keep in mind.

How to play radio from the Music app 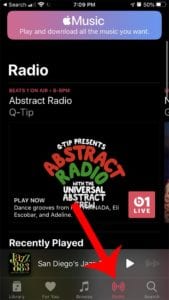 Playing live radio stations from the Music app couldn’t be simpler. Here’s how to do it.

It’s at this point that you’ll probably notice that your favorite radio stations likely don’t appear on the Radio homepage. 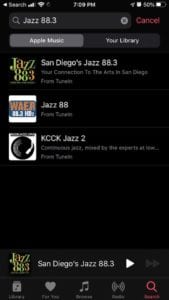 So just click on the Search tab and type in the name of your local radio station. If it’s available on Apple Music, you should see it appear.

How to ask Siri to play radio 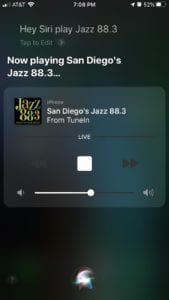 You can also ask Siri to play your favorite local radio stations. And it’s pretty much just that simple.

That being said, some users appear to run into problems getting the digital assistant to actually play their station of choice. So here are some tips to get it to work.

That’s pretty much the gist of listening to Live Radio on your iOS device. But if you’re having trouble getting it to work, here are a couple of things to note.

Double-check that your station is supported

While TuneIn, iHeartRadio and Radio.com support quite a large range of radio stations, they don’t have every single station.

We recommend looking at each individual service to see what stations in your area are supported. If they’re not on the list, you won’t be able to listen to them from your iOS device.

As we mentioned, it’s helpful to know both the callsign and the station number of the radio station you’re trying to listen to.

A great resource for finding local radio stations in your area (or other areas) is radio-locater.com. You can see the name, genre, call number and other information about each station.

Make sure that it’s supported in your country

Unfortunately, the Live Radio feature in iOS 13 is not currently available in all regions.

Apple maintains a support document with a list of all currently available Apple Music features — including Radio — on its website.