Maybe this one change in macOS Sierra slipped by until you needed it most. Or maybe you didn’t discovered this little shift until you tried to install a favorite app that you didn’t download from the mac app store.  Whatever the manner, you learn the hard way that macOS Sierra’s made invisible the usual method to open apps downloaded from anywhere! 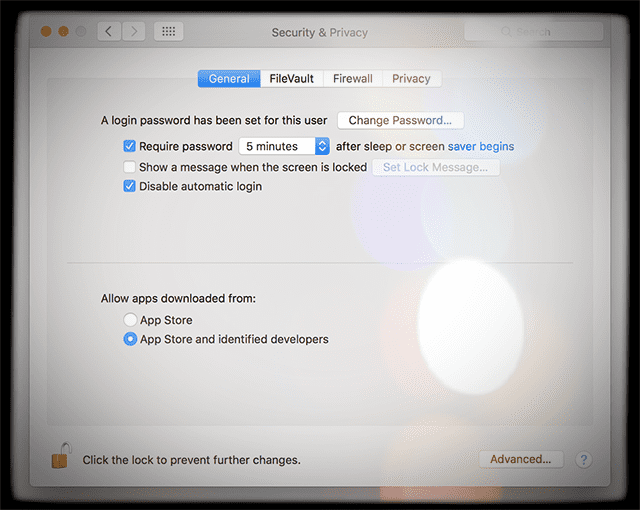 The settings was until recently found in the General tab of the Security & Privacy System Preference.  But no more, not with macOS.  So if you really need that app and can’t figure out how to get it open, it’s frustrating.  No, it’s very frustrating that our macs just aren’t working the way the used to!

Since OSX Lion, Apple’s mac operating system includes a security tool named Gatekeeper.  This feature prevents downloads of software and apps from unidentified developers. Gatekeeper assumes the app is trouble when the app you want to download is not signed with Apple. And it does not allow that app onto your mac computer.  For most mac users, this is a very good thing and helps keep their computers safe and secure.  But their are a lot of us iFolk who absolutely need and want the ability to download AND open apps downloaded from anywhere.

So What is this Gatekeeper Anyway?

In theory, Gatekeeper protects your mac from apps that potentially have adverse affects. It works by not allowing unsigned apps from downloading and opening on your mac. Apple prefers that all 3rd party apps go through its signing process. Developers register with Apple and a unique Developer ID identifies each developer.  This ID is then used in testing and validating the app for Apple products.  Apple reviews, approves, and accepts all signed apps. Once accepted, the app then officially supports Gatekeeper. And users are able to download and open these apps via the mac app store. 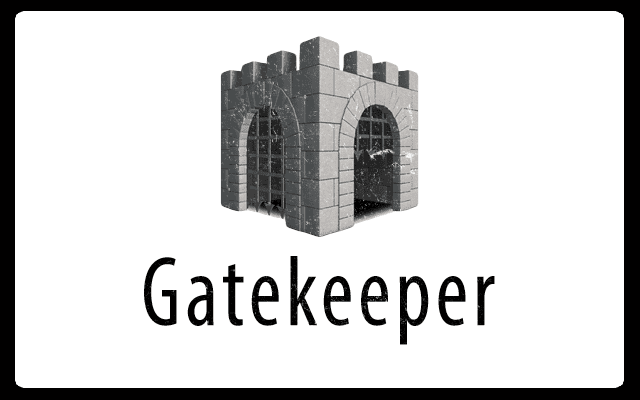 Apple views this method as the safest and most reliable to download new apps onto your mac computers.  They believe that downloading apps exclusively from the mac app store translates into reduced hazard.  And since Apple’s reviewed the app, if there’s ever a problem, Apple quickly removes it from the mac app store.

Consequently, if an app is developed by an unknown developer with no Developer ID, Gatekeeper blocks that app from being installed and opened.  However, there are a lot of great apps out there, particularly open source apps, that for numerous reasons are not available via the mac app store.  Many of these third-party apps are thoroughly tested and have worked on macs and other computers for ages. Either by choice or chance, these apps are not currently available in the mac app store.

What About the mac app store?

It’s easy to think that the mac app store works exactly like the app store for iPhones and other iDevices. But not so!  Since the mac app store opened, mac computers have always allowed you to install applications not available in the store.  Before there was a mac app store (2011), installing applications via third-party websites or installation discs was the norm.  Plus, developers must pay a percentage to Apple when you purchase apps from the mac app store. When purchased directly through the developer, there is no additional fees for Apple, keeping costs lower for all of us users.  So for these reasons and more, many apps are not included in the mac app store. 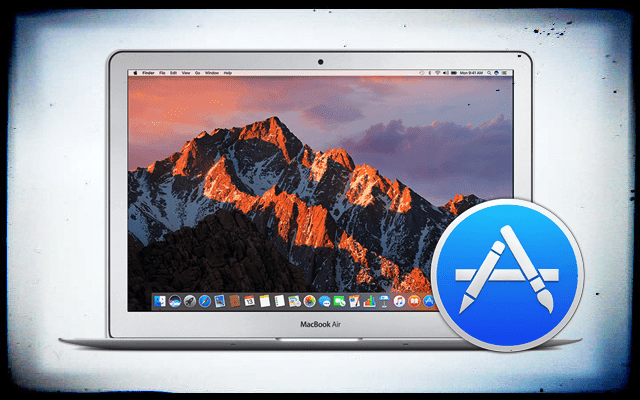 Mac users continue (and will continue) to get apps directly from developers sites or old-school via installation discs. The  long and short is that the mac app store is not the only way to get apps.  So getting around this macOS default is pretty important!

Where is Setting to Open Apps Downloaded from Anywhere?

In previous versions of its mac operating system, there was a checkbox option in System Preferences>Security & Privacy allowing you to download apps from anywhere.  However, macOS Sierra introduced a Gatekeeper that’s a heck of a lot more strict than in the past.  In this newest os incarnation, Gatekeeper defaults to only allowing options for apps downloaded from the app store or the app store and identified developers. So for us iFolk that want or need to download an app from a source we trust but Apple currently does not trust (or identify), what to do?

We need that third option, the option to “allow apps downloaded from anywhere” that seemingly disappeared with our update to macOS Sierra. 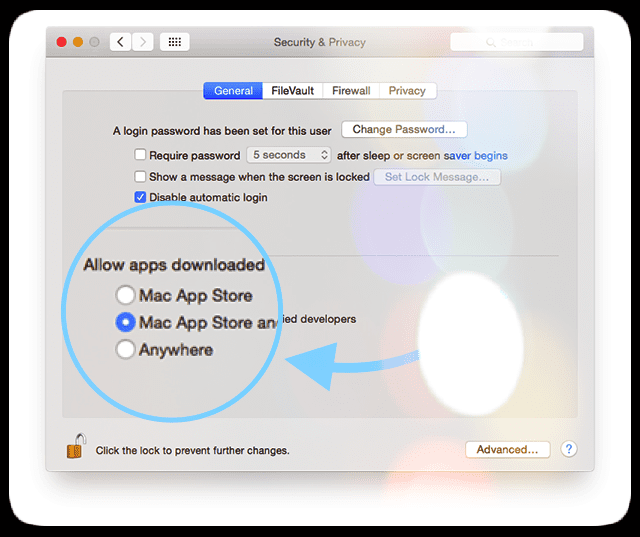 Luckily, there are a couple of ways to circumvent Gatekeeper’s defaults so when we want or need to, we can indeed open apps downloaded from anywhere.

How-To Open apps Not Available in the app Store

So if your trust the app and its unidentified developer, then there is a really easy way to open that app.

And it’s surprising how simple this method is and basically involves a single click.  To selectively bypass Gatekeeper, just Control Click (or Right Click) and choose Open from the menu options. A message appears warning you that the app is from an unidentified developer and asks if you are sure you want to open it?  If you are confident in the app’s source, click Open. That’s it! 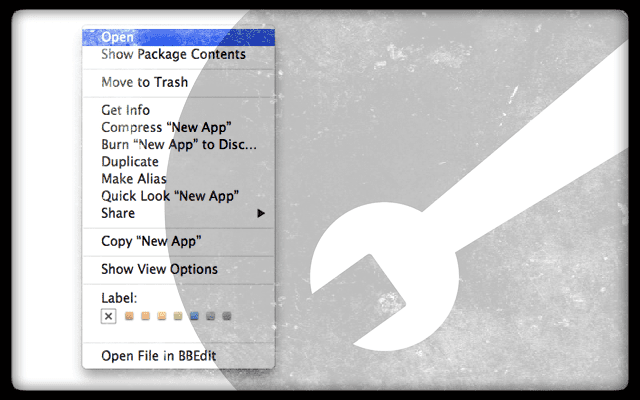 This option works for single apps.  It does update your computer’s internal list of identified developers so in the future, macOS recognizes the developer as “identified.” But this method does not make universal updates to your Security & Privacy System options.  It’s a one and done option, for times when you want or need to download and open a particular app that is currently NOT available in the app store. (i.e. the app is not signed.)

Another, Slightly Longer Way to Open apps Downloaded from Anywhere

Assuming you trust the app, after downloading move it to your Applications folder.  Now, try to open it.  You likely see a warning that the app “can’t be opened because it is from an unidentified developer.”  Select OK.  But this does not actually open the app. 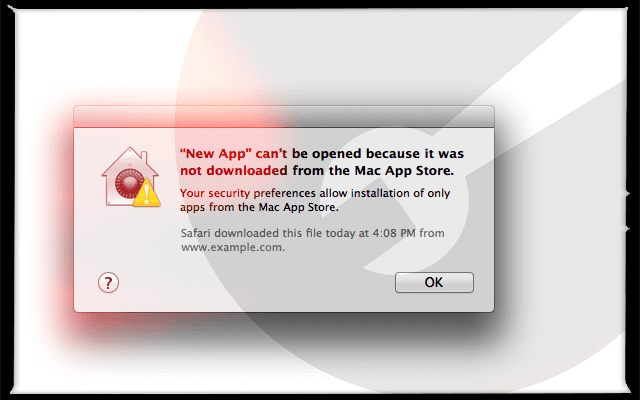 Now, go to System Preferences>Security & Privacy and select the General tab.  Look at the section “Allow apps downloaded from:” and see if the app you just attempted to open is listed with a button “Open Anyway.”  If so, click this button to open that app.  Be aware that the “Open Anyway” button is only available for around 1 hour after you first try to open the app. 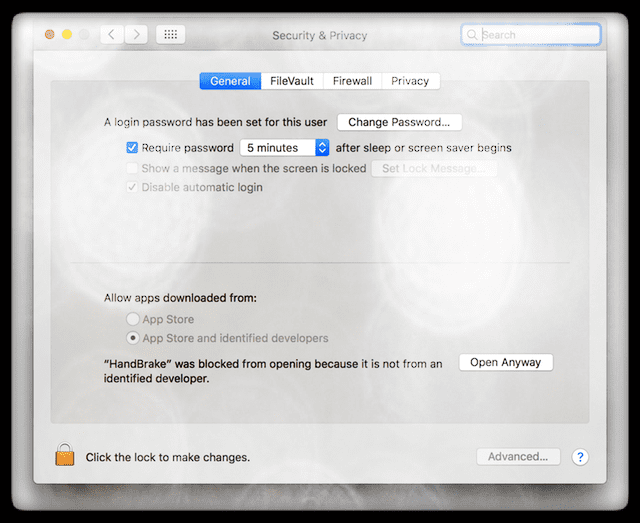 macOS takes note of that app and developer and add it to the operating system’s list of identified developers (for this mac only.)  If you ever download another app from this same developer, macOS checks this internal list.  If the developer is listed, macOS open any app from that developer.

About the Unidentified Warning Message

When you open an app that is not registered with Apple by an identified developer, you see a warning message box. Seeing this message does not mean there’s something wrong with that particular app. Developers wrote many of these unidentified apps before developer ID registration began. And others choose not to register for various reasons from cost (Apple charges a yearly developer fee) to conviction. 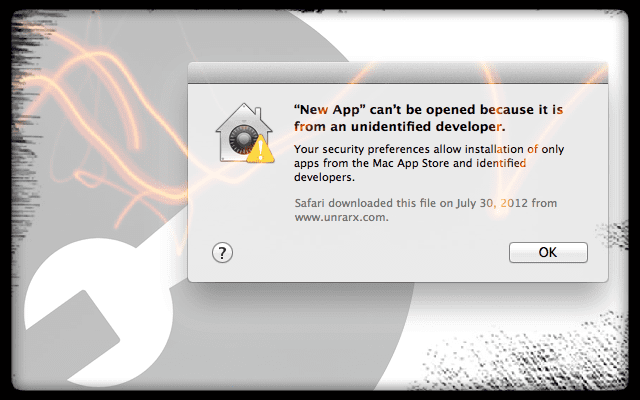 The unidentified developer warning means that the app you want to open has not been reviewed by Apple. Consequently, macOS is not able to check and verify if that app has been modified or broken since it was released.

Once you open an unidentified app, that app is saved as an exception to your security settings. From now on, you open it by double-clicking as normal.

Terminal Is At Your Command to Open apps Downloaded from Anywhere

Use Terminal to update our Security & Privacy options to include the checkbox allowing us to open apps downloaded from anywhere.  And it’s actually pretty  simple to make this modification.

Although simple, for the average mac user this step is not recommended .  Before you download and open an app that Apple does not currently recognize or identify, make sure you (or your company) fully trust the app’s source and its validity. Modifying this security setting puts your computer at potential risk and makes your mac more vulnerable to some malware and other malicious junkware.  So, proceed with caution and double (or triple) check the trust factor of any app before downloading and opening. 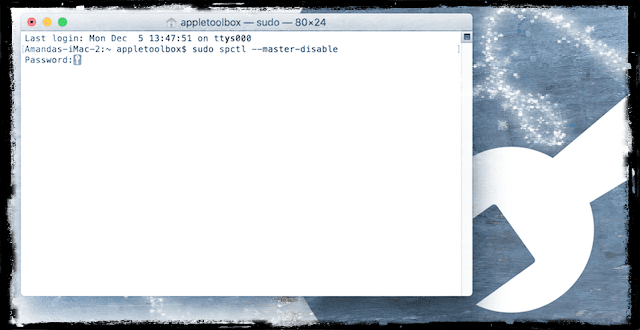 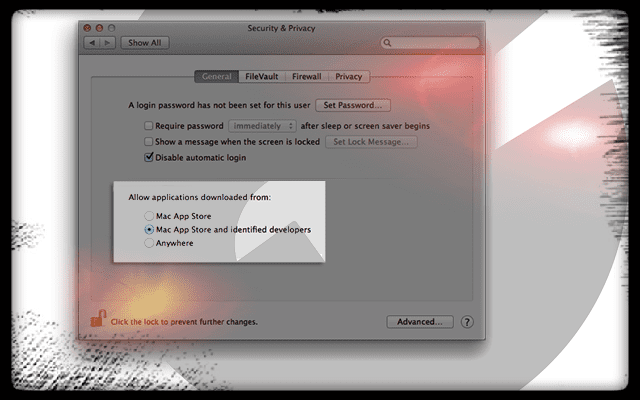 To go back to the macOS default settings, repeat the steps above substituting step 3 with enable instead of disable at the end of the command.

This returns macOS Gatekeeper back to its strict default and disallows unsigned apps from downloading and opening.

Checking the status of Gatekeeper 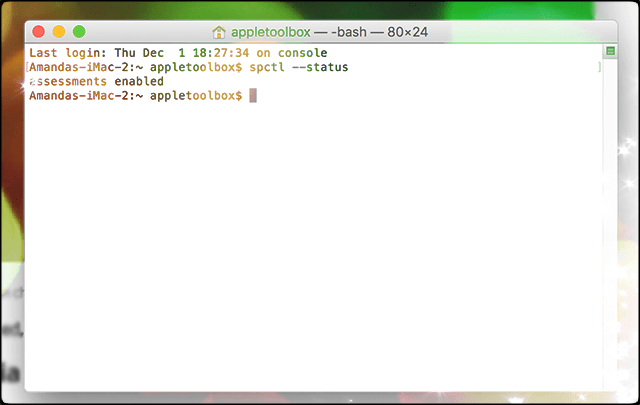 A Word For the Wise

When you receive the message “app can’t be opened because it is from an unidentified developer,” take a close look at that app and ensure that you trust its source before downloading and opening. This warning is there to protect your computer and you from harm and malware, so don’t just simply ignore it.  Be mindful and careful when downloading apps not currently offered on the mac app store.