You are here: Home / iPhone / iPhone: How to Remove Yourself from a Group Text

Group messages are a handy way to communicate, but if there are more than two or three people, they can get busy quickly. If you’re getting notifications for every new message, this can be overwhelming.

Sure, you can turn off your notifications, but this isn’t a perfect fix. What if you’re waiting for an important message from outside the group? Fortunately, you can easily leave group messages on iPhone. If you only want to quiet them temporarily, we have a solution for that as well.

Before you can leave a message, it’s important to note that you can only do this with iMessage group message. If anyone in the group is not using iMessage, this is a group SMS/MMS message, meaning you can’t leave it.

The good news is that even if you can’t leave a message, you can mute it. This applies to both iMessage and SMS/MMS group messages. We’ll look at this later in the article, but we’ll focus on leaving messages first.

How to Leave a Group Text

Leaving group messages is an easy process, but it’s slightly between iOS 14 and prior and iOS 15 or newer. We’ll look at how to do so on both versions of iOS.

One final thing to keep in mind is that you can only leave a group message as long as there are three other people in the group.

Leave a Group Message on iOS 14

Open the Messages app and find the group message you want to leave. Now tap the group icons at the top of the screen.

Now tap the Info button (a letter “i” in a circle), then tap Leave this Conversation.

Leave a Group Message on iOS 15 and Later 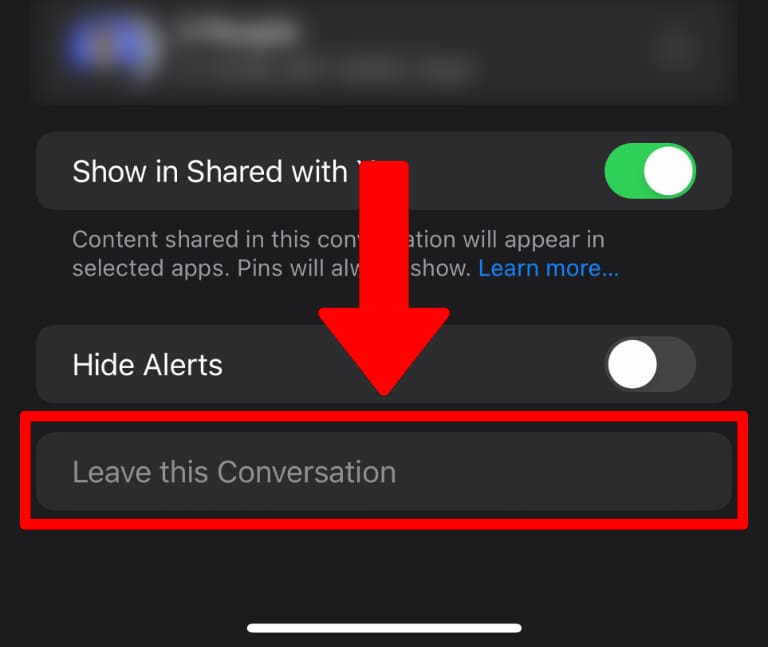 Open the Messages app, then select the message you want to leave. Tap the group icons at the top to open an options screen.

Now scroll down to the very bottom of the screen. Tap Leave this Conversation.

How to Mute a Group Text

If you want to avoid leaving a group iMessage or the message is SMS/MMS group message, you can easily mute it. You’ll still receive new messages, and you can send new messages, but you won’t see any notifications when message arrive.

As with leaving messages, the process for this is slightly different on iOS 14 and prior and iOS 15.

Mute a Group Message on iOS 14

In Messages, open the group message you want to mute. Tap the group icons at the top of the screen, then tap the Info button. Scroll down and select Hide Alerts.

Mute a Group Message on iOS 15 and Later 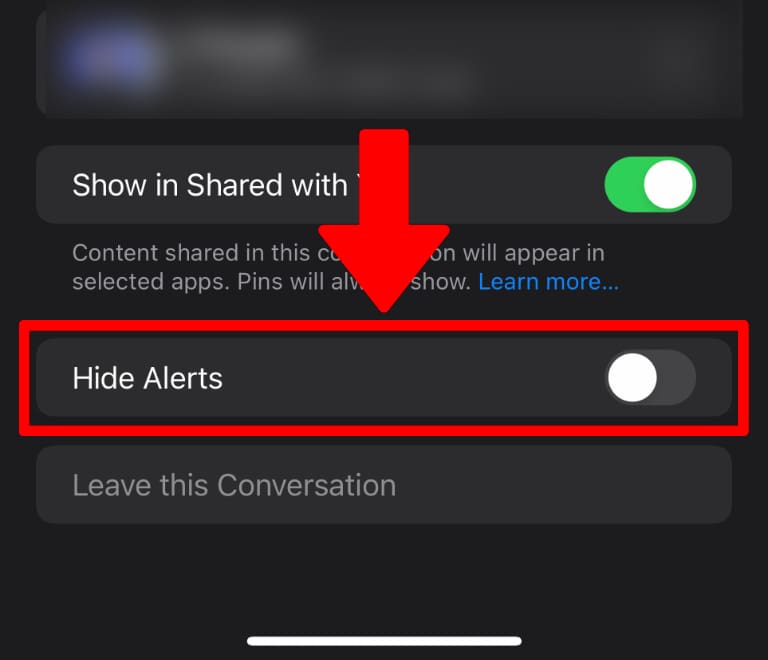 Open Messages, then open the group message you intend to mute. Tap the group icons at the top, then scroll down to near the bottom of the screen and tap the Hide Alerts slider.

If you’re new to group messages, take a look at our guide to using iMessage Group Chat on iPhone and iPad.