You are here: Home / Reviews / The Apple Watch SE Review: Is Your Next Upgrade A Downgrade?

Last Thursday, I received my Apple Watch SE in the mail.

I was tempted to write a review that night, but I decided to wait at least a few days so that I would be able to offer more than surface-level insights.

This is my first Apple Watch, so I will be writing this from the perspective of having never owned Apple’s wearable. I have a sneaking suspicion that most people considering the SE are new to Apple Watch, so hopefully, my fresh perspective will give you an idea of what to expect.

I’ll start with my initial impressions, to give you a general idea of what to expect when your Watch arrives, and then I’ll get into what I like and what I don’t.

It took nine days for my Watch to arrive, which was sooner than Apple predicted but a day later than UPS predicted. 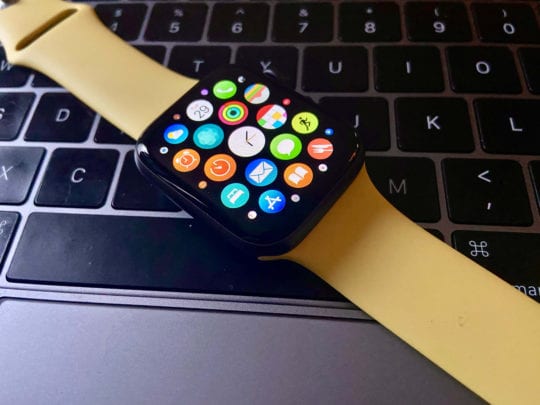 The packaging was, of course, very pleasing to open and recyclable.

The setup was straightforward, though slightly longer than I expected. Pairing the Watch to your iPhone takes just a few seconds, but setting it up involves a lot of waiting and tapping, probably twenty minutes in total.

What do I think so far?

I like it! I had been wanting an Apple Watch to work on my fitness and to spend less time on my phone, and I have been surprised by how much of an impact it’s made on both of these in just one week.

As you can probably guess, the hardware and software are both top-notch and feel great. Even the band surprised me with how nice it feels. The battery lasts slightly longer than one day and charges quickly, so you don’t miss too much tracking when it’s on the charger. I’ve been charging my Watch while I shower and haven’t gone below a 20% charge with this routine.

There are things I don’t like about the Apple Watch SE (which you can read more about below) but overall, it exceeded my expectations and was definitely worth the three digits I dropped on it.

After using it, however, I do not see myself ever buying a non-SE version of the Apple Watch. I had a feeling that it wasn’t quite worth $400+, and I can testify that I think this price is too high for the gap the Watch fills (notifications + fitness).

So long as Apple keeps selling an SE Watch, I will continue to be an Apple Watch customer.

I already touched on this, but I think the Apple Watch SE’s pricing is perfect. Unlike the iPhone, which can easily last four years with a battery replacement in between, the Apple Watch tends to have a shorter lifespan of around two years.

Even with the disposable income to buy an Apple Watch, it’s hard to feel good about spending upwards of $400 on something that I’m going to throw away two years later.

This is especially true when you factor in what it is you do with the Apple Watch. The Apple Watch is basically a fitness tracker and pager. That kind of use just doesn’t justify $400 in my mind, but it’s passable at $279.

In short, Apple nailed this pricing.

I spend 55% less time on my iPhone

I had thought that the fitness component would be the most noteworthy aspect of owning an Apple Watch, but it’s actually been how much it’s cut my iPhone use. When I checked my Screen Time stats before writing this article, I saw that I’ve spent 55% less time on my iPhone each day than I spent in the previous week. 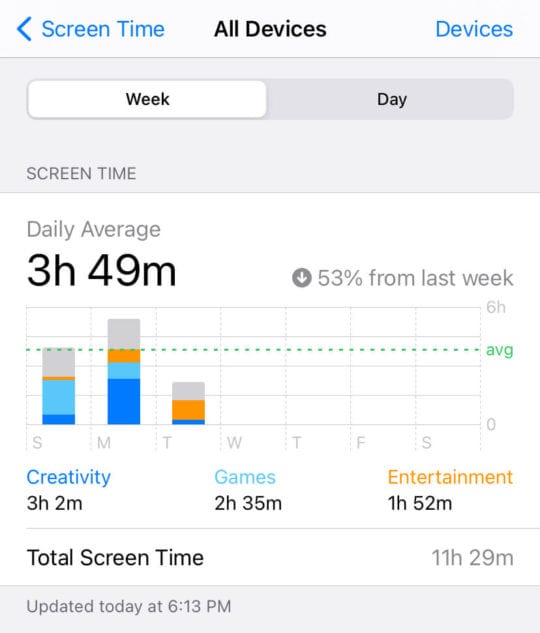 I’ll admit that I struggle with screen addiction – I tend to average anywhere between six and eight hours on my phone every day. I hate this habit and knew that it was eating away my time, but didn’t realize how much of my day was being wasted on my phone.

This week I’ve spent more time cooking, playing games with my roommates, going for walks, and working on projects than I have in a long time, and it’s pretty clear that the Apple Watch played a big part in this. It allows me to do everything I need to do on my iPhone – and nothing else.

Tying into the previous point, the Apple Watch SE feels much, much more natural than an iPhone. When I get a notification, I peek at my wrist and decide to ignore or tap on the notification. I don’t reach in my pocket, I don’t get absorbed in a screen, I don’t see a page filled with candy-colored apps every time someone texts me.

This carries into other areas of my life, too. When I’m cooking, it’s simpler to set timers, add to my shopping list, and look things up with my Watch. The reminders from the Breathe app are easier to stick to than the meditation app on my iPhone, and tracking my workouts is effortless.

Maybe everyone who picks up the Apple Watch SE won’t share my feelings, but for me, it’s a more human approach to the digital age.

The iPhone is an interruption to my life, the Apple Watch is an addition.

Of course, you can’t talk about the Apple Watch without touching on fitness. For me, fitness means yoga at least once every day, with occasional walks, runs, and bike rides when I want to go outside. 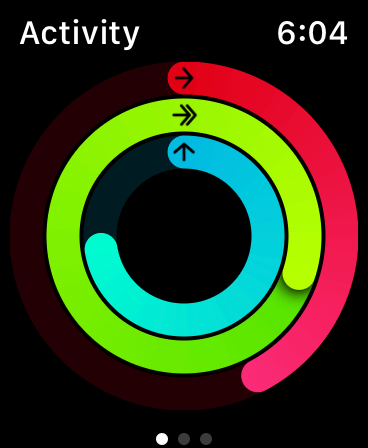 Apple Watch SE tracks these exercises in the Workout app. You choose an exercise like yoga, outdoor walking, swimming, dance, hiking, etc., and the Watch starts logging the exercise. My Watch even noticed when I was going for a long walk the other day and asked me if I wanted to log a workout, which was a nice touch.

Overall, I wouldn’t say the Apple Watch SE exceeded my expectations in this department, but it’s met them perfectly. It seems to be accurate, has all of the options and features I need, and gives me more insight into my progress.

The last thing I expected to be writing to you about was the Apple Watch band, especially since I grabbed the basic Sport Band. But wow, was this far more comfortable than I expected.

Like most, I wear my Apple Watch all day and have to say that the silicon band is wonderfully soft and comfortable. I hardly notice it’s there.

Case in point: My Apple Watch is charging as I write this, and every so often I grab one of the loose ends of the band to rub it between my fingers.

The interface and integration

Last but not least, I was surprised by how natural the interface feels. It took the first day to get the hang of it, but now I hardly notice it. The Apple’s engineers are masters at accomplishing a lot with very little, and the two-button system on the Apple Watch is a testament to this.

I’ve also been surprised by the integration, which is something else that Apple has mastered. When I play a song on my phone, my Apple Watch turns into a remote, letting me change the volume by spinning the crown. When I use the remote camera app on Apple Watch, my Watch becomes a viewfinder for my iPhone.

With the good stuff out of the way, it’s time to get into the nitpicks. These are real frustrations I’ve experienced, not things I’ve cherry-picked to fill up a complaints sections, and I hope they’re addressed in future updates.

Raise to speak to Siri

This is one of those simple features that should be incredibly convenient but instead is endlessly frustrating. Maybe I’m “doing it wrong”, but I can not get this to activate consistently. Sometimes it works so seamlessly I feel like the year is 2050, and other times I look like an idiot at the laundromat, repeating myself to my wrist.

I’ll continue trying this out to see if I can practice it enough to nail it every time, but more than likely I’ll give up on this in a week and resort back to “Hey Siri”.

The App View (or “Home Screen”)

This might be divisive, but I do not like the App View on Apple Watch. For those who haven’t used it, the Apple Watch’s home screen is a bunch of small, circle app icons in a big cluster. 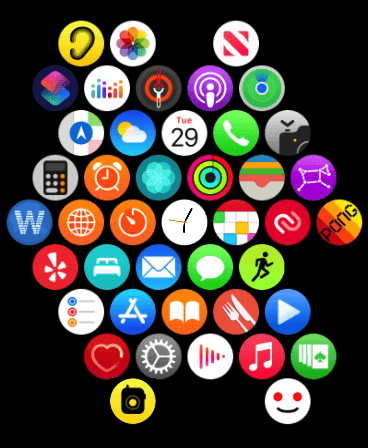 There’s no app library, organization, or easy way to skim through your apps. You just drag these circles around until you find what you’re looking for.

To be fair, you can reorder these icons as you like, and you can also switch to a list view for your apps in the Settings. I also don’t find myself going through the apps on my Apple Watch very often. But when I need to, dragging them around is tedious, as is the list view.

I’ll admit that I don’t have a better solution, but the App View to me feels off. It’s pleasing to look at, but for me, it’s too unstructured.

I can’t delete most stock apps

I was surprised to find that I can’t delete the vast majority of pre-installed apps on the Apple Watch SE. Instead of getting into why I don’t like these apps or how annoying it is to have them cluttering the App View cluster (which I already don’t like), but instead, I’ll just give you a list of every stock app you can’t delete on Apple Watch:

That’s twenty apps (minus Settings and the App Store) that you can’t get rid of.

The dependence on AirPods

Lastly, I find the Apple Watch’s dependence on AirPods to be pretty annoying. If you already own AirPods, then this won’t bother you at all.

I grabbed a pair of AirPods in 2017 and loved them for the first year. During the second year, the battery in each AirPod started dying within an hour, and the microphone on both buds stopped working. Considering I spent $159 on them the first time, I decided not to buy them again, and have been perfectly happy with wired headphones ever since.

What bugs me about the Apple Watch is that it doesn’t recognize when I’m using wired headphones on my iPhone. Let me give an example. If I start playing music on my iPhone, music controls appear on my Apple Watch. Convenient, handy – I like this feature.

However, if I have my phone in my pocket and my wired headphones connected to it, I can’t start playing music on my iPhone from the Music app on Apple Watch. If I try to, it’ll just search for AirPods and fail. The same goes for Podcasts, Audiobooks, and any audio-based app.

I know from making phone calls on my Apple Watch that it has a decent speaker. But it won’t even try to play music out loud, instead continuing its search for non-existent AirPods.

If there’s one thing I don’t want to be frustrated by, it’s music. And though it may seem small, it’s one of those things that becomes more annoying the longer I use the Watch.

Should you buy the Apple Watch SE?

In my opinion, the Apple Watch SE is a great buy. After just one week, I can already tell it’s up there with the base iPad as one of Apple’s best products. It’s simple, does exactly what it’s advertised to do, and does so extremely well, all for a semi-affordable price.

If you’re looking to spend less time distracted on your phone and want to spend more time exercising, meditating, and moving throughout your day, the Apple Watch SE is your iPhone’s best friend.