However, there was one thing that Apple decided to leave out of its latest wearable device that has fans divided.

Does the Apple Watch Series 6 have a charger?

During the environmental portion of Apple’s Time Flies event, a segment where the company discusses all of its plans to be more eco-friendly, Apple informed the world that it would be removing the included Apple Watch charger in the Series 6 and Watch SE box.

Before you get too worked up, it’s important to note that this only refers to the wall adapter – you will still get a charging cable for the Apple Watch when you order it, but you will still need a wall block (or “wall wart”) with a standard USB port. So if this is your first Apple Watch, you won’t need to run out and by a cable.

Why doesn’t the Apple Watch come with a charger?

While this may sound like a money-grubbing move from Apple (and I don’t doubt that money helped motivate the trillion-dollar behemoth) it is far from the only benefit to removing the charger.

In fact, from an environmental standpoint, you could call it commendable. I don’t think it’s a stretch to say that in 2020, everyone has an abundance of USB ports and chargers lying around their home. This means that, for the most part, the included wall adapter in Apple Watch (and other Apple products) isn’t really necessary.

To put into perspective how much waste Apple can save by removing the wall adapter in Apple Watch, I decided to weigh one of my USB adapters from Apple. 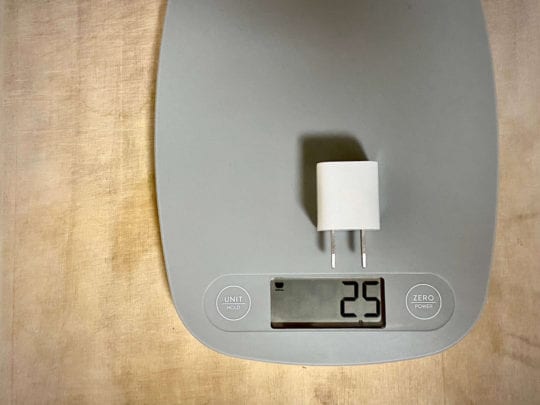 I then multiplied this amount (25 grams) by 30 million, which is the minimum reported amount of Apple Watches sold in 2019. What I found was, had Apple removed the wall adapter from the Apple Watch in 2019, they would have prevented 826 tons of e-waste. Not an insignificant amount by any means.

What does this mean for future Apple Products?

While we’ve been talking about this as though it were an Apple Watch problem, waste is a problem with consumerism in general. It just becomes much clearer at such a high level. We already predicted that Apple would make a move like this with the iPhone 12 and it now seems more clear that Apple is going to start removing in-box accessories with its devices.

I wouldn’t be surprised if other manufactures start to make similar decisions moving forward. It’s a known phenomenon within the tech world that whenever Apple makes a decision, the rest of the industry will most likely follow suit.

It may seem frustrating at first to get less for the same price (and I do think Apple could’ve earned some goodwill by cutting the Series 6’s price a bit), I believe that this will ultimately be a good trend for the tech industry over the long term. After all, less is more.

Does Apple Watch use Qi charging?

Will the iPhone 12 come with a charger?

While it isn’t confirmed by Apple yet, it certainly looks like the iPhone 12 will not include a wall adapter (though it will probably include a charging cable). You can read more about our thoughts on this here.

Why did Apple get rid of in-the-box chargers?

The on-the-record reason for removing in-box chargers is to help the environment, and there’s no question that removing these accessories will help the planet.