You are here: Home / iPhone / The Best Cooking Apps For iPhone

One of the best hobbies you can pick up is cooking! It’s reasonably affordable, results in tasty and (usually) healthy food, and helps you spend less time at the drive-thru. And in my experience, one of the best ways to keep up a cooking habit is to embrace cooking apps for iPhone.

While I mostly rely on cookbooks these days (I cover why later in this post), I’ve used several apps to make cooking in the kitchen fun, simple, and most importantly, delicious. Plus, you can avoid all of the annoyances that come with trying to find a recipe on Safari (seriously, no one needs your life story – we just want the recipe!).

When trying to find great cooking apps, however, I’ve found that a lot of articles just kind of mash together a list of the same cooking apps over and over. So to help, I’ve created this list of cooking apps for iPhone that I genuinely think are great. They’re also multipurpose so that you can find the app that’s right for you – as opposed to scrolling through apps that are more or less the same.

The best cooking apps for iPhone

First on this list of cooking apps for iPhone is the one I’ve used the most: Yummly. Yummly is a straightforward recipe app. You can find recipes within it, save them for later, and quickly spot the ingredients and directions. Plus, most of these recipes are curated from the internet, so you get the benefit of finding recipes on Google without needing to slog through the reading required to get to the point of most of those posts. 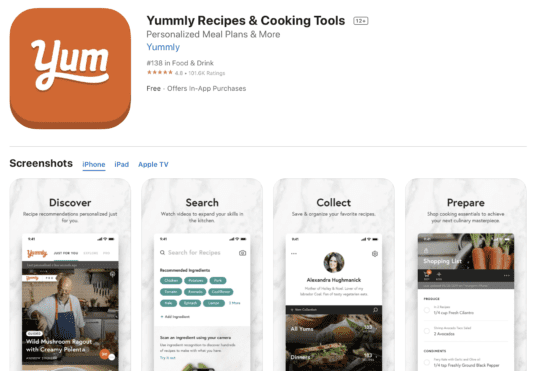 What puts Yummly at the top of this list for me, though, are two specific features:

Now, as mentioned, I do get some lame recipes with this app now and then, and they’re usually the ones that seem the simplest. I can’t tell you how many slow cooker recipes, where you just combine the ingredients and wait for them to cook, have turned out mushy and bland. But I’ve also come across sweet and sour chicken recipes or certain sauces that I’ve made over and over again for years because they were so good.

In short, I think Yummly is the gold standard when it comes to cooking apps.

Next on our list of cooking apps for iPhone is Tasty. If you’ve watched any cooking videos on the internet, then you probably already know the Tasty brand. They make addicting cooking videos on all social media platforms. Some of these are practical recipes you can make at home, and some of them are just crazy ideas that are fun to watch (i.e., “Hot Cheetos + Random Food”). 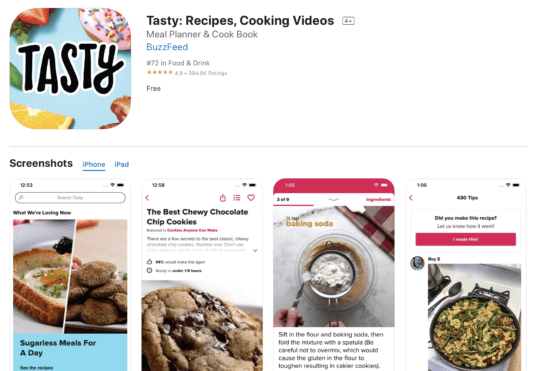 Despite the sometimes kooky nature of their videos, the Tasty app is filled with amazing recipes. These recipes are themed, too, so you can pick recipes that don’t have sugar, are great for meal planning, line up with ingredients you already have, are easy/underrated/complex, and more.

It’s also one of the most popular cooking apps in the App Store, making it a great choice if you don’t know what else to go with. It has the most “pop” appeal of the apps in this list, with a fun interface and catchy visuals/recipes. Give it a look!

For an app that matches your iPhone’s interface, there’s Kitchen Stories. This one feels like it’s straight from Apple’s developers. It’s beautiful to look at and filled with recipes you’re sure to love. 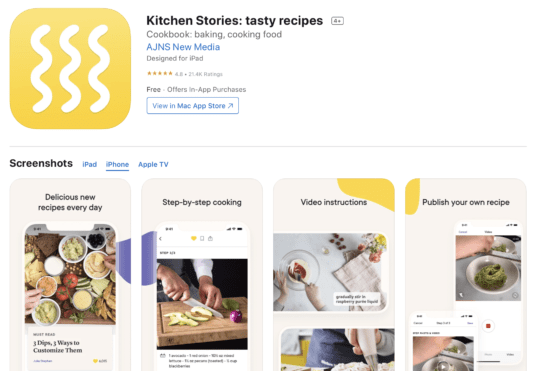 One of the unique features of Kitchen Stories is that users can upload recipes. So you can try recipes from others or share your recipes and build up a following if you’re a chef. Similar to Yummly, you can rate and review recipes, so it’s easy to avoid the lame ducks.

You can also create a grocery list in this app based on the recipes you want to cook, which is a super handy feature.

And that’s about it! This is a very straightforward app for those who are just looking for something simple and are ready to start cooking. Check it out!

Next is a bit of a left-field suggestion in our list of cooking apps for iPhone, but hear me out. Apple Books (a.k.a. the Books app on your iPhone) is a great app for finding awesome recipes. And that’s because it’s filled to the brim with cookbooks.

I mentioned it at the start of this article, but I’ve recently started to enjoy using cookbooks over cooking apps. I’ve found that you get more information on what goes into a recipe, how the ingredients pair together, and how each recipe impacts your health.

I’ve also found that the recipes in cookbooks tend to be more consistent than those you find in apps. While I may come across a stinker in an app, I rarely make something I dislike from a cookbook. These recipes do tend to be more challenging, but not so much so that it becomes an issue.

Anyway, I think you should give iPhone cookbooks a shot! Everything by America’s Test Kitchen is excellent (I’ve been using their Mediterranean book for a few weeks now with excellent results) as is Whole In One by Ellie Krieger.

Another one of the great cooking apps for iPhone is YouTube. If you’re a visual learner and would rather watch videos than read, then YouTube is essentially an unlimited resource.

You can find countless cooking tutorials for nearly any kind of food, diet, and skill level. People from all different cultures share recipes on YouTube, making it a great place to find recipes from other regions of the world.

The only challenge with using YouTube as a cooking app is quality control. It can be hard to know how well a recipe is going to turn out, especially since YouTube has disabled the dislike button.

If you’re looking for recommendations, I would offer up:

That should give you a great start for finding quality cooking tutorials!

The next item on our list of cooking apps for iPhone is Paprika. This is an app for those who already have their own recipes they want to save and share. With it, you can add and upload your recipes for easy searching, finding, and rating. 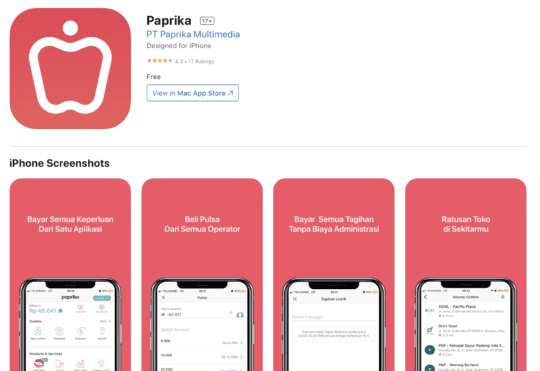 You can also use this app to create cookbooks! You can print them or simply share them as a PDF, making for a great gift to share with your loved ones.

And that’s about it! There aren’t a lot of features to Paprika since it’s focused on making it easy to keep up with your personal recipes. For that reason, I recommend this to the budding and already accomplished chefs out there!

Not Phở is an app I’ve recommended before in an old monthly best apps segment, and I had to recommend it again. 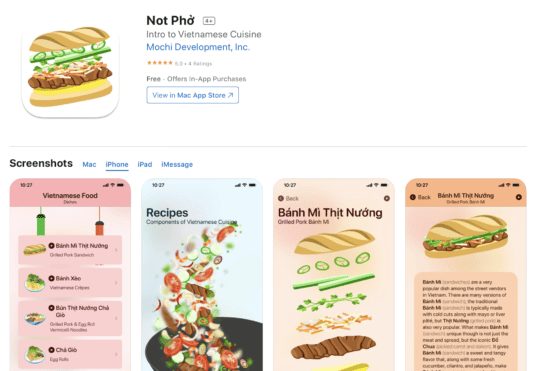 For those who didn’t catch it the first time, Not Phở is an indie app that’s collected several recipes from Vietnamese culture. Specifically, these are recipes that aren’t pho (hence the name). The reason is that many people have only experienced pho in Vietnamese cuisine.

In addition to having delicious family recipes in this app, the app itself is gorgeous. It’s super easy to find a recipe you’re looking for, and when you do you get to see these in-motion graphics that are pure eye candy.

I’ve been doing my monthly best apps series for two years now, and this is still the app that sticks with me the most. It’s an excellent app and a great one to add if you’re interested in Vietnamese home cooking.

What are your favorite cooking apps for iPhone?

And that’s it! Those are my recommendations for cooking apps for iPhone. It’s a shorter list than many out there, but that’s because I made a point to stick to apps that I feel pack some serious quality.

If I had to recommend just one app, it would either be Apple Books or YouTube since they’re the most versatile. But I’ve had just as much luck with all of the apps on this list. I hope you like trying them out!